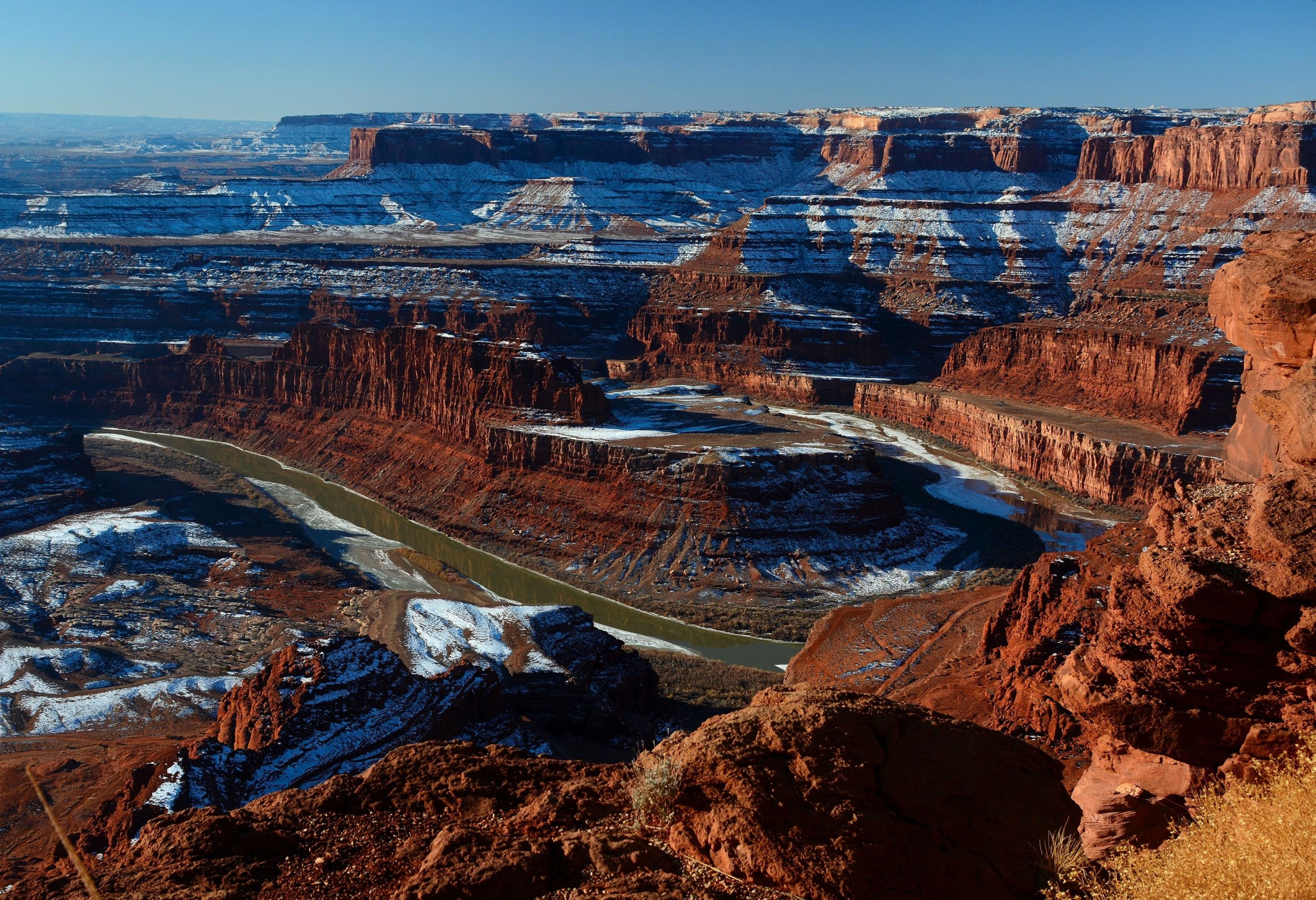 One of my favorite road trip hubs in North America is the small Utah town of Moab. It’s literally surrounded by spectacular red rock canyon country, including two outstanding national parks – Arches and Canyonlands. In addition, Moab is the operations hub of more whitewater rafting companies and 4WD tour operators than you can shake a selfie stick at. It’s also America’s mountain biking capital, with a vast network of  outstanding slickrock trails.

A small Mormon ranching and mining town just a quarter century ago, Moab has become a big-time tourism magnet full of hotels, upscale restaurants and brewpubs. If you visit Moab, plan to spend at least a few days here. You’ll need room reservations just about any time of year.

So you wouldn’t think we’d find a destination for our Road Less Traveled series in this area. Yet, despite Moab’s tourism hubbub, one of the Southwest’s finest viewpoints remains relatively uncrowded. That’s Dead Horse Point State Park, located 32 miles from Moab just off the road into Canyonlands National Park’s Island in the Sky District. It’s an awesome view that you won’t want to miss.

The setting is amazing. Two thousand feet above the Colorado River is a plateau separated from a larger plateau by a 30-foot-wide isthmus called “The Neck.” The river here makes a 180-degree meander just to the south, making for more dramatic views than you’ll find anyplace not named Grand Canyon. Cowboys used the plateau as a corral for horses. As the story goes, some horses were trapped there when someone neglected to leave the barrier open. The horses perished of thirst in sight of the river below.

The park has a visitor center, a campground, several hiking trails, and an extensive system of mountain bike trails. But the park is all about the views. From any of the viewpoints, you can see just about forever. The air is especially clear in fall and winter, as you can see from the accompanying photos, which were taken in late December 2013 just after dawn (10 degrees!)  Avoid summer; this is desert country.

The entry fee is $10 per vehicle. From Moab, drive 9 miles north on US 191, turn left onto SR 313, then drive 23 miles to the park. Four miles before the park entrance, the Island in the Sky Road to Canyonlands National Park branches off to the right. You’ll want to visit Canyonlands, too; it has less than half the annual visitation as Arches, which is just outside Moab.

This week’s road trip takes us to Fort Scott END_OF_DOCUMENT_TOKEN_TO_BE_REPLACED

You can run out of adjectives really fast when describing END_OF_DOCUMENT_TOKEN_TO_BE_REPLACED