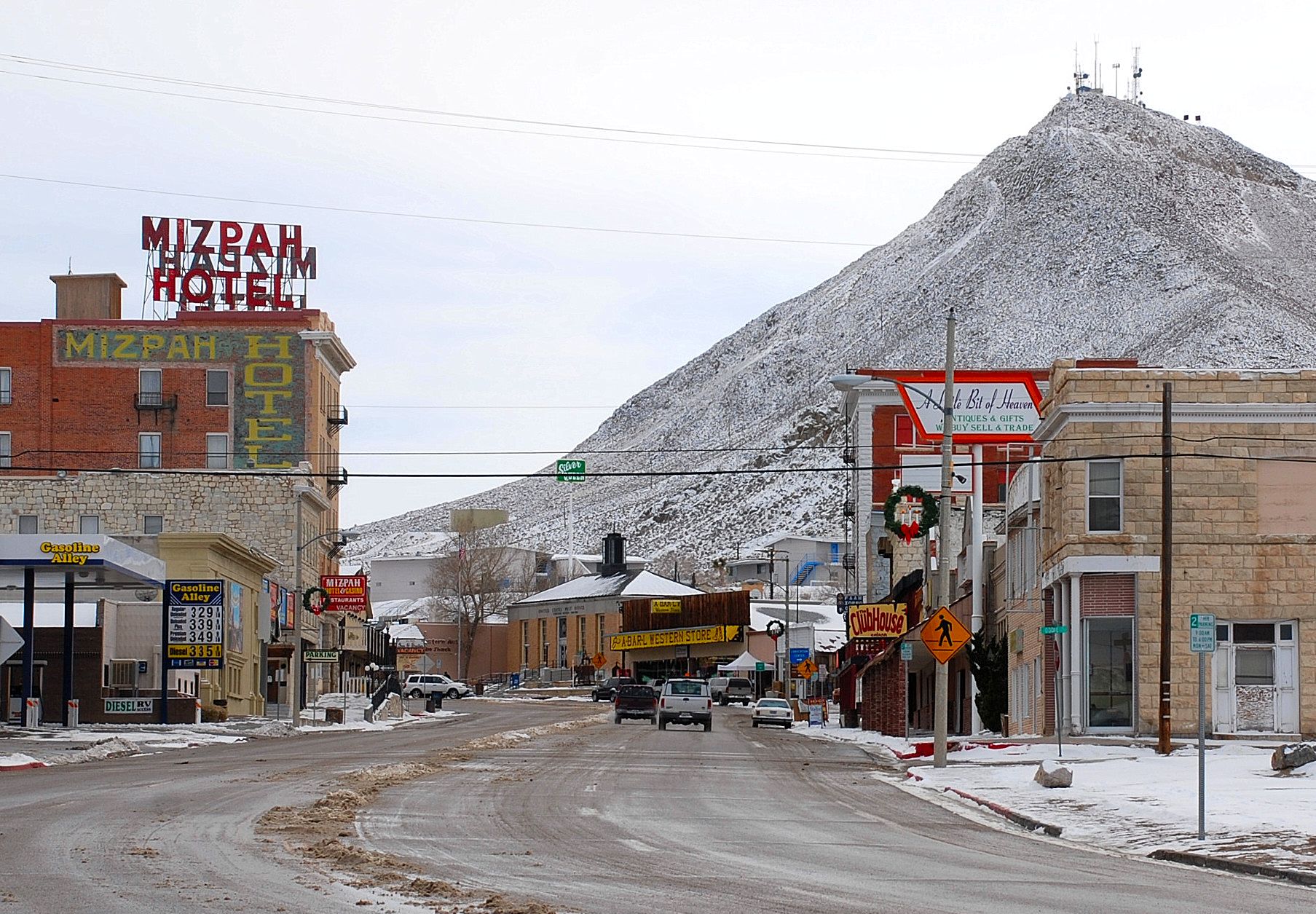 This week Road Trips with Tom heads to the funky old mining town of Tonopah, Nevada.  Some people find Tonopah homely.  Some find it fascinating.  I find it both.

Few places can more accurately be called “the middle of nowhere.”  Tonopah isn’t the end of the world — but you can see it from there.  It’s surrounded by thousands of square miles of the baddest, emptiest, most barren desert Nevada has to offer.  And that’s saying something.

Tonopah is one of hundreds of mining towns in the West that boomed when riches were discovered, quickly acquired population and a veneer of civilization, then went into a swoon when the mines began to play out.  Unlike most of the mining boomtowns, however, Tonopah never died.  It’s just circled the drain for the past 90-some years.

Another, more famous survivor, is Virginia City, 200-some-odd miles to the northwest.  Just up the road from the state capital and a short drive from Reno, Virginia City has gussied itself up for visitors and become a major tourist destination.  (We’ll have a feature on Virginia City in a few weeks.)

Tonopah is way too remote to be a day trip from anywhere or a major tourist attraction.  As a result, when its mines quit producing big numbers, its mining infrastructure was simply abandoned.  Tonopah looks like someone threw a big party then left without cleaning up.  Lonely headframes, piles of tailings and rusted mining equipment sit amid mobile homes and more permanent structures.

It’s so ugly that it’s charming.

The town that saved Nevada

Like many of the old mining camps, Tonopah has lots of legends.  In 1900 a miner-rancher named Jim Butler was doing some prospecting in the area, when his burro wandered off.  He not only found the burro, he also found an interesting-looking ore sample, which he kept but didn’t bother to have assayed until after his ranch’s hay harvest.  With help from a friend named Tasker Oddie (later to become governor of Nevada), he got the ore assayed.  The sample was found to contain silver, and the rush was on.  He and Oddie got rich by leasing claims to miners.  Many of them got rich, too.  Or so the story goes.

The chamber of commerce likes to boast that Tonopah is “the town that saved Nevada.”  Virginia City, whose fabulous Comstock Lode silver mines put Nevada on the map, had declined, and the state was bleeding population.  Tonopah, which quickly snatched the title of  “Queen of the Silver Camps,” reversed the trend and the state’s fortunes.  The boom ended in the early 1920s.

With a population of 2,500, Tonopah is still hanging in there.  Why?  One reason is county government.  Tonopah is the seat of gigantic Nye County, Nevada’s biggest.  And second, it’s a major highway crossroads at the junction of U.S.Highways 6 and 95.  Just about everyone traveling one of those highways stops here for gas, food or overnight lodging.  US 95 is the state’s most important north-south route, and Tonopah is roughly midway between Las Vegas and Reno.  It’s the biggest town on 95 between Vegas and Fallon – a distance of about 370 miles.  Its nearest neighbor with a bigger population is Bishop, California, over 100 miles west.

As a result, it’s a sure thing that you’ve arrived here after a long, boring drive across the desert.  You’re probably hungry and need to fill your gas tank.

You don’t see Tonopah coming.  The highway crests a rise, then suddenly you’re here.  The town is in a bowl surrounded by treeless mountains at an elevation of just over 6,000 feet.

Dominating Main St. is the five-story Mizpah Hotel, built in 1908 and the tallest building in Nevada until 1929.  It’s been restored and offers 47 guest rooms and a steakhouse.  According to legend, Jack Dempsey was once a bouncer here, and Howard Hughes was a guest.  Wyatt Earp supposedly hung out here, but he later claimed he left town before the Mizpah was built.  The legend also includes a ghost known as “The Lady in Red,”  a former prostitute murdered by a jealous ex-boyfriend.  It’s worth a stop just to admire the lobby.  For more, go to www.themizpahhotel.com.

There are two other worthwhile stops:  The Tonopah Historic Mining Park and the Central Nevada Museum.  Both will give you a great overview of Tonopah’s history.  The mining park has more displays, most of which are outside.  It was 103 degrees when I visited Tonopah last week, so I headed to the museum.  It has lots of interesting displays, including Tonopah’s oldest organ, along with a nice collection of books you won’t find anywhere else, if you’re interested in Western mining history and Nevada ghost towns.  It’s also air conditioned.

The Central Nevada Museum is open 9-5 Tuesday through Saturday.  Admission is free, but you should leave a donation of $5 per person.  Go to www.tonopahnevada.com/CentralNevadaMuseum.  It’s on Logan Field Road near the south end of town – visible from Main St.

To get to the Tonopah Historic Mining Park, turn east onto Brougher St. (south side of the Mizpah), go to the end, then turn left.  Hours are 9-5 daily.  Admission is $5 for adults, $4 for ages 8-17 and $3 for seniors.  Plan on lots of walking.  A highlight is an underground tunnel you can enter.  I plan to return on a cooler day later this year to visit the mining park.  The web site is www.tonopahhistoricminingpark.com.

In addition to the Mizpah Hotel, you’ll find several other lodging choices.  I usually stay at the nice but somewhat overpriced Best Western.  Or you can stay at the colorful Clown Motel next to the cemetery.  It’s been featured on the Travel Channel “Ghost Stories” series.

Probably the most popular business in town is the combination Chevron station, Burger King, Subway and convenience store at the north end of town.  You’ll find the town’s biggest casino, the Station House, at the south edge of Tonopah.  You won’t find a Starbucks here — you didn’t expect one, did you? — but you’ll find a few decent choices for food.

Another interesting old mining town is Goldfield, 40 miles south of Tonopah on US 95.  We’ll publish a feature on Goldfield in a few weeks.

Thanks for visiting Road Trips with Tom!  Next week we’ll visit the Pacific Northwest, then on August 14 we’ll present a fall foliage preview — yep, it’s time to start planning if you’re going leaf-peeping this year.

This week’s road trip takes us to Fort Scott END_OF_DOCUMENT_TOKEN_TO_BE_REPLACED

You can run out of adjectives really fast when describing END_OF_DOCUMENT_TOKEN_TO_BE_REPLACED