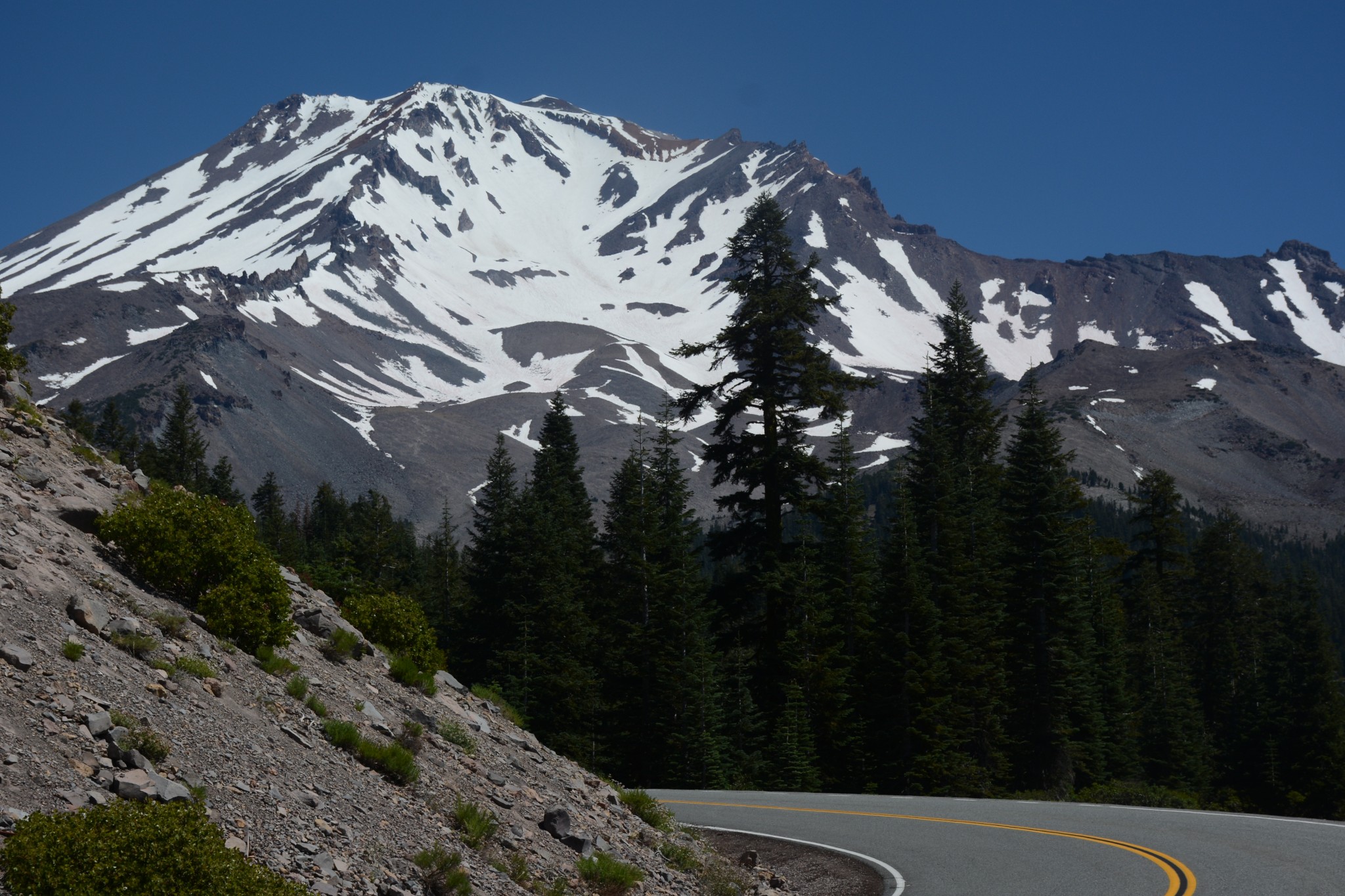 I’d originally intended to focus this week’s post on Crater Lake National Park in southern Oregon, but a wildfire near Crater Lake has caused road closures and smoky air.  It’s still burning as I write this.  The park’s busiest road is closed, and the main lodge complex has been evacuated.  We’ll come back to Crater Lake after the smoke has cleared (so to speak).  The plan was to feature Mt. Shasta in a few weeks.  We’re just accelerating the schedule a bit.

By the way, if you’re about to head for Crater Lake, check on conditions before leaving – go to www.nps.gov/crla.

Shasta, at 14,179 feet, is one of the two most spectacular mountains in the continental United States.  The other is Washington’s Mt. Rainier, which is 230 feet higher.  Both are potentially active volcanoes, part of the Cascade Range, which extends from Mt. Lassen in California to the Canadian border.

What makes both Shasta and Rainier especially dramatic is that they rise 11,000 feet above their surroundings.  Both are visible (theoretically, at least) for 100 miles or more.  Of course, Mt. Rainier is the focus of a beautiful national park, while Mt. Shasta is, well, a mountain.

But, as a Californian, I’m a bit prejudiced, and I absolutely love Mt. Shasta.  Here’s why:  You can see it!

Rainier is visible less than half the time.  I drove through Mt. Rainier National Park in June and never saw the mountain.  You’ve no doubt seen postcard shots of Seattle’s skyline taken from Queen Anne Hill with Mt. Rainier looming in the background.  Well, good luck with seeing that view when you’re there!  My first view of Rainier was from an Alaska Airlines jet, where the peak was visible poking above the clouds.  Mt. Hood in Oregon?  Same thing.

On the other hand, Mt. Shasta is just about always out.  It’s very rarely hidden behind clouds.  If you’re driving on Interstate 5, the main north-south highway in the Pacific Coast States, you can’t miss it – the interstate runs right by the base of the mountain.  I’ve made that I-5 drive-by probably 20 times and never missed seeing Shasta.

What to do at Mt. Shasta

Where are the best viewpoints?  First, there’s a signed vista point on northbound I-5 north of Dunsmuir.  But I recommend views where the north slope is visible.  That’s where you’ll see the greatest snow cover. Northside views also show the secondary peak of Shastina, which is connected with Shasta.  For a good northside view — in fact, the one pictured below — take US 97 from Weed headed toward Klamath Falls.  You’ll see some great views after a few miles.  Another excellent viewing spot is the Weed Airport, just off I-5 a few miles north of town.

There’s also a paved highway that runs 14 miles up the mountain and gives you fantastic views and access to some great hiking trails.  Take Exit 748 from I-5, drive east on Lake St., then continue as it becomes the Everitt Memorial Highway.  After 11 miles, you reach Bunny Flat at 7,000 feet, where there’s a trailhead, a large parking area, a restroom, and, in summer, plenty of people (although you can usually find a parking space there).  The road  continues another two miles to Panther Meadows, where you’ll find another popular trailhead.  Look for lots of colorful wildflowers in summer.  The featured photo at the top of this article was taken from that highway just before the road’s end.

Want to climb Mt. Shasta?  Hundreds of people make the climb every year.  There’s no quota system, and you don’t need reservations.  Mt. Whitney, this ain’t.  However, you’ll need a wilderness permit, which is available at the ranger station in the town of Mt. Shasta or at the trailhead.  To view a climbing and hiking guide, go to www.summitpost.org/mount-shasta/150188

In many people’s minds, Mt. Shasta is a powerful mountain in more ways than one.  It’s a zone of convergence where mystical forces thrive.  I won’t go into details on the spiritual stuff.  However, if you’d like to find out more, go to http://www.npr.org/2015/06/07/412098380/a-mountain-of-many-legends-draws-spiritual-seekers-from-around-the-globe.

You’ll find plenty of lodging and eating choices in the towns of Mt. Shasta and Weed.  Campgrounds, both Forest Service and county, are nearby.  The chamber of commerce has a helpful website – go to www.visitmtshasta.com.

Thanks for visiting Road Trips with Tom.

Next week we’ll have our annual fall foliage preview, which will show you where to find colorful foliage, when to go, and how to find out the latest conditions.

This week’s road trip takes us to Fort Scott END_OF_DOCUMENT_TOKEN_TO_BE_REPLACED

You can run out of adjectives really fast when describing END_OF_DOCUMENT_TOKEN_TO_BE_REPLACED