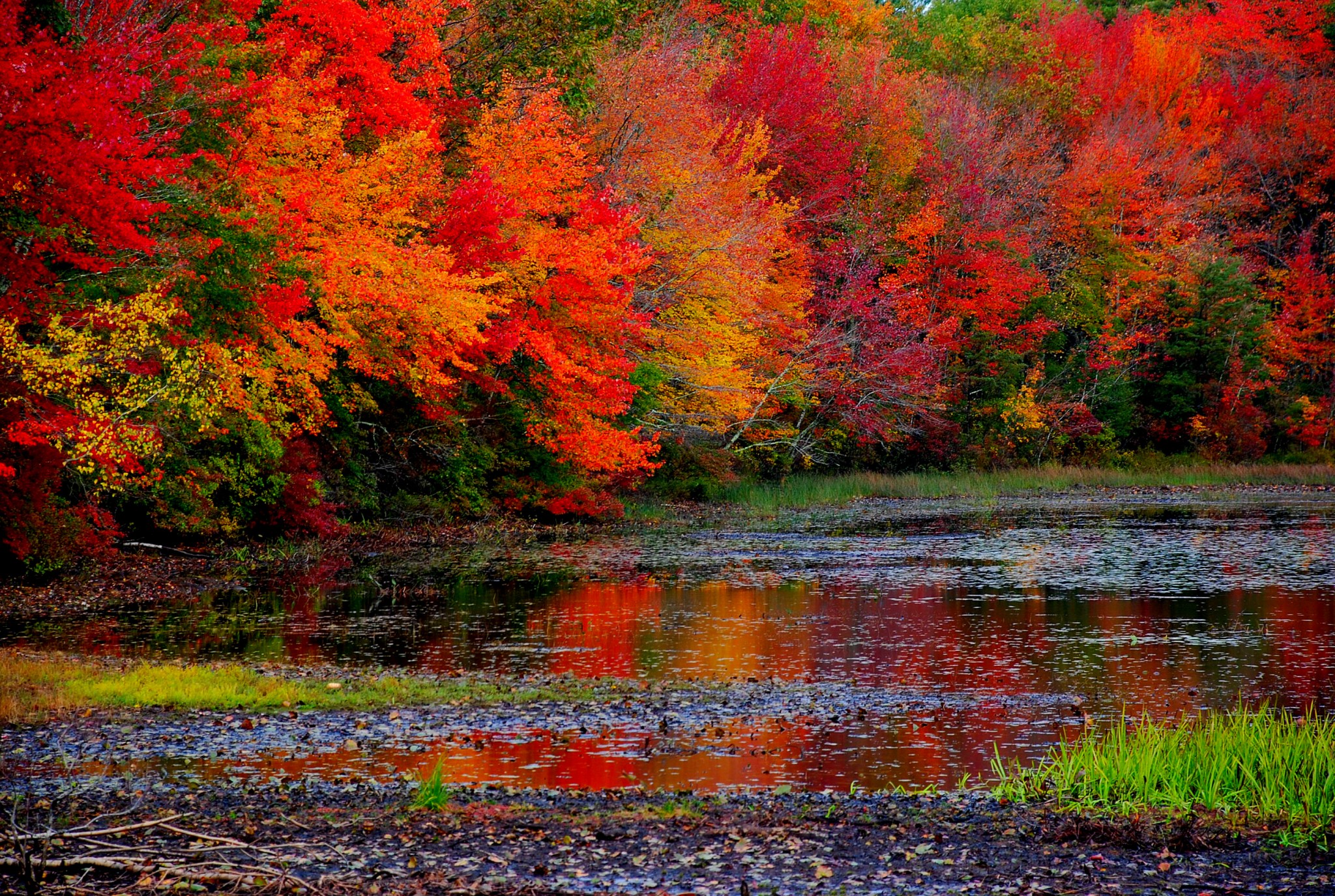 Welcome to the 2016 Road Trips with Tom fall foliage guide.  This post is designed as a planning aide for road-trippers who want to take a fall foliage adventure this year.  I’m not going to do the planning for you, but I’ll guide you to some helpful tools.

The first step, or course, is to decide where you want to go.  I’ll offer some guidelines and suggestions, but mainly I’ll give you links to internet resources.

I confess:  I’m a foliage junkie whose taken at least one fall color road trip every year for a long time.  I’ve also packed quite a few photos in this article.  These are some of my favorite photos, and I hope you enjoy them.  By the way, the photo above was taken near Hope Valley, Rhode Island, in October 2013.

If you put Google to work, you’ll find a plethora of web sites on foliage conditions in just about every state.  Unfortunately, most won’t be active until the season actually starts.  That’s not useful when you’re planning.

Here’s a very good resource that showed the progression of foliage displays in 2015.  It’s an interactive map.  Go to smokymountains.com/fall-foliage-map/  While conditions and timing can vary from year to year, this map appears to be generally reliable.

Simply slide the box horizontally along the date line; the map changes when you do.  Admittedly, this is an oversimplication, but it’s a pretty helpful guide.  You’ll notice that the first areas to hit peak are the high country of the Rockies, the Lake Superior area, and Upstate New York.  Of the major foliage areas, the last one to hit peak is the southern portion of Appalachia.

Nobody can accurately predict the exact fall foliage peak in a given area.  It varies from year to year.  But it always is affected by altitude and latitude.  If the foliage hasn’t peaked yet where you are, drive higher or farther north.  If it’s past peak, drive lower or farther south.

Our guide now examines five major foliage destinations with suggestions on where you can find beautiful foliage.  Please keep in mind these suggestions are based on my own experience.  I’ve been just about everywhere, but not everywhere.  Maybe you’ll make some discoveries that I don’t know about!

Here are the areas I’ll cover:

California isn’t generally considered from a nationwide perspective to have especially good fall color.  Don’t you believe that!  If you like golden aspens with a backdrop of spectacular mountains, head for the Eastern Sierra.  I’ll offer a few recommendations, but I suggest you check this blog as the season approaches:  www.californiafallcolor.com/

The Eastern Sierra is an easy day’s drive from the state’s major cities, and it’s under the radar as a foliage destination.   That means it’s not crowded, and lodging prices are some of the lowest of the year.  The leaves begin turning the last week of September and continue into early and mid-October.

Moving from south to north:

Be sure to bring your fishing gear and license, because the Eastern Sierra is renowned for trout fishing.

This is the home of North America’s best fall foliage.  The foliage there runs the full palette of yellow to gold to orange to bright red.  As a result, about a bazillion people from Boston and New York make a leaf-peeping pilgrimage every year.  Avoid the weekends!  Foliage begins in late September up near the Canadian border and continues to mid-October or later in southern Vermont, southern New Hampshire and western Massachusetts.

My strategy for visiting this area in fall is to book a room in White River Junction, Vermont, or Lebanon, New Hampshire.  These towns are on either side of the Connecticut River about midway to Canada from Massachusetts.  More importantly, they’re at the junction of Interstates 89 and 91.  Using the interstates, you can get to just about anywhere in Vermont or New Hampshire quickly.

Fall foliage is big business in these states.  All the New England states have detailed online reports that are updated weekly.  Once you’re there, you can select your actual routes.  One to keep in mind is Vermont SR 100, which runs from the Massachusetts border to Canada.  You’ll always find nice foliage displays somewhere along this highway.  The most popular foliage route in New Hampshire is SR 112 — the Kancamaugus Highway between North Conway and Lincoln — but I’d suggest you consider US 3 from Lancaster to the Canadian border.  Great color and hardly any traffic.

If you’re flying, I recommend Bradley Airport (Hartford-Springfield).  It’s right off I-91, and just over an hour’s drive from the Vermont border.

Don’t discount Canada.  The French-speaking province of Quebec offers excellent fall foliage in the area called l’Estrie, which is south and east of Montreal.  A good base is Sherbrooke.  Don’t forget your passport.

Here are a couple of online resources:  First, an interactive map — newengland.com/fall/foliage/peak-fall-foliage-map/  — and second, a blog:  www.jeff-foliage.com/

This is the destination for my annual foliage trip this year.  I’ll cover the high country from western Pennsylvania to northern Georgia.  The primary avenue for leaf-peepers is Skyline Drive in Virginia’s Shenandoah National Park, which leads to the Blue Ridge Parkway.  Shenandoah is nice, but it’s very close to Washington, D.C.; hence, it’s crowded on weekends.

Great Smoky Mountains National Park – America’s busiest park and always full of traffic – has renowned foliage displays, but too many people for my taste.  It’s the one place in Appalachia where room rates and crowds increase during foliage season.

As the season approaches, check the foliage reports from the states you plan to visit.  Google will show you where the sites are.

The Rockies are all about aspens.  The combination of golden aspen leaves and deep blue skies can be unforgettable.  Colorado draws the most visitors . . . and deservedly so.  Just about any major mountain road in the state will reward you with wonderful foliage.  But the Rockies are on an early schedule.  Peak displays are usually during the last week of September.

My favorite destination is the San Juan Mountains of southwest Colorado.  The loop out of Durango on US 550, SR 62, SR 145 and US 160 is my favorite foliage route in the western United States.  You’ll also find great fall color in Montana’s Glacier National Park; take the Going to the Sun Road, as well as short SR 49 along the eastern slope.  In Utah, a great short foliage road is the Alpine Loop out of Provo.

Let’s not forget the Canadian Rockies.  The Icefields Parkway that connects Lake Louise with Jasper National Park is one of the world’s most scenic highways, and you’ll find excellent fall foliage along this route in late September and early October.

Few people think of the Midwest as a place to view fall color, but there are some great places to visit.  The entire loop around Lake Superior – including Michigan’s Upper Peninsula, Wisconsin, northeast Minnesota, and Ontario – is pretty much one continuous foliage display in late September and early October.

I also like the area where Iowa and Wisconsin come together.  Peak is a bit later there.

Thanks for visiting Road Trips with Tom.  I hope you’ve found our fall foliage planning guide to be helpful.

This week’s road trip takes us to Fort Scott END_OF_DOCUMENT_TOKEN_TO_BE_REPLACED