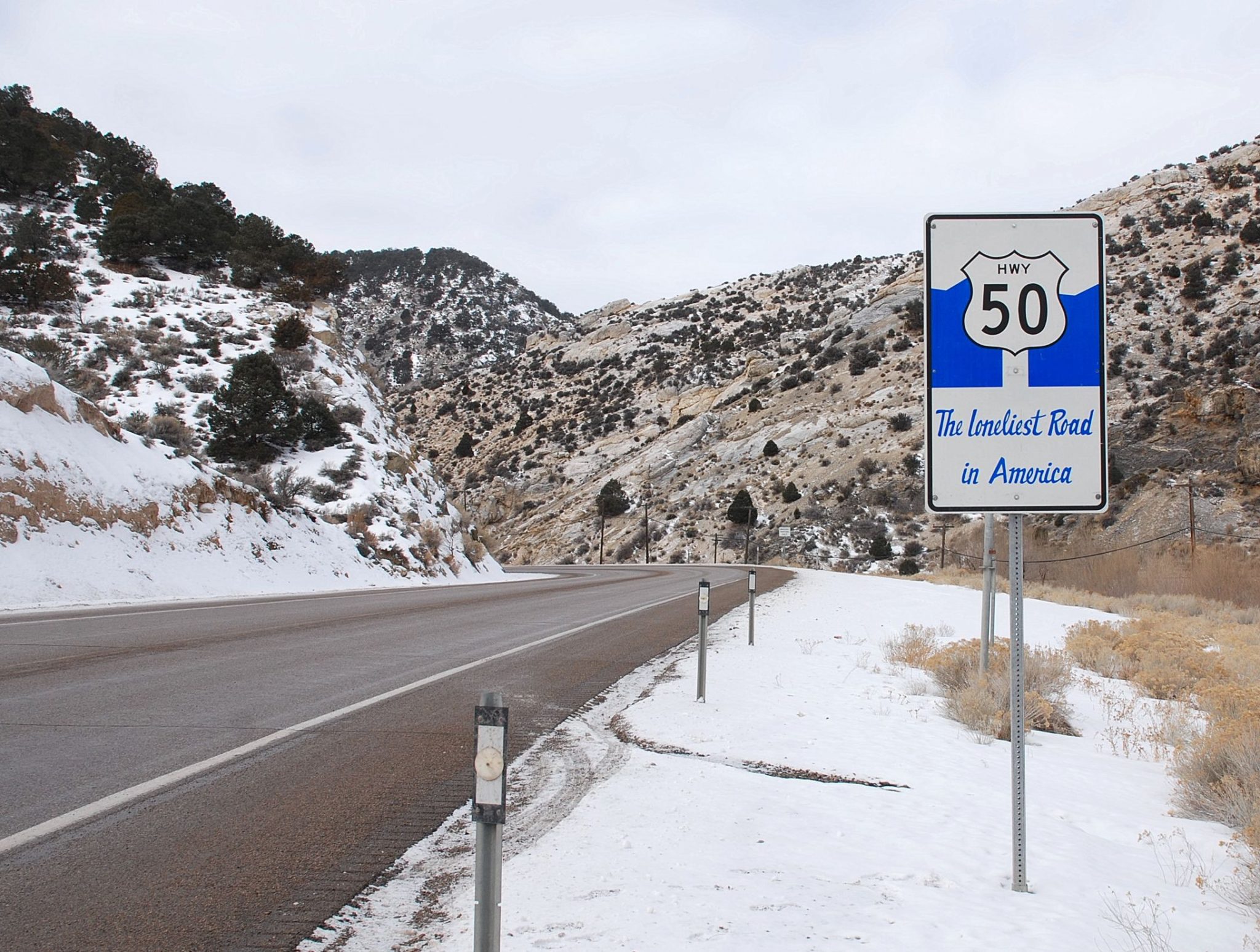 It could be argued that most people don’t enjoy driving.  What may have been a diversion for our parents or grandparents – or, admit it, you, too – is now a noxious chore, much of the time.  It’s gotten so bad that people have started longing for self-driving cars.

You’re no longer one of those whose hearts jump faster when you encounter what Bruce Springsteen called “ highways jammed with broken heroes on a last-chance power drive.”

But that can’t be true.  Otherwise, why would you be reading a blog about road trips?

Maybe you haven’t lost your soul to the 405, or whatever concrete devil torments you as an urban commuter.  Maybe you just need a change in context.   Podnuh, I’ve got just the thing for you. 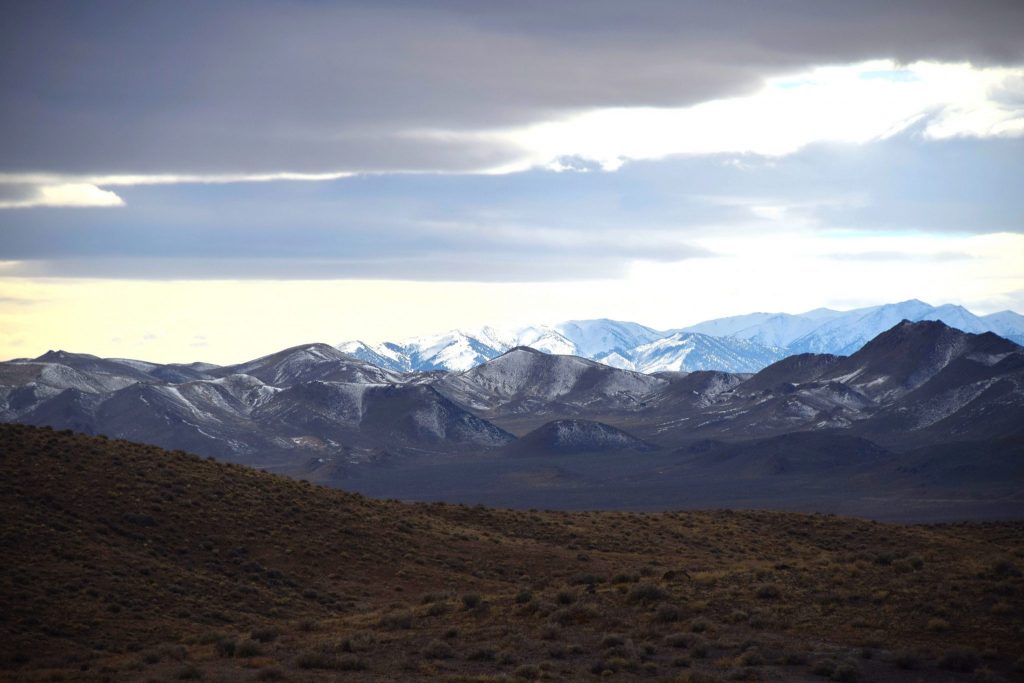 “An exhilarating expanse of nothingness”

Which brings us to our destination for the week – a roughly 320-mile-long section of US Highway 50 in Nevada that was immortalized by Life magazine in 1986 as “The Loneliest Road in America.”

Why is this highway special?  Alexander Nararyan, writing in Newsweek in 2015, called it “an exhilarating expanse of nothingness.”

If “nothingness” is an absence of people and other vehicles, then it’s as good a term as any.  But what about the imprint the land makes on you?  As you can see in the photo below, the scenery makes a strong imprint.  My car, Sam, and I had pulled over to the side of the road so I could use the restroom.  On this road, the “restroom” is pretty much anywhere you want it to be.

We’re in a typical valley in Central Nevada’s Great Basin Desert, where bazillions of square miles are arranged into parallel valleys and ranges trending north-south.    This is near the funky old silver mining camp of Austin, which, in Nevada, is about as central as you can get.

Not a road trip for everyone

The valley bottom is covered with sagebrush.  Elevation is about 6,000 feet.  The sky is deep blue.  The sky is almost always deep blue here.  The Toiyabe Range in the background is snow-covered; the photo was from early March.  The dark horizontal strip running along the base of the mountains is a mixed forest of juniper and pinion pine.  What you don’t see in the photo or in a photo looking in either direction on US 50 are any vehicles or people.

This isn’t a road trip for just anyone, especially a solo road-tripper.  In all likelihood, your cell phone won’t work out here.  Forget finding radio stations.  For most people, the loudest noises will be those taking place inside your head.  Nararyan called US 50 “a meditation chamber with a speed limit.”

But it also ain’t the end of the world.  There is an infrastructure if you need one.  You just can’t see it most of the time.  The highway patrol and county sheriffs do patrol the road.  Take some of the same precautions you would take on any road trip:  Have your vehicle in good condition.  Carry some extra water.  Have an actual spare tire – not a can of whatever-they-call-it.

It’s pretty easy to give you a mileage log of US 50, because there are only three towns and a couple of junctions.  The tricky part is to define what IS the loneliest highway.  My definition states it’s the portion with the least traffic.

For our purpose, the Loneliest Road in America runs from Fallon to the Utah border.  Fallon (pop. 9,000) is about an hour east of Reno.  This is the extent of water draining the eastern slope of the Sierra Nevada.  Like most Nevada towns, Fallon exists to take things out of the earth, but it’s one of the state’s few substantial farm towns.  Its other claim to fame is its location of the U.S. Navy Top Gun training school for future Mavericks.

Mile 0.0.  Reset your trip odometer at the intersection of Williams and Maine in downtown Fallon.  This is where US 95 heads northward to I-80, Winnemucca and points north.

Mile 46.9.  Junction with SR 361 to the mining town of Gabbs.  This road eventually reaches US 95 at Luning.  On your right is the former Middlegate Pony Express Station.  The property has remained active.  Here, you’ll find gas pumps, a few motel rooms, a café and a saloon.  It may be a dump, but it’s the best for miles around.  Welcome to Nevada.

Austin has lots of stories

Mile 109.2.  Junction with SR 305 heading north to Battle Mountain.  Near the junction is a US Forest Service campground.  The road climbs into the steep canyon that shelters Austin.  Silver was discovered here in 1862 when a Pony Express horse kicked over a rock.  Within a year, there were 10,000 people in the canyon.  Today’s population is less than 200.  Austin has lots of funky stories to tell, but I’ll let you Google for them.

In Austin you’ll find a Chevron gas station/convenience store, a couple of motels neither you nor I would stay in, and two cafes; the locals recommend the Toyaibe.

The only steep, twisting section of US 50 is where it climbs out of the canyon just beyond Austin.  After crossing a 7,4o0-foot summit, the highway sweeps down into Big Smoky Valley – a 100-mile-long valley extending almost to Tonopah.

Mile 136.1.  Hickison Petroglyph Site on the left has a campground, outhouse and interpretive trail.

Mile 176.2.  Junction with SR 278, which connects Eureka with Elko on I-80.  Look left at the junction, and you’ll see several large farms and ranches.  Some are owned by the descendants of Mennonite settlers.  Eureka is two miles ahead, tucked into a tidy little canyon.

Eureka is Nevada’s nicest small town, with decent visitor facilities and some beautiful structures, including the Opera House, built in 1880, and the Jackson House Hotel, built in 1877.  Eureka is about three times the size of Austin.  Like Austin, it began as a silver camp, but lead mining has kept it alive over the years.  Eureka calls itself “the friendliest town on the loneliest road.”

Mile 255.8.  Welcome to Ely and the first traffic signal since Fallon.  Between Eureka and Ely, there are a couple of summits and long grades, but no habitations and no major junctions.  Ely has all traveler services – even a pair of legal whorehouses.  Make hotel reservations if you want to spend the night:  You’re a long way from anywhere else if the town’s rooms are full.  Before leaving town, be sure to check out the excellent Northern Nevada Railway Museum.

Ely is Nevada’s biggest copper mining town, and the mines are still active.  The giant open pit mine is west of town in Ruth.

A mile beyond that first signal, US 50 makes a right turn, gathers up US 93 southbound and US 6 coming in from Tonopah, and the three highways share guardrails for 29 miles into the Snake Valley.

Mile 285.0.  Junction with US 93 south to Las Vegas.  US 6 and 50 run together from here into Utah.  From the junction, you face spectacular Wheeler Peak, highest mountain wholly with Nevada and centerpiece of Great Basin National Park.  Major’s Place, on your right, used to be an important traveler stop.  Its name is still on the state map, but it’s just a bar.

Mile 314.7.  Junction with SR 347, leading to the tiny town of Baker and the entrance road for Great Basin National Park.

Mile 321.7.  Nevada-Utah state line.  Right on the line is a unique business called The Border – gas station, motel, restaurant and casino.  I’ve stayed here; it’s the best place to stay if you’re visiting Great Basin National Park.  Interestingly, the motel rooms are in Utah, but the store, café and casino are in Nevada.

The Utah border doesn’t bring an onslaught of traffic.  The next town, Delta, is another 90 miles to the east.

On the average, I passed another vehicle every 10 miles or so.  Does this verify that US 50 is still the loneliest road in America?   Maybe it’s Nevada’s nature to have several paved highways connecting dots on a map that aren’t much more than dots on the landscape.

Or just maybe, the loneliest road isn’t in Nevada at all.  On my visit, after a quick stop at Great Basin National Park, I continued southeast into Utah on SR 21.  The first town, Milford, was 88 miles from Baker and 77 from the state line.  In that distance, I passed exactly zero other vehicles.  Nada.

Thanks for spending some time here at Road Trips with Tom.  Please join us again Sunday, March 26, for another road trip destination.

This week’s road trip takes us to Fort Scott END_OF_DOCUMENT_TOKEN_TO_BE_REPLACED