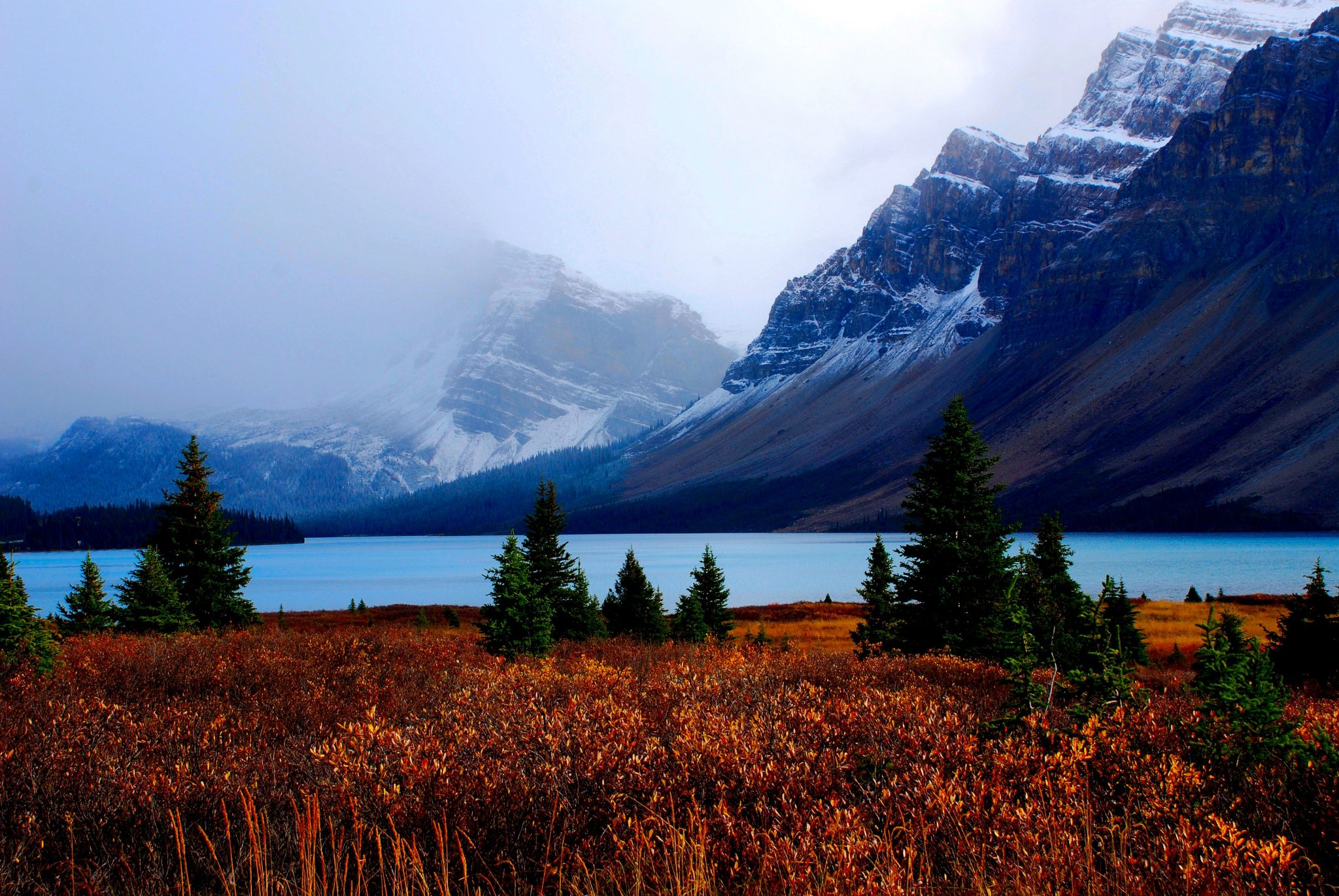 This week Road Trips with Tom takes you to the heart of the Canadian Rockies for a once-in-a-lifetime cruise on the Icefields Parkway.  I’ve probably driven more North American highways than just about anyone, and I’d vote for the Icefields Parkway as the continent’s most scenic drive.

If you put this road trip at the top of your bucket list, you’ll thank me.

When this blog launched two years ago, we ran a series on North America’s 25 most scenic highways.  The series presented brief sketches on each in a group of five.  This week’s post is the second providing more detailed guidance for a single route, including original photography.  The first was our visit to South Dakota’s Peter Norbeck Scenic Byway, which was published February 19.

A lot of people think the Canadian Rockies are what mountains should look like —   jagged peaks, icefields, dense forests, plentiful wildlife and lakes colored turquoise by glacial snowmelt.  Even if you’ve never been there, you’ve seen the images on postcards and calendars.  Pick your favorite adjectives – awesome, spectacular, unforgettable – they all apply.

Today’s road trip takes you to where those images were taken – a 142-mile highway connecting Banff and Jasper National Parks in Alberta.  So buckle up, jump-start Old Betsy (or your favorite airline), and grab your camera.

Three factors combine to make this one of the most memorable drives on the planet:  One, of course, is the scenery.  The other two are the alignment and the highway itself.

The Canadian Rockies continue northward into British Columbia, but the Alberta portion where we’re headed is a single backslash-shaped range.  Only three highways cross it.  The Icefields Parkway, which connects the Trans Canada and Yellowhead Highways, doesn’t.  Instead, it follows an alignment within the range, staying just a few miles east of the continental divide the entire route.  The headwaters of the Saskatchewan and Athabasca Rivers are next to the highway.

As a result, you have 142 miles of nonstop WOW.  The scenery starts out gorgeous and stays that way.

This enabled highway builders to create a route that’s mostly gentle and relatively level.  There’s only one small section that’s narrow and twisting.  Otherwise, the highway is a mix of straightaways and sweeping curves.  You don’t have to poke along at 30 mph and will have ample opportunities to pass RVs and tour buses plodding along in front of you.  Elevations average about 5,000 feet.

Shoulders are wide, so you can safely pull off the roadway whenever a photo op strikes you.  This, combined with the gentle grades and absence of commercial traffic, makes the Icefields Parkway one of the best bicycle routes on the planet.  There are also plenty of pullouts, many with restrooms and interpretive displays.

The road is kept open all year, although heavy snowfalls and avalanche risk cause occasional closures.

The parkway runs from Lake Louise in Banff National Park north to Jasper.  Driving time is about 3 ½ hours, but you should allow a full day.  Better yet, spend the night at the end of the road, then turn around and drive it again in the other direction.  The view changes with every nuance of the light and clouds, so you won’t be seeing the same things twice.  It also gives you plenty of time to hike some of te trails.

Lake Louise is on the Trans Canada Highway about two hours west of Calgary and 30 minutes from Banff.  The only major cities within a day’s drive are Calgary, Edmonton, Vancouver and Seattle.  Except for Calgary, which is about two hours east,  it’s a very long day’s drive.  Most visitors fly to Calgary, then rent a vehicle.

On my last visit, I flew to Seattle and took two days in each direction to get to the Canadian Rockies.  That worked out very well, because it’s scenic the entire distance.

Straddling major highways is just one way Canadian national parks differ from those in the United States.  Another is having towns with full-time residents.  Banff and Jasper are small cities entirely given over to tourism, but they enable you to stay in the parks without staying in rustic, expensive lodges.  These are just expensive.  They also have a full range of visitor facilities.

Between them, however, facilities along the parkway are limited.  The only gas station is at Saskatchewan River Crossing, about one-third of the way from Lake Louise to Jasper.  You’ll also find motel units, a café and a gift shop selling “Canadian” souvenirs; this is where you can find a “Mountie” bobblehead that was made in China. The Columbia Icefield Discovery Centre, about two-thirds of the way, has food service.

Banff and Jasper are Canada’s two most popular national parks, drawing visitors from around the world.  You’ll meet as many Asians and Europeans here as Canadians.  Banff has to be the only North American town of 4,000 people with two Korean restaurants!

It gets very crowded here, especially in July and August.  The parks’ proximity to Calgary (population over one million) means visitation spikes on weekends.  In three visits to the Canadian Rockies, I’ve had the best luck coming between mid-September and mid-October.  Fall foliage is a nice bonus.

Lodging here will put a dent in your credit card.  Accommodations start at expensive and go up from there.  Way up.  But if there’s anyplace worthy of a splurge, this is it.

Campgrounds and hostels are abundant along the Icefields Parkway, but crowding is an issue in summer.

Here’s a brief guide showing major destinations along the way.  It starts at Lake Louise and ends at the Jasper townsite.  Distances in Canada are metric.  I’ve provided them in both miles and kilometers.  I took them from another source, so consider them approximate.

Mile/km 0.  Exit for Lake Louise village.  This isn’t a “town” like Banff, but rather a collection of tourist businesses.  From the exit, follow the signs to Lake Louise.  You’ll immediately come to the junction for Moraine Lake.  Don’t miss this!

Mile 0.3/km 0.5.  Exit for the Icefields Parkway, which is signed Alberta PR 93.  Just beyond the junction is the toll booth where you pay your entrance fee.  Great news.  This year marks Canada’s 150th birthday, and park entrance is free!

Mile 23.3/km 37.5.  The road runs along spectacular Bow Lake, with Crowfoot Glacier on the opposite shore.  Bow Lake is the featured image at the top of this post.

Mile 25.9/km 39.7.  Summit of Bow Pass.  From here, a short trail leads to a viewpoint from which you look down at turquoise Peyto Lake – most photographed lake in the Canadian Rockies.

Mile 47.3/km 76.0.  Saskatchewan River Crossing:  Gas, lodging, food service, store.  Junction with Alberta Highway 11, which heads east to Red Deer.  This is the only major road junction on the parkway.

Mile 65.9/km 106.1.  Sunwapta Pass, which is the boundary between Banff and Jasper National Parks.  Water north of the pass flows to the Arctic Ocean.  South of the pass, water reaches Hudson Bay.  The pass is short, but steep and winding.

Mile 78.2/km.  The Columbia Icefield.  At 125 square miles, this is the largest icefield south of the Arctic Circle.  Most of it is out of sight, but the massive Columbia Glacier is easily accessible.  This is where you can take a 90-minute tour on a bus with special tires that let you travel on the glacier.  Tours begin at the Columbia Icefield Discovery Centre – an imposing stone facility with interpretive displays and food service; it’s open early May-mid-October.  At $80 per person, the tours are way overpriced, but it’s your money, podnuh.  From the end of the side road, you can walk up to the edge of the glacier for free.

Mile 108.2/km 169.1.  Athabasca Falls on the left.  Here, the Athabasca River makes a sharp turn and thunders through a gorge flanked by heavily jointed stone.  Trails lead to overlooks.

Mile 141.5/km 227.5.  End of Icefields Parkway at the junction with the Yellowhead Highway (Alberta 16).  The Jasper townsite is just a few klicks to the right.

Thanks for spending some time with Road Trips with Tom.  Please join me again on Sunday, April 2, as we visit Arizona to get our kicks on Route 66.

This week’s road trip takes us to Fort Scott END_OF_DOCUMENT_TOKEN_TO_BE_REPLACED