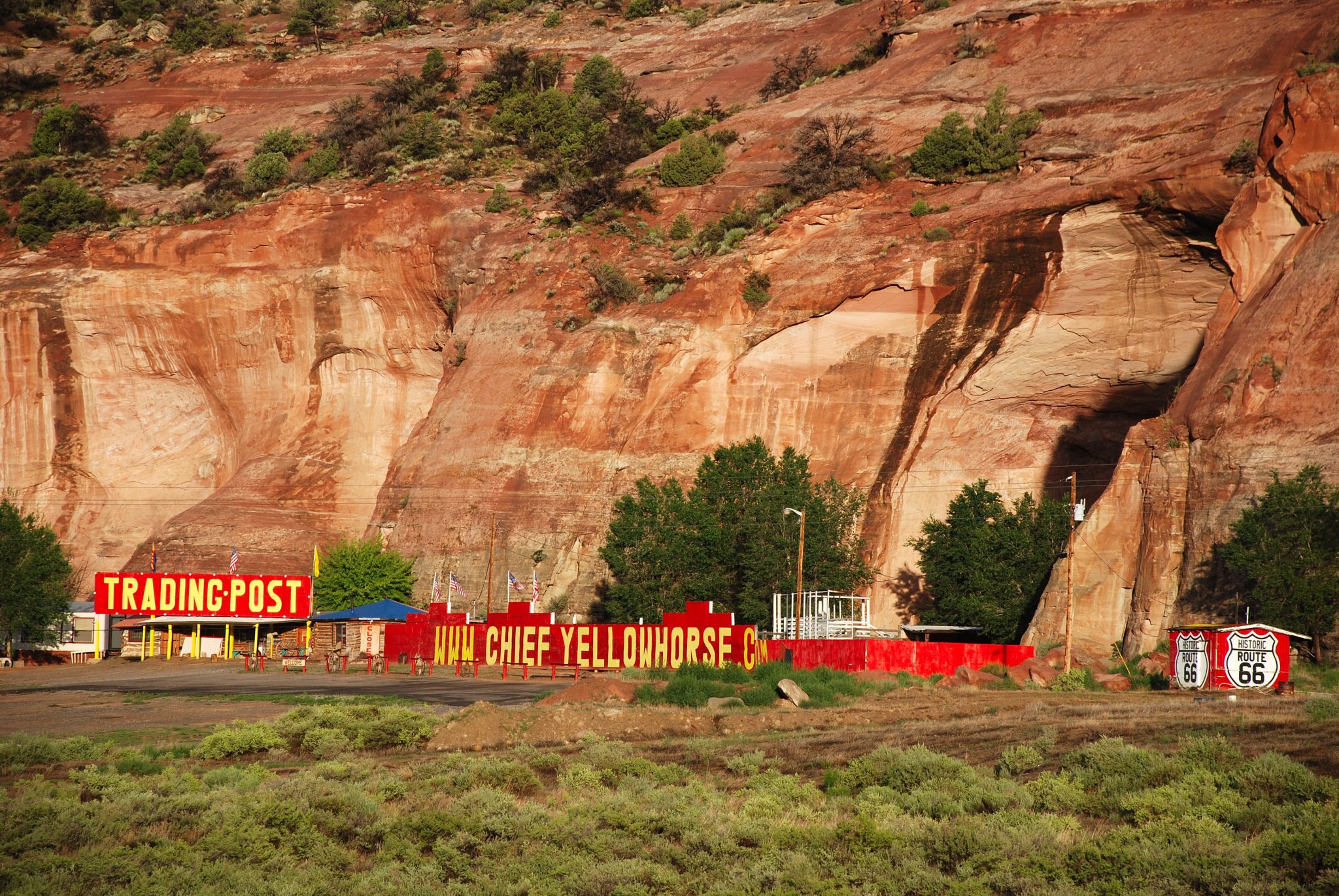 This week Road Trips with Tom focuses on a remarkable pop culture icon – the legendary Route 66.

This song written by Bobby Troup was a hit for Nat King Cole and covered by such artists as the Rolling Stones and the late Chuck Berry.  The song, along with a classic John Steinbeck novel and a TV series, helped propel a ribbon of asphalt into a cult status that continues to grow.  This is despite the fact that Route 66 hasn’t existed for over 30 years.

We’ll look at how this happened and take a road trip along Route 66’s Arizona portion.

We’ll definitely hit Flagstaff and Kingman, and we’ll pay homage to Winona, which is now not much more than an I-40 onramp.

The highway that wouldn’t die

The story goes back to the 1920s.  At that time, Detroit was gearing up for auto production in a big way.  The federal government recognized the country needed an organized system of highways so people could safely and dependably get where they wanted to go.  It devised a system of numbered routes – even numbers for east-west roads, increasing in number from north to south.  The north-south routes were odd-numbered and increased in number from east to west.

Most of these numbered federal routes still exist.  US 101 and 395 in California are examples.  Later, when the Eisenhower administration initiated the interstate highway system, some of the old federal routes became redundant and were decommissioned.  That was the fate in 1985 of US 66, which ran from downtown Chicago to Santa Monica.  It was supplanted by Interstates 55, 44, 40, 15 and 10.  The US 66 signs were removed.  End of story, right?  Not hardly.

By that time, Route 66 had become too big a part of the national consciousness to disappear.

Its elevation to cult status was a result of function, media and marketing.  Functionally, Route 66 was the most prominent westward route for people escaping the Dust Bowl recession in the 1930s.  It was also a primary route for trucks, thanks to the relatively flat terrain it crossed.  During World War II, it saw more migration thanks to the war-related industries in Southern California.  And in the 1950s, it lured thousands of vacationers to the Grand Canyon and the west coast.

In 1939, Steinbeck’s classic The Grapes of Wrath chronicled the Joad family’s migration to California.  I’ll bet you read this book either in high school or college – am I right?  Steinbeck referred to Route 66 as “The Mother Road.”

Next came the Bobby Troup song, followed in the 1960s by a popular TV series starring George Maharis and Martin Milner.

Adding to the road’s media fame was marketing by the people who established businesses to serve travelers along the way.

Let’s take a road trip across Arizona.  Coming from California, take Exit 1, then follow the signs to Oatman.  We featured Oatman in Road Trips with Tom in a post dated January 31, 2016.  It’s an old mining town that’s reinvented itself as a tourist stop on old Route 66.  What really saved Oatman after Route 66 was bypassed in favor of I-40 was its popularity among Laughlin casinos as an excursion destination.  With its junky souvenir shops, mock gunfights and burros wandering the streets, Oatman is super-tacky, but people love it.

Beyond Oatman, old Route 66 twists and turns its way through the Black Mountains, then drops to the desert floor and Kingman.  It serves as the Interstate 40 business route through Kingman, then sets off on its own route for 70-some miles to Ash Fork.  It’s signed SR 66 and maintained by the State of Arizona.  Mostly tourist traffic and local traffic on the Hualapai Indian Reservation use it.

Our next stop is Seligman, located close to where SR 66 joins with I-40.  For years, it made a living off Route 66 traffic.  But almost immediately after I-40 was completed, that traffic disappeared.  Facing a slow spiral into oblivion, the locals decided to pursue an all-out promotion of the old road’s cultural revival.

In Williams, Flagstaff, Winslow and Holbrook, Old 66 serves as the main drag.  Motor down Santa Fe Ave. in Flagstaff, and you’ll see evidence that this was the single most popular overnight stop on the old road.  A few miles east of Flagstaff is Winona, now mostly a memory.  In Winslow, there’s an added attraction from the famous line in an Eagles song, “Standin’ on a corner in Winslow, Arizona.”

Route 66 nostalgia shows no sign of waning.  There are multiple Route 66 associations and museums, and sales of Route 66 souvenirs runs into the gazillions.  Most of it is absolute junk, but that doesn’t include my genuine Route 66 table lamp (wink, wink).

Thanks for joining Road Trips with Tom.  Please come back on Sunday, April 9, for our next destination.

Welcome to Benefit Street – the most impressive neighborhood of END_OF_DOCUMENT_TOKEN_TO_BE_REPLACED

This week, Road Trips with Tom steams down the mighty END_OF_DOCUMENT_TOKEN_TO_BE_REPLACED