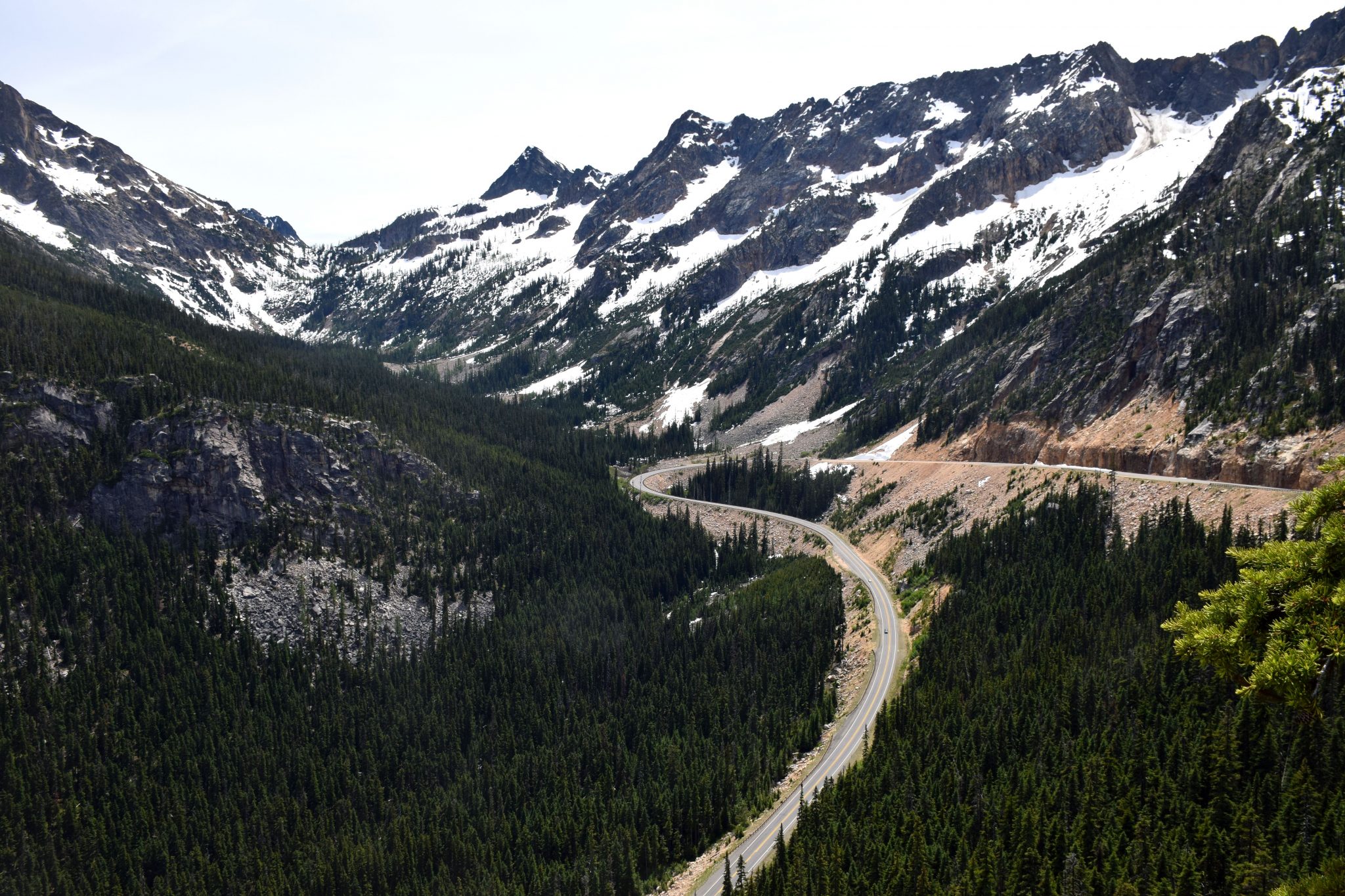 This week Road Trips with Tom heads back to the mountains – to Washington’s spectacular North Cascades Highway.  This is arguably one of the country’s half dozen or so most scenic mountain drives.

You like jagged peaks?  It’s got ‘em.  Glistening glaciers?  Got ‘em.  Rushing rivers?  Got those, too.  Lush evergreen forests?  Check.  Sunshine every day?  Well, umm, you can’t have everything.

When most of us out-of-staters think of the Cascades, we picture a row of stately, solitary volcanoes extending from Mt. Lassen in California to Mt. Rainier southeast of Seattle.  That pattern changes in a big way up here near the Canadian border.  At their north end, the Cascades are a sea of peaks that don’t look like volcanoes, with their serrated summits pushing skyward.  North Cascades National Park is one of the greatest, most extensive areas of wilderness in the Lower 48.

The North Cascades Highway will take you from the lowlands around Puget Sound up into and over the mountains, depositing you in the semi-desert along the Columbia River not far from Grand Coulee Dam.  The highway is a well-engineered two-lane road with no scary sections.  It’s easy to drive, no matter your vehicle of choice.  Figure on half a day from end to end at a leisurely pace.

There are crazy people (i.e., me) who’ve made this a one-day loop out of Seattle, but a weekend is ideal.  It can be combined with a visit to Coulee Dam, the apple country around Wenatchee or the way-over-the-top Bavarian village of Leavenworth.  US 2 will return you from Wenatchee over scenic Stevens Pass to Everett, just north of Seattle.  I should also mention here that the North Cascades Highway is seasonal; it’s typically open from early May to early November.

In this post, we’ll assume you’ll be driving west to east from I-5 into the North Cascades.  We’ll provide a very general mileage guide to make it easier.

Sedro Wooley — a bridge too far?

Begin by exiting I-5 onto eastbound State Route 20.  It’s a good idea to have a full tank of gas before setting off into the mountains.

In 6 miles you arrive in the town of Sedro Wooley.  Reset your odometer at the junction with SR 9.  If you’re wondering how a town got a silly-sounding name like Sedro Wooley, I did, too, so I looked it up.  Seems like there were towns named Sedro and Wooley on opposite banks of the Skagit River.  Apparently, someone built a bridge, and the towns amalgamated.

You may not have heard of the Skagit River, but it drains an area full of icefields.  It’s a big river.  You’ll be following it for the next 70 miles or so, and you’ll find it an amiable traveling companion.  Placid pools of deep green water alternate with swiftly flowing sections with big rocks.  Both sometimes offer tantalizing glimpses of the snow-covered high country where you’re headed.

Mile 40.4.  Village of Marblemount and junction with the  Cascade River Road, which leads to a popular wilderness trailhead.  Turn left to stay on SR 20.  A side road leads left to the North Cascades National Park Wilderness Information Center, where you’ll need to stop to get a permit for backcountry hiking.  In Marblemount you’ll find a lodge, store and gas station (last gas for 70-plus miles).

Mile 46.1.  Entrance sign for North Cascades National Park.  The park is actually a confusing complex of three National Park Service units.  The national park maintains an above-average website with details on facilities, hours, regulations, camping, ranger programs and other types of recreation.  Go to www.nps.gov/noca.  I suggest you spend some quality time there before setting off on your North Cascades visit.  By the way, there’s no entry fee for this park.

Where Seattle’s power comes from

Mile 54.0.  A side road on the right leads to the North Cascades National Park Visitor Center.  The displays are so-so, but the free video has some awesome visuals.  A short trail leads from the facility’s back door to a viewpoint overlooking a small glacier.  Nearby is one of the park’s largest campgrounds.  Campsites are first-come, first-served and fill up early in summer and on weekends.

Mile 54.5.  Village of Newhalem on the right.  This is a company town owned by Seattle City Light, which operates major hydroelectric facilities nearby.  The village has a store.  Seattle City Light operates boat and powerhouse tours; go to www.seattle.gov/light/damtours/skagit for detailsl.

There are three lakes in the area – Gorge, Diablo and Ross.

Mile 57.5.  Turnout with view of 369-foot-high Diablo Dam.  There are other viewpoints in this section of  the highway.

Mile 96.5.    Washington Pass.  This is the highway’s scenic highlight.  Take the short side road on the left.  It leads to a rest area and a trail to a spectacular overlook.  In front of you is a wall of peaks, including Liberty Bell Mountain.  Way down below, the highway makes a sharp bend, then begins descending down a U-shaped glacial valley.

East of the pass, the highway enters the “rain shadow” of the North Cascades.  The vegetation gets sparser and drier.  Douglas fir forest is replaced by scattered ponderosa pines.  Cattle pastures appear alongside the highway.

Mile 113.7.  Turnoff to Mazama, where you’ll find a store and gas station.

That’s it for this week’s post.  Thanks for spending time with Road Trips with Tom.  Please join us again on Sunday, April 16, for another road trip destination.

This week’s road trip takes us to Fort Scott END_OF_DOCUMENT_TOKEN_TO_BE_REPLACED

You can run out of adjectives really fast when describing END_OF_DOCUMENT_TOKEN_TO_BE_REPLACED