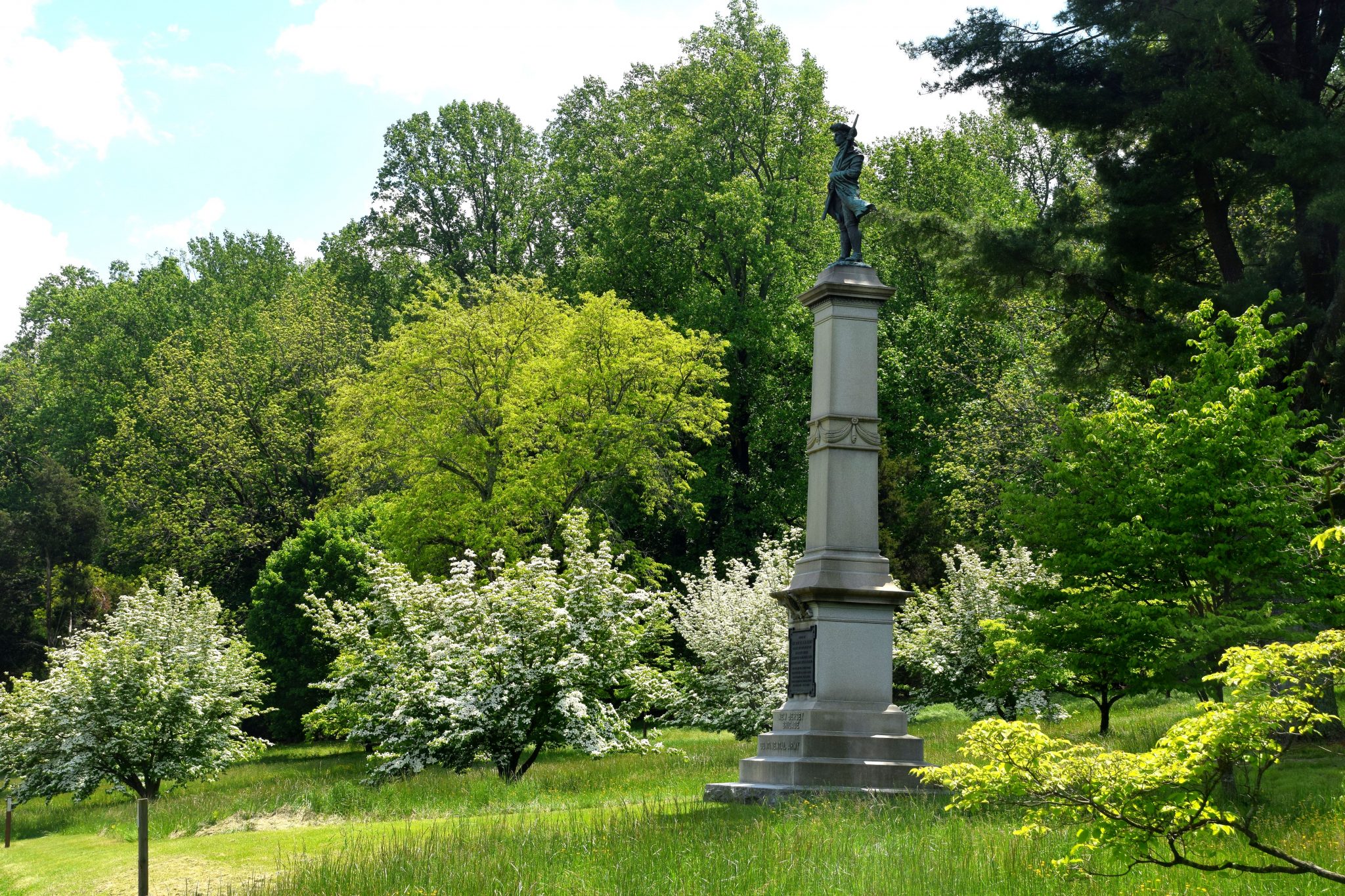 Valley Forge is the first of 10 East Coast destinations Road Trips with Tom will be visiting during the next few months.  Among the special places I visited on my Philadelphia-based road trip in May, I decided I’d begin with the place I enjoyed the most.

Valley Forge National Historic Park is a special place for several reasons.  The most obvious is what you see and how you feel when you’re here.  But we have to start with its history, because that’s why this lovely park isn’t just another patch of condos, malls and high-end office campuses in suburban King of Prussia, Pa.

Valley Forge is a key part of the Revolutionary War legend, but it wasn’t a battlefield.  No one died here from an artillery bombardment or bayonet charge.  However, out of 12,000 hungry, ill-equipped, untrained, and undisciplined colonials who limped into this area in December 1777, an estimated 2,500 died from disease, illness or exposure.

It all started the previous August, when British Commander Lord Howe landed at Elkton, Maryland, and headed toward Philadelphia, the colonial capital .  George Washington moved his Grand Army in place at Brandywine Creek for a defense, but the good guys were outnumbered, outflanked and a bit outgeneralled that day. The guys in red occupied Philadelphia, and the Continental Congress fled. (History doesn’t tell us if Lord Howe preferred Pat’s cheesesteaks or Geno’s.)

By then the war season was winding to a close, and Washington had to lick his wounds and survive the winter in order to continue.  Washington had three main problems:  First was the supply issue.  Clothing, shoes, blankets – all were in terribly short supply.  Second, winter was approaching.  And third, training.  The army had been hastily assembled and lacked military discipline and knowhow.

Washington selected Valley Forge, 18 miles north of Philadelphia as his army’s winter home.  It was far enough to halt any threat of surprise British attacks, yet close enough to keep an eye on their red-jacketed foes. The forests along the Schuylkill River provided wood for huts.  But what about supplies?  Washington did not have the authority to address the problems.  He had to petition 13 separate states for help.  It took weeks to provide such simple necessities as shoes to the troops.

Training was provided by a Prussian officer named Baron Friedrich von Steuben, who arrived with a letter of introduction from Benjamin Franklin.  Washington immediately assigned him the task of training the troops.  Von Steuben was hugely successful and Washington’s ragtag group was transformed into a U.S. Army capable of winning a war.

Here’s an excellent quote from the park brochure:  On June 19, 1788, after a six-month encampment, this same army that had struggled so mightily emerged to pursue and successfully engage the British Army at the Battle of Monmouth in New Jersey,  The ordered ranks, martial appearance, revived spirit and fighting skill of the American soldiers spoke of a great transformation having occurred amid the cold, sickness and hardship that was Valley Forge.

Okay, let’s fast forward to your next visit to Valley Forge National Historic Park.
The park, as you can see, is gorgeous.  The photos in this post were taken May 14-15, but I believe you can have a great visit in any season.  Fall would certainly be special.

Annual visitation is 2.4 million.  A lot of that involves locals who use the park for cycling, jogging and walking.  Visitation is highest on weekends and in summer.  On a nice Sunday in spring, there were lots of visitors, but I was always able to find parking at points of interest.

The park is located in suburban King of Prussia.  It’s easily accessed from I-76, I-476, US 202 or US 422.  If you use any of these approach routes, you’ll encounter directional signs.

Your first stop should be the visitor center, open 9-5 daily.  Be  sure to watch the video presentation and browse the exhibits.  It’s  bit of a walk from the parking area to the visitor center.  The complex includes a bookstore offering light snacks and refreshments.  For more information, including hours for other attractions, go to the park’s website – www.nps.gov/vafo.  By the way, the park video (and many others) are on YouTube – see below.

For me, the highlight of the park is the 10-mile Encampment Tour – a paved road, mostly one-way, that meanders through the countryside and connects various points of interest.  The Park Service estimates it will take between 20 minutes and two hours to complete the loop.  Realistically, expect to spend at least 90 minutes on the drive, plus extra time for stops at Muhlenburg Barracks, the National Memorial Arch and Washington’s Headquarters.  I drove it twice – once on Sunday and again on Monday, when the park was much less crowded.

Take your time.  Stop to take in the view and the fresh air.  Enjoy.  You’re going to like this place!

The park grounds are open from 7 a.m. to sunset daily.  If you’d like a cell phone tour or a guided bus tour, ask at the visitor center.

Thanks for joining me at Road Trips with Tom.  I hope you’ll come back on Sunday, June 4, as we visit the Baseball Hall of Fame in Cooperstown, N.Y.

This week’s road trip takes us to Fort Scott END_OF_DOCUMENT_TOKEN_TO_BE_REPLACED