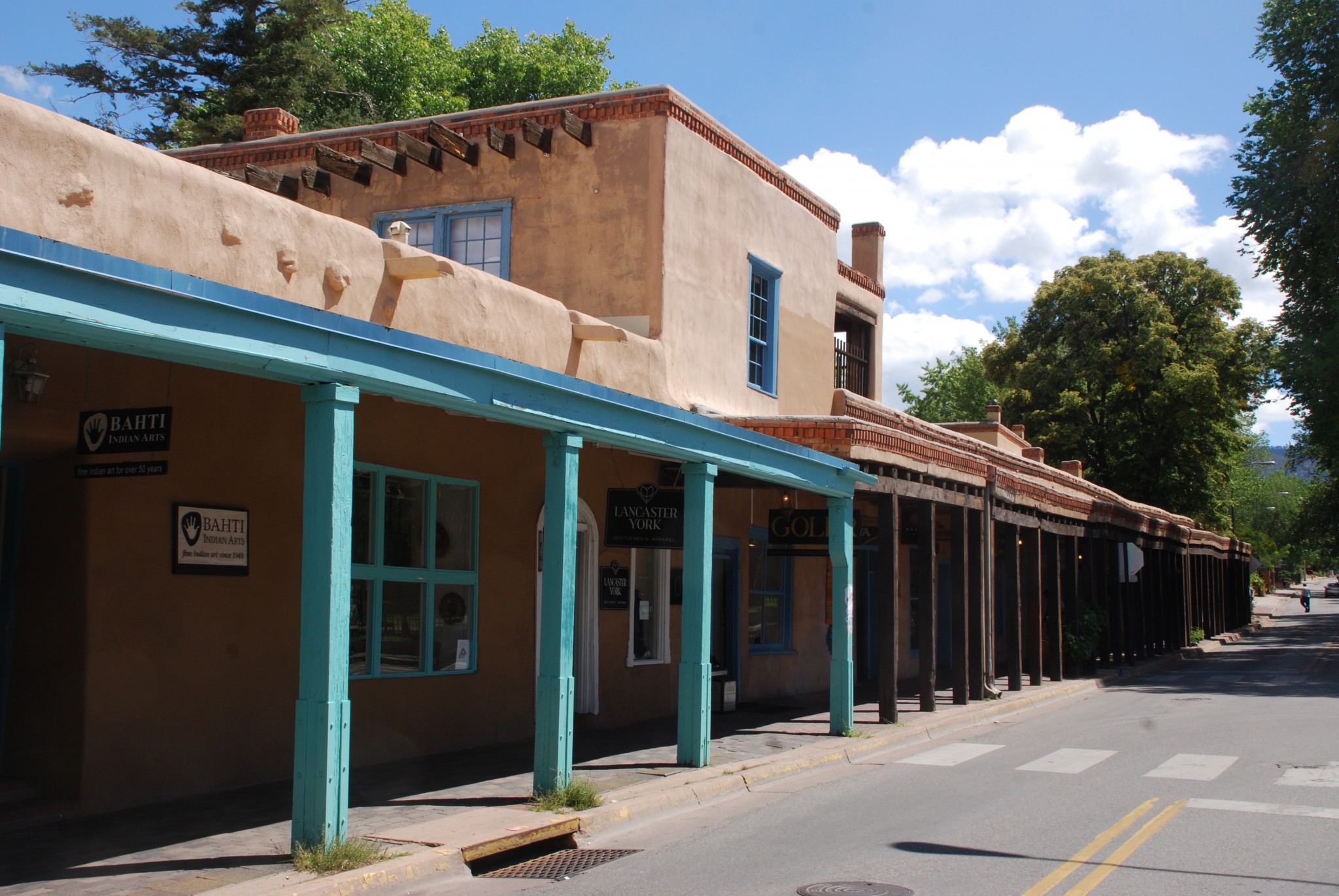 Everyone needs to visit Santa Fe at least once.  Actually, make that twice:  There are too many great shops, wonderful art galleries and fantastic restaurants to experience in a single visit.

Santa Fe is worthy of being a road trip destination, no matter where you live.  No other city looks like it No other U.S. city can match Santa Fe for ambience, history, art, culture, architecture, shopping and food.  Ah, the food!

Santa Fe is old.  In fact, it was founded by the Spanish a decade before the Pilgrims landed on Plymouth Rock.  But the site is even older than that, having been used since the 11th century by native people, who built a village near the site of today’s Santa Fe Plaza.  Santa Fe became the capital of New Spain and later of the Mexican territory of Santa Fe after independence from Spain in the 1820s.  It’s still New Mexico’s capital, making it North America’s oldest capital city.

Under U.S. rule, Santa Fe was the end of the famed Santa Fe Trail and seemed destined to be the dominant city of the Southwest.  That ended, however, when the railroad named after the city bypassed it en route to Albuquerque.  When the economy went into decline in the early 20th century, city fathers recognized the value of its architecture and native arts, and foresaw the attraction for visitors that drives it today.  In 1912 they adopted a plan calling for historic preservation and strict building codes.  All new buildings had to use the pueblo style, with beige adobe or plaster exteriors and exposed beams called vigas.  So in a sense, Santa Fe became a parody of itself.

Another unique aspect of Santa Fe is the merger of three distinct cultures – native American, Latino and Anglo.  Most of New Mexico’s Indian pueblos are within an hour’s drive.  Some of the residents with Spanish surnames are direct descendants of the original Spanish settlers.  Many of the Anglos attracted to the area were artists, giving the city a rich tradition of art and culture.

If it’s your first visit, you should allow at least two days just to skim the surface.  For one thing, it’s a city made for walking.  And with the 7,100-foot elevation, it’s prudent to keep your pace to a mosey.  Your first stop should be the plaza – the heart of old Santa Fe and the end of the Santa Fe Trail.  Much of what you want to see is within easy moseying distance.  You’ll need a car to visit the Canyon Road art district and some of the outlying museums.

On the north side of the plaza is the Palace of the Governors – one of America’s oldest landmarks and the oldest continuously occupied public building.  It was originally built between 1610 and 1612 to serve as the seat of Spanish government for much of the Southwest, including California.  It now houses the New Mexico Museum of History.  On the side facing the plaza, native Americans display and sell authentic arts and crafts.

More shops, including an indoor arcade, are on the opposite side of the plaza.  The historic La Fonda Hotel, built in 1922 on the site of Santa Fe’s original inn built in the 1600s, is opposite the southeast corner of the plaza.  Just a block or two south of the plaza are the Cathedral of St. Francis, built in the 1800s, and the Chapel of Loretto, home of the “miraculous staircase” (see photo).  Both are must-sees.

After your walking tour — or maybe before it — a great way to see the city is in a guided tram tour.  These depart from La Fonda and the Inn at Loretto.  My wife and I took this tour a few years ago and really enjoyed it.

If you have time, take a day to visit Taos, 1-2 hours north depending on your route.  The best route is known as the “High Road to Taos.”  It takes you through mountain villages where residents still speak Spanish with the dialect used in the 17th century.  Of special note is the village of Chimayo, which has three worthwhile attractions.  First, is the Sanctuario de Chimayo, a rustic chapel where the dirt beneath supposedly has miraculous curative power.  Next are the weaving shops; Chimayo has a long tradition of weaving, and you’ll find several shops that sell the village’s output.  And third is a restaurant called El Rancho de Chimayo, which has what I think is the world’s second-best carne adovada, a pork stew in a fiery sauce that’ll grow hair on the bottom of your feet.  (Read ahead for my recommendation on the best carne adovada.)

For a true Santa Fe experience, consider dropping a bucket of dollars on a hotel near the plaza.  The Inn of the Anasazi, La Fonda, Inn at Loretto and Hilton are good choices.  Otherwise, you’ll find a good selection of chain hotels (Hampton Inn, Holiday Inn Express, Best Western, Super 8, etc.) along the Cerrillos Road strip on the southwest side of the city.

If you’re flying, you can get flights on small regional jets into Santa Fe from Dallas-Ft. Worth or Los Angeles.  For many more choices (and a much lower fare), you’ll want to fly to Albuquerque and rent a car.

Santa Fe is a few miles off Interstate 25, about an hour’s drive north of Albuquerque.  Take exit 284 and follow signs to the plaza.  Parking can be tricky; be sure to access and print a parking map at www.santafe.org/images/Embed/7/2757-Downtown_Parking_Map.pdf

One of the great treats for Santa Fe visitors is the food.  Santa Fe is the mecca of New Mexican cuisine, which is different from the Mexican food served in other states.  It’s based on the state vegetable, the green chile, and is often very spicy.  My favorite Santa Fe restaurant is The Shed, in an arcade on Palace St. just east of the plaza.  It’s a tad pricey, but they make the world’s best carne adovada, as well as killer posole.  You’ll need reservations for dinner.  Check Yelp for other restaurant recommendations.  Wikipedia has a good introduction to New Mexican food at www.en.wikipedia.org/wiki/NewMexicancuisine

This week’s road trip takes us to Fort Scott END_OF_DOCUMENT_TOKEN_TO_BE_REPLACED

You can run out of adjectives really fast when describing END_OF_DOCUMENT_TOKEN_TO_BE_REPLACED