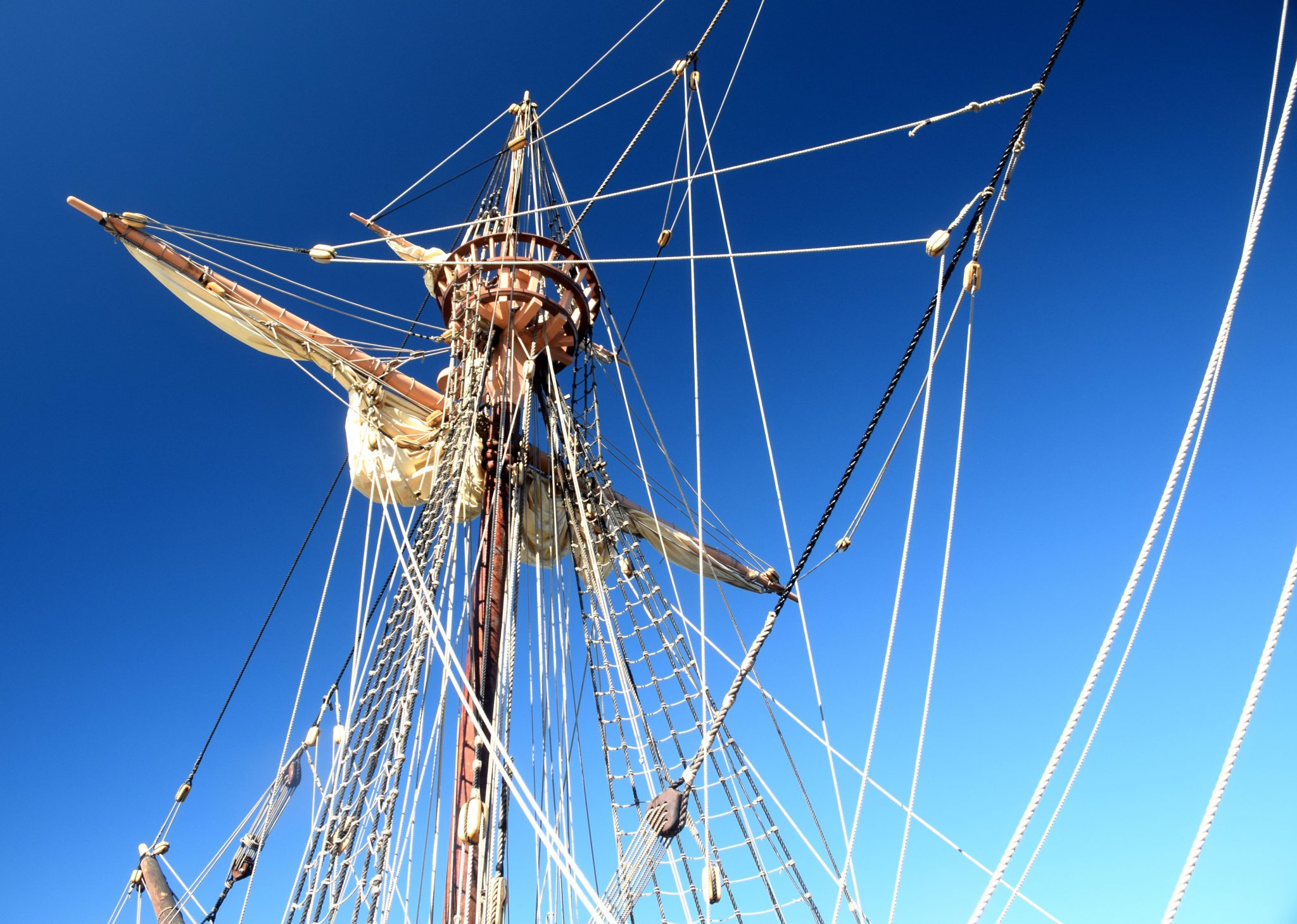 This week Road Trips with Tom casts away for the Maritime Museum of San Diego, where we’ll board some historic ships and maybe head out on the water in one of them.

This is probably the best museum of its kind on the West Coast.  As such, it’s one of San Diego’s top-tier attractions – ranking right up there with the zoo, Sea World, Old Town and the beaches.  If you live in Southern California, the museum is worth an all-day trip.  If you live elsewhere, put it on your San Diego bucket list.

Either way, plan on spending at least three hours here – more if you’ve reserved a trip on one of the tall ships.  Weekends are best due to the paucity of parking places during the week.  I’ll talk more about parking in the Getting There section below, because it’s an issue at the Maritime Museum.  In the Logistics section near the end of this post, you’ll find all the details on hours and prices.

You can find details on the museum’s collection and other visitor information at www.sdmaritime.org.  For a short video preview (no narration), go to www.youtube.com/watch?v=D0Vbc1OE0sM.

The Maritime Museum of San Diego has been around since 1948, with the magnificent tall ship Star of India as its main attraction.  Back when I was an AAA travel writer in the 1970s, it had just added the steam ferry Berkeley and the luxury steam yacht Medea.  The collection has grown substantially since then, and it continues to grow.

First, board the ferry

You’ll find the museum on Harbor Drive close to downtown San Diego.  The first thing you see is the Star of India, which is parallel-parked, or rather docked, right next to the sidewalk.  This gorgeous ship is one of those iconic things I can’t take my eyes off – like the Space Needle, Golden Gate Bridge, Statue of Liberty or the St. Louis Gateway Arch.

Here’s the lineup of attractions at the Maritime Museum of San Diego:

Built in 1898, the Berkeley is a steam ferry that served 60 years on San Francisco Bay.  On her upper deck are most of the museum’s exhibits, along with the beautifully designed passenger accommodations.  Down below, you’ll find the restrooms, as well as access to several other ships.  The Berkeley also houses the museum offices, research library and model shop.  As you board, you’ll pass a small snack bar.

On your left as you enter the Berkeley is the HMS Surprise – a replica of a 24-gun British frigate from the 18th century.  She was featured in the movie Master and Commander starring Russell Crowe.  I really enjoyed the Surprise; it’s as beautiful as the Star of India, but on a smaller scale.

Immediately behind the Surprise is a B-39 Soviet submarine built in the 1970s.  She’s huge – over 300 feet long.  If you board her, you’ll encounter some tight squeezes that you’ll hate but which kids love.

The Californian sailing ship wasn’t at the museum when I visited, so I don’t have a photo to show you. She’s a replica of an 1847 revenue cutter and is the official tall ship of the State of California.  From spring to fall, the museum operates daily tall ship rides aboard the Californian .

A replica of Cabrillo’s galleon

On the other side, you’ll find a set of stairs leading down to the 152-foot Dolphin – the deepest diving submarine ever built.  She was commissioned in 1968.  Next to the Dolphin is the Medea, a luxury steam yacht built in 1904 of steel, teak and oak.  In addition to serving as a yacht for wealthy individuals, she spent time as a French navy gunboat and a Royal Navy ship.

The same dock is the boarding area for the museum’s two harbor cruises.  The 40-minute cruise is on a 1914 pilot boat that spent many years assisting cargo ships entering and leaving the Port of San Diego.  There’s also a 75-minute cruise aboard a PCF Swift Boat that served as a Maltese Navy coast guard ship.  “PCF” stands for “patrol craft fast.”

Next, head down to the lower deck’s aft section for access to another dock.  There, on your right, is the San Salvador, a replica of the Spanish galleon Juan Rodriguez Cabrillo sailed when he made the first European discovery of California in 1542.  The San Salvador was built here in San Diego.  Work is still ongoing, so she can only be viewed from dockside.  The featured photo at the top of this post is her rigging.

Across the dock is the America – a 130-foot racing schooner famous for winning the historic Royal Yacht Squadron race.  The trophy became known as the “America’s Cup.”  The Maritime Museum uses the America for whale watching cruises and corporate events.  When not in use, she’s viewable only from dockside.

The Star of India

And now for the piece de resistance – the Star of India.  Exit the Berkeley, turn right and board via the special stairs.  The Star of India is the world’s oldest active sailing ship.  She was built in 1863 on the Isle of Man as the Euterpe.  She’s a three-masted, iron-hulled windjammer that’s 278 feet long (including spar), with a 35-foot beam.  Her hull, cabins and equipment are almost 100 percent intact.

Despite her magnificence, the Star of India’s maritime career was fairly mundane.  She served as a cargo ship in the jute trade between Britain and India.  Next, she spent 25 years ferrying emigrants from Britain to New Zealand, then was used in the salmon trade in Alaska,  She was retired in 1923.

You can spend as long as you want on board, exploring this magnificent vessel.

Getting to the Maritime Museum

From Interstate 5, take the Airport exit and follow the signs to “Embarcadero – Maritime Museum.”  It’s easy to find, but not so easy to park.  There are a few metered spaces right in front of the museum; if you arrive first thing on a Saturday or Sunday, you might be able to grab one.  After 3 hours, you’ll need to feed the kitty or risk a ticket.  The closest commercial lot is the county administration building lot entered from Ash St. just east of Harbor Dr.

For my visit in December, I parked at the Old Town Transit Center and took the trolley.  From the Little Italy trolley stop, it’s a three-block walk to the museum.  Visitors riding Amtrak to San Diego can ride the trolley either from Old Town or the Santa Fe Depot at the end of the line.

After leaving the museum, I had lunch next door at Anthony’s Fish Grotto, which opened in 1946.  You won’t have that option, because the Port of San Diego refused to renew the restaurant’s lease, forcing it to close January 31.

The Maritime Museum of San Diego is open daily from 9 a.m. to 8 p.m.

Tall ship cruises aboard the Californian operate from noon to 3 daily from spring to fall.  Tickets must be purchased online in advance.  They cost $60 for adults, $57 for seniors, military and students, and $48 for ages 3-12.

Thanks for visiting Road Trips with Tom.  If you enjoy this blog, please tell your friends about it.

On Sunday, March 5, we’ll head to the desert for a road trip to Joshua Tree National Park.

This week’s road trip takes us to Fort Scott END_OF_DOCUMENT_TOKEN_TO_BE_REPLACED