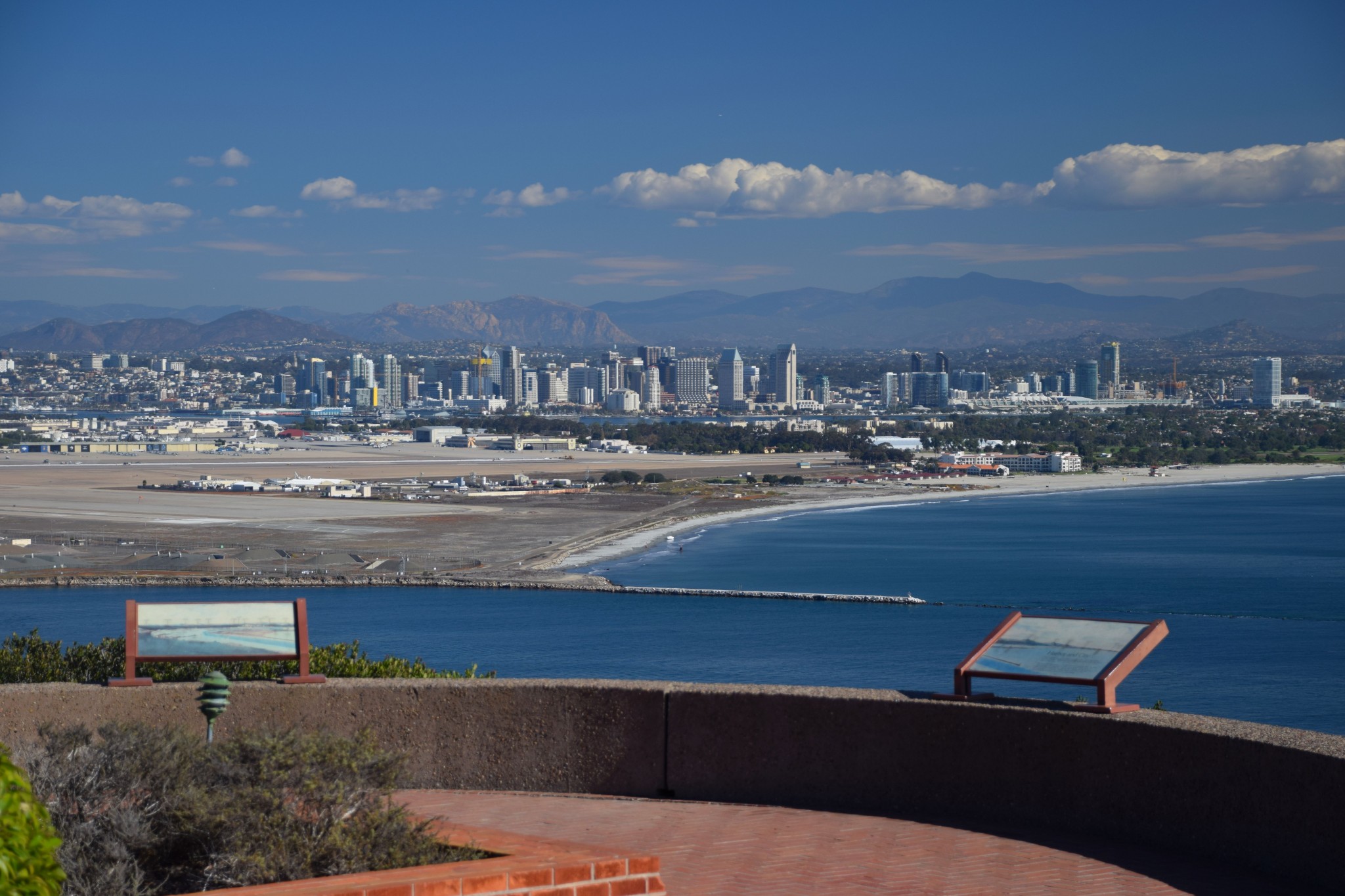 This week Road Trips with Tom heads for Cabrillo National Monument in San Diego.  The monument commemorates the first European discovery of what is now California in 1542.

You’ll find it on the tip of Point Loma, the narrow finger of land that separates San Diego Bay from the Pacific Ocean.  Here, three ships under the command of Juan Rodriguez Cabrillo landed and claimed Alta California for the Spanish crown.

Cabrillo National Monument combines historic significance with one of the most spectacular urban views in the country.  By itself, it’s not worthy of being a road trip destination, but it’s definitely one of the must-see attractions for anyone visiting San Diego.

We’ll start by tearing our eyes away from the view and focusing on California’s history.  California was settled much later than the East Coast, but it’s 60-some years older in terms of its first European discovery.

Juan Rodriguez Cabrillo was a Portuguese-born navigator sailing for Spain.  He came to the New World as one of the conquistadores led by Hernan Cortes.  From a base in Mexico, Cabrillo became wealthy mining gold in Guatemala, having enslaved the native people.

To the Spanish, the waters north of Mexico were a complete mystery.  Were there cities of gold?  Were there trade opportunities?  Was there a passage to China?

In June 1542 the Viceroy of New Spain sent Cabrillo to explore the west coast of North America.  On September 28 his three ships sailed into San Diego Bay and landed – nobody knows exactly where.  After claiming his discovery for Spain, Cabrillo hobnobbed peaceably with the native Kumeyayy people.  He then made like the Chargers NFL team, stealing away and sailing north to what’s now Los Angeles.

Did the Spanish forget about California for 160 years?

Later that year, Cabrillo injured his leg in what was seemingly a minor fall, but the leg became badly infected, and he died in January 1543.  Legend has it that he was buried on San Miguel Island, but no grave has ever been found.  His second-in-command, a man named Ferrelo, continued north as far as Oregon, then turned around and returned to Mexico.

Cabrillo’s discoveries went largely unnoticed.  The place names he bestowed didn’t stick.  Not until 1602 did the Spanish send another expedition to Alta California.  Sebastian Vizcaino, its leader, gave San Diego and many other coastal features the names they bear today.  Interestingly, Vizcaino, like Cabrillo, failed to discover San Francisco Bay – it must’ve been foggy.

Afterward, Spain changed viceroys, and the new one was uninterested in northward expansion.  It wasn’t until 1769 that San Diego became the first European settlement in what is now California.

Logistics for your visit to Cabrillo NM

Okay, let’s fast-forward to your visit.  The first step is to find the monument.  Here’s how:

Cabrillo National Monument is open 9-5 daily.  The entrance fee is $10 per vehicle, $7 for motorcycles and $5 for bicycles.

From the entrance station, follow the roadway to the visitor center parking lot.  The lot can fill up on summer days and weekends, so it’s wise to arrive early.

The visitor center has a small museum and the usual bookstore/gift shop.  Helpful rangers are on hand to answer questions.  Three video programs are presented in the auditorium.  For a 3-minute video preview, go to www.youtube.com/watch?v=x9PoBgMTG5A

Now . . . about that view.  I hope you’ve picked a clear day for your visit, like the day these photos were taken (early December 2016).  The monument sits at an elevation of 400 feet.  On the patio behind the visitor center you’ll find a great viewpoint with interpretive signs.  Another excellent view is from the Cabrillo statue just south of the visitor center.  In the foreground is the entrance to San Diego Bay.  Just beyond that is the North Island Naval Air Station and, beyond that, the skyline of the city.  To your left are Shelter Island, the big navy base and the airport.  To your right are the hills behind Tijuana, Mexico.

While at Cabrillo National Monument, you’ll want to visit the iconic Point Loma Lighthouse.  It’s about a ¼ mile walk (all uphill) from the parking lot.  The lighthouse dates from 1855.  Unfortunately, its location 400 feet above the ocean meant it couldn’t be seen in foggy weather.  In 1891 it was replaced by a newer lighthouse at the base of the cliff.

The old lighthouse is open for self-guided tours.  You can climb the narrow spiral staircase to the keeper’s quarters.  Next door, the former assistant keeper’s quarters have been converted into a lighthouse museum.  As you descend the hill after touring the lighthouse, you’ll have another nice view that includes the visitor center and Cabrillo statue.

A replica of Cabrillo’s ship

During winter, you can explore the tidepools on the ocean side of the monument.  A side road runs west just south of the entrance station and winds down the cliff to two parking areas.  You’ll need to visit the tidepools at low tide.  For a monthly San Diego tide table, go to www.ca.usharbors.com/monthly-tides/global/San%20Diego/2017.

Plan on spending about two hours at Cabrillo National Monument.  While in San Diego, I recommend you also visit the Maritime Museum on Harbor Drive.  One of its exhibits is a full-size replica of the San Salvador – the 200-ton galleon that was Cabrillo’s flagship.  We’ll have a separate post on the maritime museum in mid-April.

Thanks for visiting Road Trips with Tom.  Please come back on Sunday, January 15, as we visit the cool small town of Port Townsend, Washington.

This week’s road trip takes us to Fort Scott END_OF_DOCUMENT_TOKEN_TO_BE_REPLACED

You can run out of adjectives really fast when describing END_OF_DOCUMENT_TOKEN_TO_BE_REPLACED