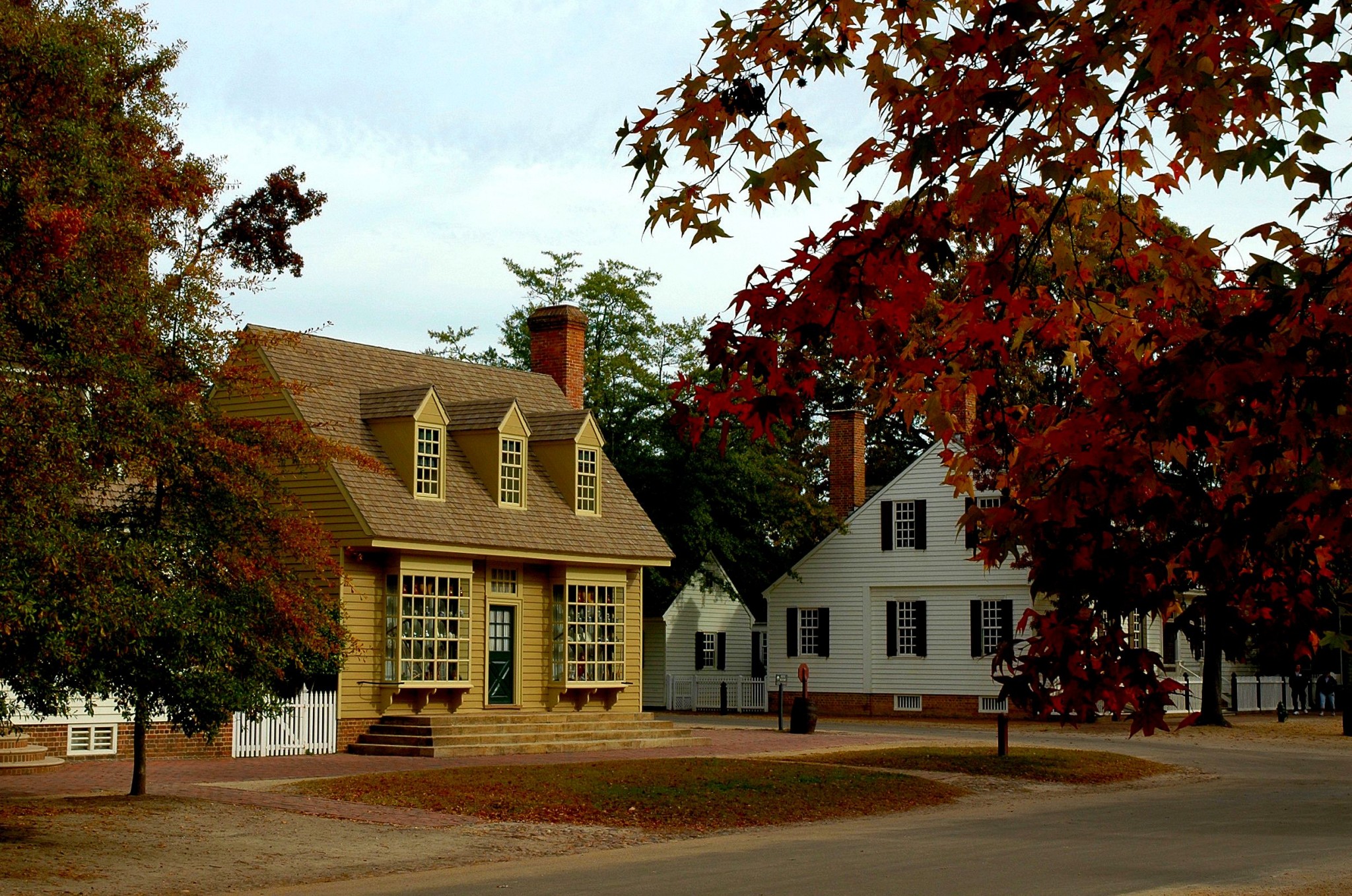 This week we’re headed to southeast Virginia for a visit to Colonial Williamsburg – the nation’s largest, most significant living history museum.

Williamsburg isn’t a side trip.  It’s a primary road trip destination.  If you’re traveling with school-age kids, you can combine it with a visit to Washington, D.C., for a nice learning experience.

If you’ve never been there, pause now, and put it on your bucket list.  No other historic site offers a better way to experience what life was like way back when.  By “way back when,” I’m talking about the 1700s – three generations before the first European settlement of the U.S. west coast.

What you’ll see here is a 301-acre site with hundreds of buildings that are either 18th-century originals or meticulous reproductions.  You’ll also meet hundreds of staff members wearing authentic 18-century attire and performing 18th-century tasks.  It’s essentially a time capsule of the period when Williamsburg was Virginia’s capital city.

The first European settlement in what’s now the United States occurred in 1607 on swampy, mosquito-infested Jamestown Island.  That’s where, as the song goes, “Captain Smith and Pocahontas had a very mad affair.”  After struggling early on, Jamestown became successful as a tobacco-growing area, and served as Virginia’s capital for most of the 1600s.

Meanwhile, a fortified settlement called Middle Plantation was established in 1632 a few miles away on the mainland.  In 1698, the statehouse in Jamestown burned down, and the capital was moved to Middle Plantation.  The new capital was rechristened Williamsburg after King William III.  Williamsburg served as Virginia’s capital until after the Revolutionary War, when it was moved to Richmond.  Williamsburg then entered a long period of decline and stagnation.  During the Civil War, this was part of the Confederacy but managed to avoid the worst of the conflict and survived largely intact.

Fast-forward to the 20th century:  As early as the 1920s, the rector of the Bruton Parish Church (still standing – the church, not the pastor) began to champion a vision of a living history museum.  His idea struck gold when the pastor enlisted the support of John D. Rockefeller, Jr., and his wife.  The Colonial Williamsburg Foundation was established.  It subsequently invested buckets of money on the ensuing restoration.  It still owns and manages the site.

How to get there

The living history museum is surrounded by a city of 14,000 people, which is also the site of the College of William and Mary (dating from 1693).

Williamsburg is about midway between Norfolk and Richmond.  It’s easily reached via I-64.  Take Exit 243 if you’re coming from Norfolk, then continue on US 60 into the city.  If you’re coming from Richmond, use Exit 238 and follow the signs.  US 60 is lined with hotels, motels and restaurants.  Signs will direct you to the historic area.  Most people begin at the Visitor Center, where you park, buy your tickets and catch the shuttle into the site.

Many people flying here from other parts of the country land at Dulles or Reagan airports near Washington.  It’s about a 3- to 4-hour drive (south on I-95 to Richmond then east on I-64).  You can also fly into either Richmond or Norfolk, both of which are about an hour away.

Colonial Williamsburg’s web site is www.colonialwilliamsburg.com.  I found the site to be confusing, frustrating and poorly organized.  Check it out, and see what you think.  I know one thing:  It’s a heckuva lot easier to find out how to donate to the foundation than to find out the hours and prices.  There is a toll-free number you can call for information that should be prominently displayed online,  but isn’t.

One thing to keep in mind:  Colonial Williamsburg may be a nonprofit organization, but they’re fairly aggressive about separating you from your moola.

The Visitor Center is open daily 8:45 to 5.  How much does it cost?  Well, the museum is operating under a reduced schedule until January 27, and the Visitor Center is closed during this period.  For now, the web site is only quoting the price of an annual pass, which you have to buy online. Unless you live in the area, pass on the pass.

While the Colonial Williamsburg Foundation wants you to come on multiple days and stay in one of their overpriced lodgings, I think a single-day pass is enough for most people.  Look under the “Tips” heading for information on lodging and food.  If you plan to visit Williamsburg later in the year, check out the web site after February 1.  I seem to recall the adult price of a single-day ticket is about fifty bucks.

Several special events are scheduled throughout the year.  Some cost extra.  Check the web site for details.

While it’s possible to stroll the historic area without a ticket, you won’t be able to park at the Visitor Center, enter the buildings, interact with costumed interpreters, or ride the handy shuttle bus without one.  You only live once, so pony up and buy the tickets.

What’s there to see?

The main drag of the historic area is mile-long Duke of Gloucester St., which is lined with historic homes and shops.  Flags indicate buildings you can enter with an admission ticket.  In most of the shops, by the way, the wares are for sale, including items you might not find anywhere else.  No tacky souvenirs here. If you’ve always wanted one of those three-cornered hats, you’ve come to the right place.

Major buildings along the way are the Bruton Parish Church (original), the Governor’s Palace, the Courthouse (original), the Capitol and the George Wyeth House (also original), home of a prominent law professor and judge who was an original signer of the Declaration of Independence and an opponent of slavery.

Speaking of slavery, it seems to be the elephant in Williamsburg’s parlor.  Slavery flourished here during the Colonial era.  In my visits, I didn’t see anyone portraying a slave.  In fact, I saw several African Americans portraying tradespeople and other colonial citizens — roles not available to their ancestors.

At the west end of Duke of Gloucester St. is Merchants Square.  There, you’ll find more upscale shops and eateries.  Nearby are a couple of museums that charge an additional admission fee.  Just west of Merchant’s Square is the beautiful William and Mary campus.

There are also four historic taverns serving food and drink representative of the Colonial era.  I recommend you have lunch at one of them.  You may have to make a reservation at the Visitor Center when you arrive.

I’ve made three visits to Colonial Williamsburg over the years.  Here are some suggestions based on those visits:

Thanks for visiting Road Trips with Tom.  On Sunday, January 15, we’re returning to San Diego for a visit to Cabrillo National Monument.

I’m flying to Tucson January 17 to visit Old Tucson Studios and Saguaro National Park, then driving I-10 to Las Cruces to visit Old Mesilla and eat New Mexican food.  The trip should result in at least three future blog posts.

This week’s road trip takes us to Fort Scott END_OF_DOCUMENT_TOKEN_TO_BE_REPLACED