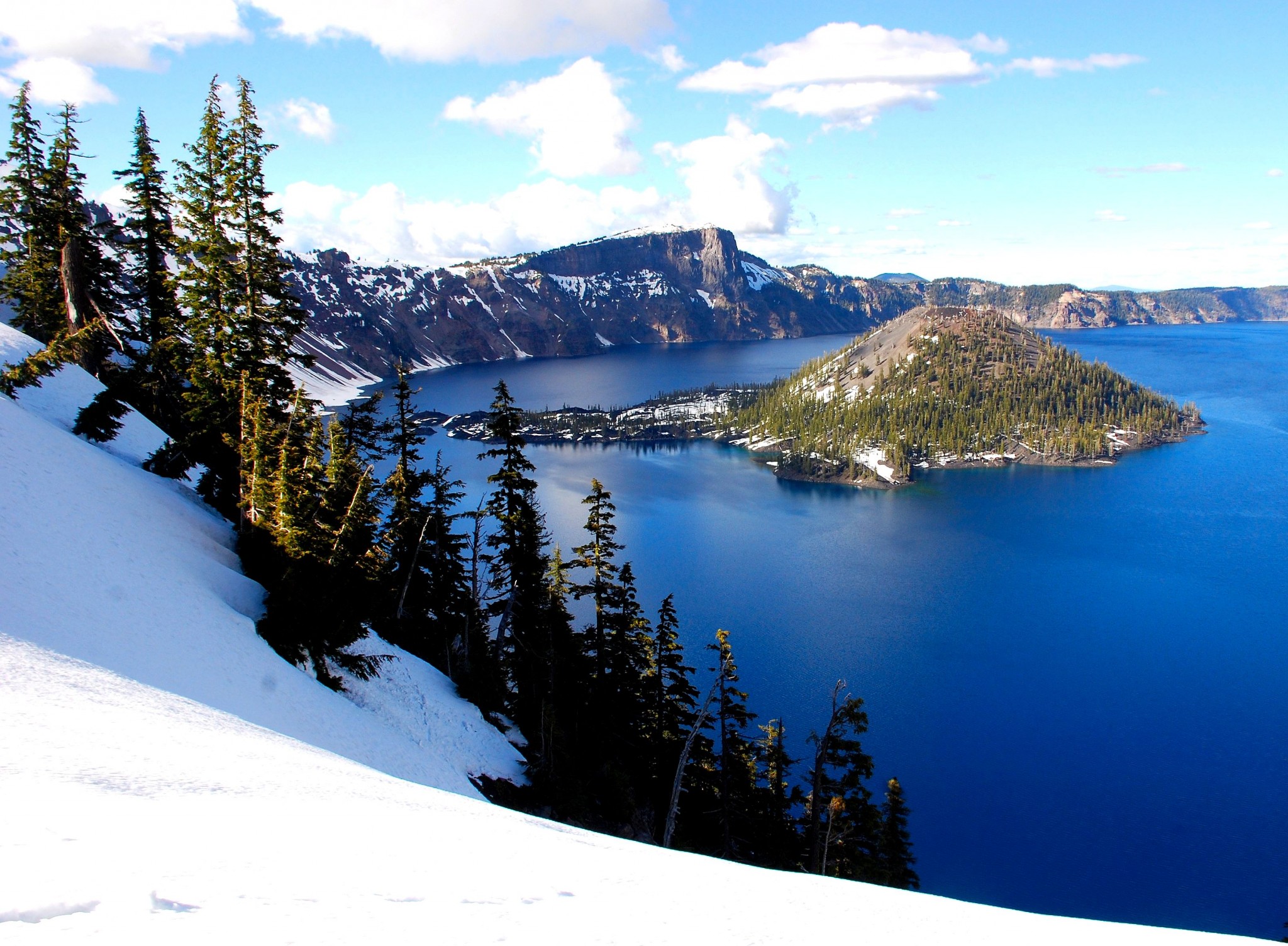 This week, Road Trips with Tom is in Oregon to visit beautiful Crater Lake National Park.  This blog post was originally scheduled to appear a few weeks ago, but it was postponed because a wildfire had closed the park’s busiest road and forced the evaluation of the rim village.

In this post, you’ll find just about everything you need to know about visiting Crater Lake.  The good news is that September is probably the best month to visit.  You can expect good weather.  The crowds, which were oppressively large when I visited in late July, are mostly gone.  Turnouts and viewpoints, which were overflowing with cars during my visit, will now welcome you.  Roads, lodges and campgrounds are still open.

If you’re considering a visit to Crater Lake next summer, consider this:  Even though it has only a tad more visitors than Lassen Volcanic National Park, which we visited two weeks ago, those visitors are compressed into a much smaller area.  The visitor center, lodge, main campground and classic viewpoints are all close to each other.  Summer visitors will find large, oppressive (to me, at least) crowds in this area and several other viewpoints along the lake rim.  Even finding a parking space is a daunting challenge.   Spring isn’t an option — the park’s prodigious snow cover isn’t plowed until as late as July — so September and early October are the best times to visit Crater Lake National Park.

“Can we go to McDonalds now?”

There are over 400 units in our national park system, which is celebrating its centennial this year.  I’ve found that every unit, from the smallest national historic site to huge national parks like Yellowstone or Death Valley, is a treasure.

But there are some that you can gawk at, snap a photo or two, then leave with no regrets.  I’m reminded of when my wife and I took our daughter to the Grand Canyon when she was 4.  We said, “Look, Julia, the Grand Canyon!”  She dutifully looked at the canyon, then said, “That’s nice.  Now can we go to McDonalds?”

Of course, most of us road trippers know that the Grand Canyon is never the same twice, depending on weather, time of day and which viewpoint you visit.  For a lot of people, however, it doesn’t take long until they feel they’ve been there and done that.  There are other parks that get the same reaction:  Beautiful, fascinating, but not necessarily worthy of in-depth exploration.  The best example I know is Mt. Rushmore.  You pay an exorbitant parking fee, walk down a courtyard, ride an elevator and – da DA! – there it is.  There’s nothing else to do there, unless you want to buy tacky souvenirs in the gift shop.

Crater Lake is one of those parks.  I recommend you stop at the visitor center, drive the lake’s circumference, then leave.  That will take about three hours.  It actually takes less in summer, because you won’t be able to find a parking space at the visitor center, rim village or the most popular viewpoints.

Having said all that, Crater Lake IS spectacular and worthy of being on your bucket list.  It’s the deepest shade of blue you’ll ever see.  But keep in mind that the overwhelming majority of visitors come in July and August.  Parking spaces, lodge rooms and campsites are very hard to come by.

About 7,700 years ago, Mt. Mazama was a 12,000-foot volcano that erupted so violently it destroyed itself.  Over the years, its crater filled with rain and snow to create the deepest (1,943 feet) lake in the United States.  The deep azure color is caused by the purity of the water.  Crater Lake is one of the world’s cleanest lakes.

More recently, another volcano rose within the lake.  It’s known as Wizard Island and has its own crater.

The lake’s surface elevation is 6,173 feet.  The rim rises as high as 7,960 feet at Cloudcap Overlook – the highest point on any road in Oregon.

Are we there yet?

Crater Lake National Park is a day’s drive from Seattle, Portland or the San Francisco Bay Area.  Allow two days from Los Angeles, Orange County, San Diego, Phoenix or Las Vegas.  During the park’s main visitor season (July-October), you can enter the park from the north or south.  The north entrance is closed the rest of the year.  Crater Lake receives massive amounts of snow (up to 43 feet!), and only the rim village is accessible until June or even July.  Everything else was closed when the featured photo at the top of this post was taken on June 11, 2010.

From the junction with the north entrance road, the West Rim road runs south then east to the rim village, and the East Rim Road runs east, south and west to the same destination.  The East Rim road is much longer, but far less crowded in summer.

Most visitors come via US 97, which bisects Oregon from north to south. If you’re headed north on US 97, turn onto SR 62 at a junction 21 miles north of Klamath Falls.  From the junction, it’s about 30 miles to the park entrance and another 5 to the rim village.  SR 62 also connects Crater Lake National Park with Medford on I-5; it’s about 75 miles.

From southbound US 97, turn west onto SR 138 at a junction 74 miles south of Bend, then drive 15 miles west to the park’s north entrance road.

What’s there to do?

After you pay your $15 per vehicle entrance fee ($10 for motorcycles), I recommend you stop at a visitor center.  The main one is a few miles south of the rim village; it’s open 9-5 daily through October and 10-4 daily the rest of the year.  The Rim Visitor Center is open 9:30-5 until late September.  When you get to the lake, stop at the Sinnott Memorial Overlook for a great view – although good luck finding a parking space there in summer!  Then drive both rim roads.  If you only have time for one, take the East Rim Drive.  It’s longer, but you’ll still have nice views, and your photos won’t look like everyone else’s.  Not only is the West Rim Drive much more crowded, it’s also currently under construction, with delays of up to 30 minutes.  The construction should be completed in time for the 2017 visitor season.

Want to stretch your legs.  The park has several trails with varying degrees of difficulty.  Be sure to consult the park’s web site:  www.nps.gov/crla. In it you’ll find all the details you need.  One tricky element is the list of hiking trails.  Follow this path from the home page:  Learn About the Park >> News >> Park Newspaper >> Summer/Fall 2016 edition >> page 4.  While on the web site, be sure to check Current Conditions for road status.

The popular boat tours to Wizard Island have been discontinued for the year and will resume in July 2017.

Crater Lake Lodge and Mazama Cabins offer overpriced rooms on a seasonal basis.  You’ll find food service at Rim Village (if you can find a parking space).  Food is available on a limited basis year-round.  My recommendation is to stay in Klamath Falls, Medford or Bend before or after visiting the park.

There are two campgrounds – both open seasonally.  The largest, Mazama, has reservable sites; get details on how to reserve from the web site.  It has pull-through sites for RVs and even a few sites with hookups.  Some spaces are kept on a first-come, first-served basis, but these are usually gone by noon each day.  The web site also has details on campsite fees.

Thanks for visiting Road Trips with Tom.  Next Sunday, September 11, we’ll make an international trip to Old Montreal in Quebec – La Belle Province.  Then, on September 18, we’ll be in Reno to visit the awesome National Automobile Museum.

This week’s road trip takes us to Fort Scott END_OF_DOCUMENT_TOKEN_TO_BE_REPLACED

You can run out of adjectives really fast when describing END_OF_DOCUMENT_TOKEN_TO_BE_REPLACED