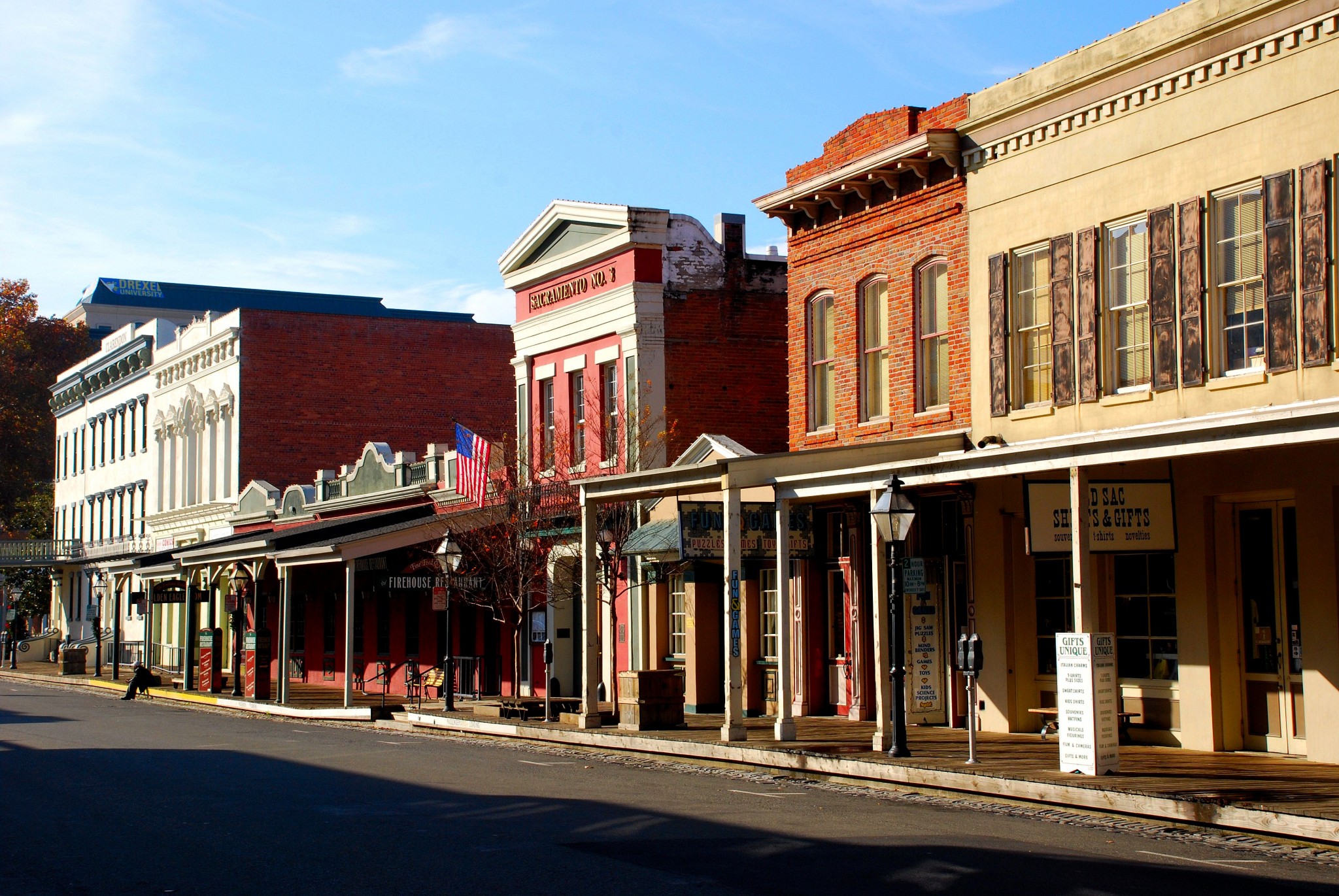 Old Sacramento is wedged into a 296-acre site between Interstate 5 and the Sacramento River.  At first glance, you might conclude it’s just another tourist trap with a historic theme.  After all, what meets your eye are dozens of old buildings full of shops hawking T-shirts, kitschy souvenirs and junk food.

Old Sac, as the locals call it, may be a tourist trap, but there’s plenty of substance behind that façade.  Here, where Sacramento began, was the western terminus of the first transcontinental railroad, first transcontinental telegraph line and the legendary Pony Express.  It was also the primary supply point for the Gold Rush that rocketed California from a sleepy Mexican outpost into a dynamic U.S. state.

For road trippers, it’s a great place to visit.  Kids love it.  It may not be a trip destination by itself, but it’s definitely a worthwhile stopover if you’ll be driving on I-5 or I-80 in central California.  It’s an easy day trip from the San Francisco Bay Area and just a day’s drive from Los Angeles, Orange County, Las Vegas or Portland.

Its centerpiece is the world-class California Railroad Museum, which you should consider a must-see requiring about two hours of your time.  Add another two hours to stroll past the 50-odd historic buildings, have lunch, and browse some of the shops and smaller museums.  So figure on a half-day for your visit.

Old Sacramento is a great place for walking.  The terrain is flat, and everything is accessible to wheelchairs.  But if you prefer, hop on a horse-drawn carriage and tour in style.

I thought having an elevated freeway on one side would detract from the area’s ambience, but during my visit on a very hot day last month it seemed to be exactly the opposite.  The freeway separates the historic area from the modern city and gives it a distinct character and welcome sense of isolation it wouldn’t otherwise have.  Most of the buildings are restorations or re-creations of structures built in the mid- to late 19th century, not long after California became a state in 1850.  Thanks to the freeway, the high-rises of modern Sacramento are pretty much out of sight and out of mind, making it easier to immerse yourself in the park’s general vibe.

This is a popular spot that attracts five million visitors per year.  Yet, it didn’t seem overcrowded when I was there on a Saturday afternoon in late July.  In fact, having lots of visitors on the streets added to the festive atmosphere.  Normally, I find crowds oppressive, but that didn’t happen here.

I recommend you spend a few minutes checking out an online resource before leaving home.  Forget the state historic park’s web site – it’s fairly useless.  Instead, go to the convention and visitor bureau site at www.oldsacramento.com.  If you can’t find what you want there, you probably don’t need to know it.  I’ll provide directions and parking information in the Logistics section.

You’ll want to start by visiting the California Railroad Museum, a huge indoor facility that displays rotating exhibits depicting life along California’s historic rail lines.  I loved this place, and you will, too. All the rolling stock has been lovingly restored.  It includes 19 vintage steam locomotives, along with passenger and freight cars.  The children who were there during my visit appeared to be enthralled.  There’s a special interactive section for kids on the upper level.

Some exhibits let you climb aboard.  These include a Pullman car, dining car and locomotive.  Volunteer docents are stationed throughout the museum.  They give short talks and answer visitors’ questions.

The museum is open 1-5 daily.  Admission is $10 for adults and $5 for ages 6-17.  You’ll find lots of details on the exhibits at www.californiarailroad.museum.

Want to ride a train?  Rides are given every Saturday and Sunday between April 2 and September 25.  Cars include closed coaches, open-air gondolas and first-class observation cars.  These are pulled by either steam locomotives or vintage diesel locomotives.  Rides, which last 45 minutes, depart hourly between 11 a.m. and 4 p.m.  These are immensely popular, so it’s a good idea to purchase tickets online in advance.

Something to keep in mind:  Sacramento can be an oven in summer, and only the first-class cars are air conditioned.  In fact, if it’s too hot, the rides are cancelled.  That’s what happened the day I visited, when it was 106 degrees.  If it’s a hot day when you visit, consider ponying up for first class.  Fares are $12 for adults and $6 for ages 6-17.  First class costs $20 for adults and $15 for ages 6-17.  The trains depart from the Central Pacific Freight Depot on Front St. between J and K Sts. – a couple of blocks from the main museum.

Old Sacramento has a few other museums that might interest you.  The Wells Fargo Museum at 1000 Front St. (open 10-5, free) recreates a 19-century Wells Fargo office, complete with an operational telegraph.  Go to www.wellsfargohistory.com/museums/sacramento for details.

Old Sacramento has over 100 businesses, most of which open at 10 a.m. and don’t close until early evening.  Some of the most popular shops are the candy stores, fudge shop and ice cream stores.  You’ll also find a good choices of places to have lunch.

To get to Old Sacramento, exit I-5 at J St.  If you’re northbound, continue straight to I St., then turn left.  Stay in the left lane as you cross under the freeway.  Just before the street makes a left turn (in front of the railroad museum), enter the main parking structure.  Yeah, they’ll charge you a few bucks, but you’ll be right across the street from the railroad museum, and your car will be out of the sun.

If you’re southbound on I-5, take the J St. exit, then turn right on I St., and follow the directions provided above.

Want to stay overnight?  You’ll find hotels within walking distance, including the Delta King riverboat moored in the river next to the historic area.

Thanks for visiting Road Trips with Tom.

Next week, we’ll make the visit to Oregon’s Crater Lake National Park that we had to postpone a few weeks ago due to a wildfire there.  The Crater Lake post will be published Sunday, September 4.  You might also want to brush up on your high school French, because we’ll be heading to Old Montreal a week later.

This week’s road trip takes us to Fort Scott END_OF_DOCUMENT_TOKEN_TO_BE_REPLACED

You can run out of adjectives really fast when describing END_OF_DOCUMENT_TOKEN_TO_BE_REPLACED