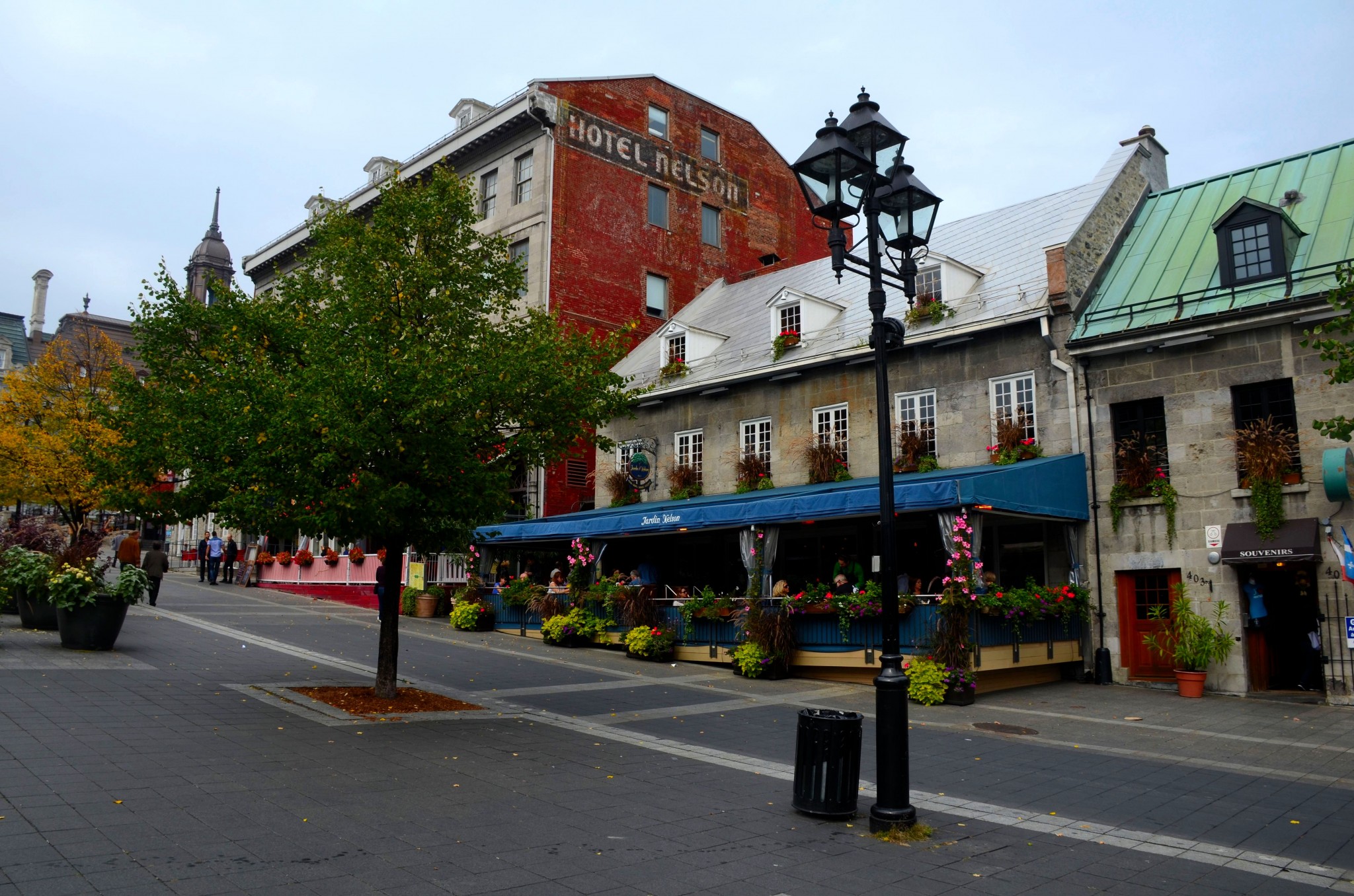 This week, Road Trips with Tom heads north across two borders to Quebec.

Two borders?  The first is the U.S.-Canadian border.  The second border is an abrupt culture and language change, similar to what you might experience traveling from California into Mexico.

Quebec may officially be part of Canada, but you’d hardly know it.  It’s really a world of its own, where French is the language and the only things an outsider sees as visibly Canadian are the currency and the postal system.  This is La Belle Province – the most European destination in North America and a fascinating place to visit.

Specifically, we’re headed to Old Montreal, or Vieux Montreal, where Quebec’s largest city was founded and which is still the beating heart of the city.  The article is relatively short, but you’ll find lots of photos and many links to additional information.

Normally, this blog avoids major cities.  Exceptions are cities or parts of cities with distinct historic and cultural identities.  Examples in past postings have included Santa Fe and New Orleans.

Before we get into details on Old Montreal, let me give you a brief introduction to Quebec, in case you haven’t been there before.  You’re no doubt aware that the passionate desire by Quebecois to preserve their cultural and linguistic identity has been a thorny issue in Canada that’s, on occasion, threatened to tear the country apart.  These days, there appears to be an uneasy detente between francophones and anglophones.  You won’t see the Canadian flag (except on the post office).  Instead, the fleur d’lis flag of Quebec is everywhere.  People here identify themselves as Quebecois and not Canadians.

No toothpaste aisle at Wal Mart

Here’s what you need to know to make the most of your visit:

All signs are in French, thanks to a law passed in the 1970s requiring all signage to be in French only.  Need a tube of toothpaste?  You’ll find Wal Marts in Quebec, but don’t look for the toothpaste aisle, at least by that name.  An enforcement unit roams the province to ensure compliance.  That’s right – language police!

The site was first claimed by Samuel de Champlain as a fur trading post in 1605 (15 years before the Pilgrims landed at Plymouth Rock).  The native Iroquois drove the French away, but they returned in 1642 and founded a permanent settlement along the St. Lawrence River.  Led by Paul Chomedey de Maisonneuve, or Sieur Maisonneuve, the French built a fort and a wall around the settlement, which was originally called Ville-Marie.  The name was changed to Montreal in the 1700s.  During the French colonial period, a series of fires destroyed hundreds of structures, prompting France to issue a royal order to ban wood construction.  Old Montreal is now dominated by buildings constructed of stone.  Most were built in the 1700s and 1800s.

The British took over in 1763.  They tore down the walls and expanded Montreal beyond what is now Old Montreal.  Eventually, Montreal became a center of finance and commerce, growing to become Canada’s second-largest city and the world’s second-largest French-speaking city.

Plan on hoofing it

If you want more details on the city’s history, go to https://en.wikipedia.org/wiki/History_of_Montreal

Old Montreal is relatively compact and is best seen on foot.  In fact, this is one of the best urban areas for walking I’ve experienced.

Your first task if you arrive by car is to park it.  Fortunately, parking is relatively easy here.  I parked at Quai de l’Horloge at the foot of Rue Bonsecours.  This is  #50 on the parking map accessed at www.congresmtl.com/wp-content/uploads/2012/06/vieux_montreal_park_en.pdf

I found several walking tour maps online.  The best one, which includes links to points of interest along the way, is at www.vieux.montreal.qc.ca/tour/eng/0cartea.htm

What I enjoyed most when I visited Old Montreal was strolling down the narrow streets, looking in windows and watching people.  You won’t find a better people-watching place than this.  And the single best people-watching spot is Place Jacques Cartier, located 3-4 blocks west of Quai d’Horloge via Rue St.-Paul.  One thing I noticed:  The locals dress a lot better than the tourists.  Most Montrealers have a great sense of style, especially the women.

There are several museums that might interest you.  Keep in mind, however, that most explanatory signs are in French.

A don’t-miss attraction is the spectacular Notre Dame Basilica (Basilique Notre-Dame de Montreal), opened in 1829.  From the outside, it’s not the most beautiful church you’ve ever seen; in fact, it looks like a fortress.  But inside – ooh la la!  You’ll pay a few looneys for admission, but it’s well worth it.  Just north of the basilica is Place d’Armes, a large square that’s another outstanding people-watching spot, where you’re typically find street musicians, jugglers and lots of tourists.

To get to Old Montreal from the Trans Canada Highway, take Autoroute 15 south to Autoroute 720, then drive east to Exit 7.  (Autoroutes are Quebec’s freeways.)  Hotel/motel accommodations are abundant in the area.

Hungry?  Here’s a list of recommended restaurants in the area:  www.zomato.com/montreal/old-montr%C3%A9al-restaurants

Shopping is another popular tourist activity in Old Montreal.  The official guides to Old Montreal talk about fine shops, but all I saw were kitsch parlors like the one pictured at left.

Thanks for visiting Road Trips with Tom.  Next week we’ll check out the amazing collection at the National Automobile Museum in Reno, Nevada.

This week’s road trip takes us to Fort Scott END_OF_DOCUMENT_TOKEN_TO_BE_REPLACED

You can run out of adjectives really fast when describing END_OF_DOCUMENT_TOKEN_TO_BE_REPLACED