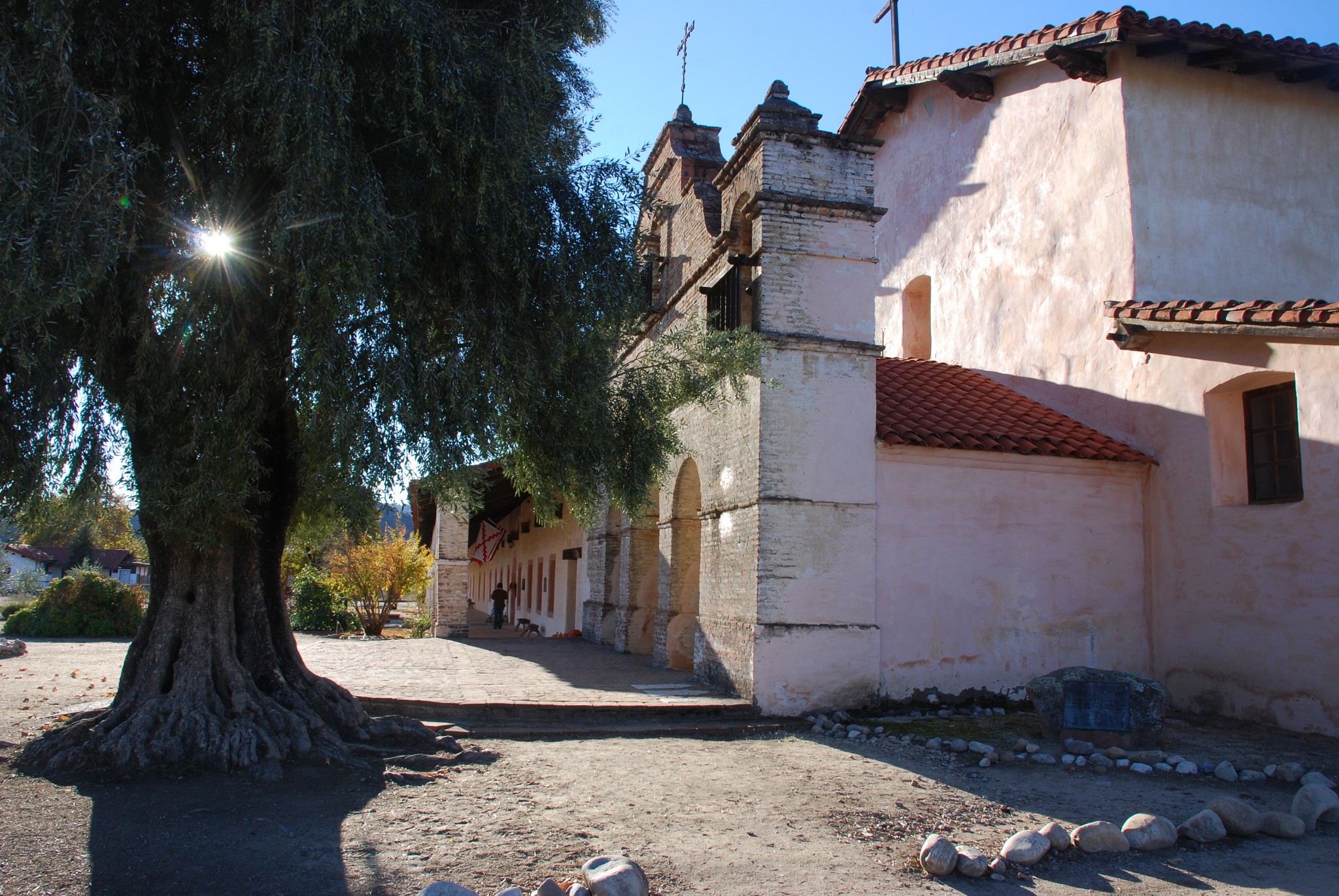 This week Road Trips with Tom visits Mission San Antonio de Padua – the most remote and little-visited of California’s 21 Spanish missions.  Have you been there?  I didn’t think so.  Most people don’t even know about this gem of a mission.

Mission San Antonio is in Monterey County, many miles from the nearest town.  It’s one of my two favorite missions.  The other is San Juan Capistrano, which is just off Interstate 5 in Orange County. Capistrano has an Amtrak/Metrolink station just a few blocks away and some nice cafes close by.  With its handsome buildings and beautiful garden, Capistrano is a great place for a peaceful stroll.  That is, until fleets of school buses arrive and disgorge hundreds of fourth graders, shattering any sense of solitude and reflection that existed earlier.  (Fourth graders in California’s public schools study the missions; most have to build models of one.)

Typically, California missions, like Capistrano, are in the middle of the cities that grew up around them.  San Antonio de Padua, in contrast, is in the middle of nowhere.  The setting looks pretty much like it did in 1771, when Fr. Junipero Serra (now Saint Serra) founded California’s third mission here.  School groups rarely come here.  It’s just too remote.

San Antonio is in an oak-dotted valley hemmed in by hills on the east and the Santa Lucia Mountains on the west.  No town grew up here, because the land isn’t public.  It was originally part of the Hearst Ranch, then was taken over by the U.S. Army as a training site during World War II.  The mission has an 80-acre site within the still-active Hunter-Liggett Military Reservation.

The setting, as a result, is quiet and peaceful . . . with the exception of occasional artillery fire.  The base may be officially active, but it didn’t look that way when I visited in late July.

The mission church you see today is the third on the site.  It was completed in 1815.  At San Antonio, as with California’s other missions, the padres planted corn and wheat, tended vineyards, and raised cattle and sheep.  It had a forge, tanning shop, weaving shop and other industries.  The Indian population was never large; its zenith was about 2,000, but was usually much smaller.

When Mexico won its independence from Spain, the missions were secularized and put up for auction.  Nobody bid on San Antonio.  Eventually, it was returned to the Catholic Church, and today it’s managed by the Monterey Diocese.

Because of its remote location, visiting Mission San Antonio requires some commitment.  It’s not a day trip from any major urban areas.  It’s 284 miles from Los Angeles and 175 from San Francisco.  Weekend visits are possible, although it’s a slog to the nearest accommodations.  Is it worth it?  I think so.  No other mission gives you a more authentic look at its purpose and workings.  It can be combined with a visit to the wine country around Paso Robles or to Pinnacles National Park.

The mission is open 10 to 4 daily.  Admission is $5 for adults and $3 for kids.  Currently, it’s undergoing restoration – an earthquake retrofit to bring it up to State of California standards.  According to its website, the mission is in desperate need of funds to finance the work and faces closure if the retrofit isn’t completed.

The Catholic Church can’t afford to save this historic gem?  Yeah, right.

The construction is ongoing.  The museum is closed, as is the exterior walkway, but visitors can stroll through the courtyard, garden and church.  Allow about 1 ½ hours.  For details, visit the mission’s website — www.missionsanantonio.net.

Logistics for the mission

The best times to visit are spring and fall.  Summer days can get very hot here; it was 102 degrees during my July visit.  Access is via US 101.  If you’re southbound, take Exit 283 at King City (Jolon Road), travel south on County Road G14 for 19 miles, then turn right on Mission Road and go 6 more miles.  Northbound travelers should take Exit 252 at a point 21 miles north of Paso Robles, then motor west on County Road G18.  Go 26 miles to Mission Road, turn left, and drive another 6 miles.

There’s a very cool back way in for drivers who don’t mind a narrow, winding road with steep drop-offs.  It’s the Nacimiento-Fergusson Road, which leaves the Big Sur coast at a point 35 miles north of Hearst Castle, then heads 24.5 miles across the Santa Lucia Mountains to Mission Road.  A left turn there leads you another mile to the mission.  It’s paved the entire distance.  If you’re a motorcycle rider, you’ve probably heard of this road; it’s considered one of California’s best motorcycle routes.  The Nacimiento Road lets you combine a visit to the mission with a stop at Hearst Castle or the elephant seal rookery at Piedras Blancas.

The nearest motels are in King City 25 miles and Paso Robles (53 miles).  If you’re camping, there are two Forest Service campgrounds (Nacimiento and Ponderosa) along the Nacimiento-Fergusson Road.

Thanks for visiting Road Trips with Tom.  Please join me on October 2 as we head to Badlands National Park in South Dakota.

This week’s road trip takes us to Fort Scott END_OF_DOCUMENT_TOKEN_TO_BE_REPLACED

Carhenge isn’t the end of the world . . . END_OF_DOCUMENT_TOKEN_TO_BE_REPLACED

Welcome to Benefit Street – the most impressive neighborhood of END_OF_DOCUMENT_TOKEN_TO_BE_REPLACED