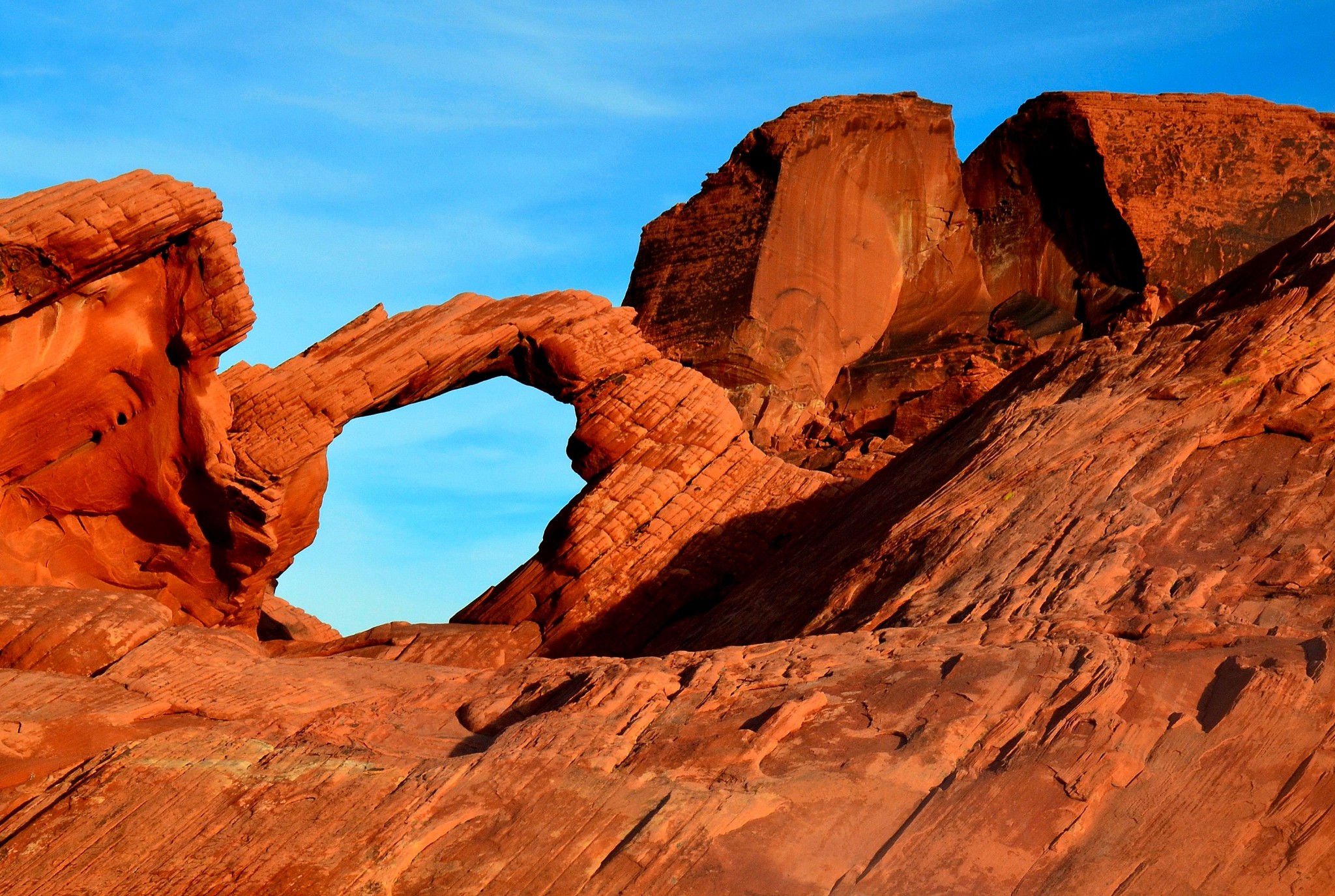 Our series of posts under the heading “The Road Less Traveled” spotlights out-of-the-way and little-known destinations that most people have never heard of – places like Carhenge.  Here, we’re breaking the mold by focusing on a destination that’s just off a major interstate highway and an hour’s drive from one of the country’s most visited cities – Las Vegas.  Yet it’s surprisingly little-known to people outside southern Nevada.

Valley of Fire attracts about 300,000 visitors per year, but most are Las Vegas locals taking weekend excursions.  You’ll see relatively few people on a weekday.  People visiting Las Vegas are typically more interested in red chips than red rocks; if they take an excursion out of town, it will invariably be to Hoover Dam.  The best times to visit are spring and fall.  I’ve also had good luck in winter.  But forget summer, unless you want to fry your tooshie.

Be sure to check out the exhibits at the visitor center, which is open 8-4:30.  Next, turn onto the White Dome Road, which branches off the main park road at the visitor center.  Take the short walk to the Mouse’s Tank historic site, stop at the Rainbow Vista viewpoint, then take the short trail at the end of the road.  If you’re a photographer like me, you’ll get the best light in the late afternoon.  The mix of colors in the rocks near the White Domes Trail is really amazing.  Also, don’t miss Elephant Rock, located near the East Entrance Station.  You’re supposed to park in the lot down the road, then hike back to the formation.  The alternative — and this is only for miscreants (wink, wink) — is to stop in the middle of the road and shoot your photo out your window.  There are a couple of nice picnic areas in the park, but the only nearby place to buy food is the convenience store at I-15, Exit 75.  Otherwise, BYO lunch with you from Las Vegas.

To get there, drive north from Vegas on I-15 to Exit 75, then head east about a dozen miles.  The entrance fee is $10. The entrance station is often unstaffed, meaning you’ll need to put $10 in cash into a fee envelope.  The alternative is to take Lake Mead Parkway north from I-515, then turn left onto Northshore Road.  It’s a longer route but more scenic.  The National Park Service has just installed fee stations at either end of this road; the fee is $10. When you leave the park, the fastest route to Las Vegas is to hang a U and go back the way you came on I-15.  You can turn right and take Northshore Road to Lake Mead Parkway; this route is longer and will cost you $10, but it’s a prettier drive.  If you’re headed to Utah, turn left at the east entrance station; SR 169 will take you through Overton to I-15.  (The Lost City pueblo museum in Overton is supposed to be worthwhile; I’ve never stopped there.)

Carhenge isn’t the end of the world . . . END_OF_DOCUMENT_TOKEN_TO_BE_REPLACED

Road trip destinations and stopovers, like beauty, are in the END_OF_DOCUMENT_TOKEN_TO_BE_REPLACED

This week Road trips with Tom is primed for adventure, END_OF_DOCUMENT_TOKEN_TO_BE_REPLACED

Looking out my window as I write this, I can END_OF_DOCUMENT_TOKEN_TO_BE_REPLACED