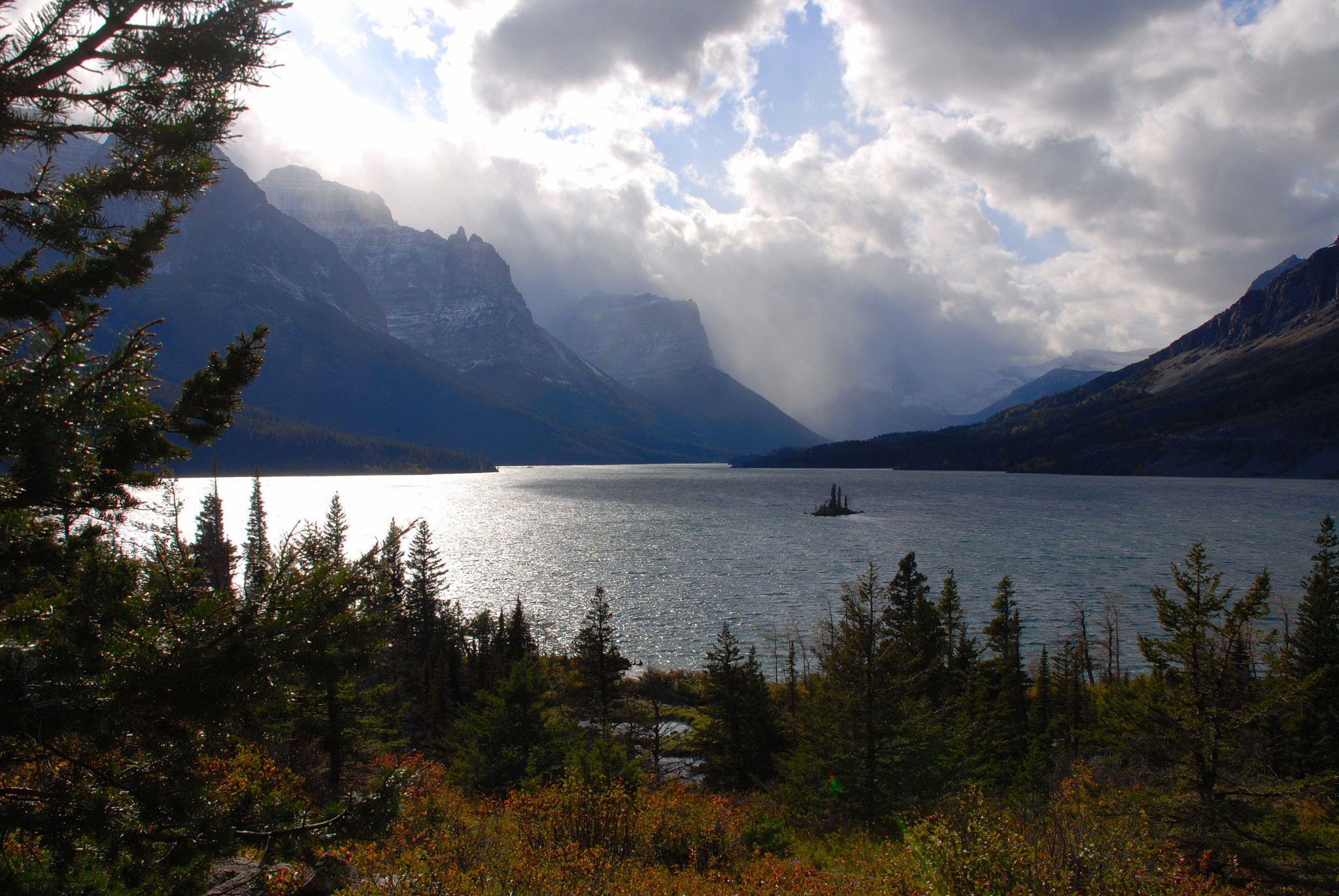 This post continues our list of North America’s most scenic highways.  In this issue you’ll find Scenic Highways 16 through 20.  We’ll present five more in a few weeks.  Each instalment will be archived so you can come back to it whenever you want.  Please use the comments button to share your thoughts on the highways we’ve included and perhaps those we’ve omitted.

We’ll start with a highway a lot of people think is the most beautiful drive in the United States.  You’ll have to brave the crowds to try it, but it may be worth it.

Distance:  45 miles; driving time at least two hours.  Yes, it draws hordes of people in the summer.  Yes, it can be a traffic jam.  Yes, it’s a long drive from any major metro area.  But, dad gummit, this is one awesome road – maybe the best mountain scenery the U.S. has to offer that’s accessible by road.  The Going-to-the-Sun Highway connects West Glacier with St. Mary, crossing the continental divide along the way.  It also connects two gorgeous glacial lakes – Lake McDonald and Upper St. Mary Lake.  (Both lakes are pictured on this page.)  The views as you approach Logan Pass from either direction are awesome.  Along the way you’ll find plenty of hiking trails of varying lengths.  Wildlife is supposedly abundant, but the critters apparently had the day off when I’ve visited Glacier.  Fall foliage is generally at peak the last week of September and first week of October.  Visitor centers are at either end of the road, plus up top at Logan Pass (summer only).

If you’re flying in, you’ll find flights to nearby Kalispell from Seattle and Salt Lake City.  The long-established park lodges close in early September, but there are ample accommodations in nearby towns, especially on the west side of the park.  My favorite overnight stop is Whitefish, Montana.

Your enjoyment of Glacier National Park and this scenic route will be tremendously affected by when you come.  September is the ideal month.  The season is short.  In 2015 the road didn’t open until June 20 due to prodigious amounts of snow.  Later in 2015, a section up top will close for construction on September 20, although you’ll be able to drive to Logan Pass from the west entrance.  If you must come in summer, I recommend you also also head north to Waterton Lakes National Park in Alberta.  The scenery is very similar, but the visitation isn’t.

Distance:  140 miles.  Driving time:  4-5 hours, plus stops.  This northern section of Highway One is my favorite California coastal drive.  While it lacks the intense climbs, dips and twisties of the Big Sur section (it does have some of that), it makes up for it in a variety of attractions, both natural and man-made.  Along or near SR 1 are an amazing 15 state parks that include rocky coastlines, primo diving spots, botanical preserves, historical sites and redwood forests.  You could easily spend the better part of a week here.

If you’re flying in, use San Francisco or Oakland.  Accommodations and campgrounds are plentiful along the route.  The largest town with the best choice of services is Fort Bragg.  To get to Bodega Bay from San Francisco, cross the Golden Gate Bridge, exit at SR 1, and just stay on it past Point Reyes National Seashore.  Point Reyes is an interesting destination worthy of your time.  Continue from Bodega Bay to Sonoma Coast State Beach, with its spectacular rocky headlands.  You then cross the mouth of the Russian River to Jenner.  After a steep, winding climb, you arrive at Fort Ross, an old Russian fur trading post dating to the early 1800s.  It’s now restored and operated as a state historic park.  Worth a stop.

Not far beyond Fort Ross is The Sea Ranch, a private development of very expensive oceanview homes designed to look like battered beach shacks.  It’s not for everyone’s taste, although I rather like it.  A bit farther north is Mendocino, one of California’s most attractive small towns.  A few years ago, it doubled as “Cabot Cove, Maine,” in the TV series Murder, She Wrote.  If you’re looking for a romantic (and expensive) inn or B&B, this is where you’ll find it.  Let me know if you run into Jessica Fletcher.  Next is Fort Bragg, with its billiard pocket boat harbor.  Also in Fort Bragg is the famous “Skunk” train excursion.  Don’t miss it if you’re traveling with kids or senior citizens.  I enjoyed it, too.  Oops, I almost forgot:  I am a senior citizen now. Beyond Fort Bragg is a spectacular section of rugged coastline near Westport.

Past Westport, the road veers inland and makes what seems like a thousand corkscrew turns to Leggett.  RVers should avoid that stretch by returning to Fort Bragg, then using SR 20 to connect with US 101 at Willits.

This remarkable road runs 575 miles from Front Royal, Virginia, to Cherokee, North Carolina.  The portion named Skyline Drive is within Shenandoah National Park; the Blue Ridge Parkway begins where the park ends.  There are no towns, no stoplights, a 45 mph (or slower) speed limit, gentle curves and spectacular viewpoints at frequent intervals.  It’s a great drive for all types of vehicles, including bicycles. Spring/summer wildflowers abound, and fall foliage is even better.  There’s a $20 per vehicle entrance fee for Shenandoah ($15 for motorcycles), but the Blue Ridge Parkway is free.  Accommodations are in nearby towns.  There are a few campgrounds accessible directly from the route.  If you’re flying in, head for Washington Dulles, only an hour or so from the entrance to Shenandoah National Park.  The nearest major airport for the parkway’s far southern section is Atlanta, although a few flights land in Roanoke, Va., and Asheville, N.C.

The roads are open all year, but winter conditions may cause temporary closures.  Summer and weekends can be mobbed, especially near the northern end.  Pick a sunny weekday in spring or fall, and you’ll think you’ve died and gone to heaven.  The least crowded portion is from Roanoke south to the turnoff for Boone, N.C.

Nobody gets on at one end of this route and drives all the way to the other end.  What I recommend (and what most people do) is to drive one section for a couple of hours, then come back on another trip for more.  If you live in the Baltimore-Washington area or elsewhere in Virginia or North Carolina, there are endless possibilities for one-day excursions.  The southern end of the Blue Ridge Parkway is less than a mile from the entrance gate for Great Smoky Mountains National Park, so it’s easy to combine the two.  There are other attractions along the way, such as Mabry Mill, Mt. Mitchell, Grandfather Mountain and Linville Gorge.  The southern end is the highest, most rugged part of the parkway.  Check the parkway’s website for details.

Let’s switch gears here and focus on a scenic route that’s a lot closer to home for many of you.  In fact, it can also serve as a nice day trip out of Los Angeles or San Diego.  Distance is about 80 miles, and driving time is about 2 hours.  This has always been my favorite day trip.  It’s about a 200-mile drive from San Diego, 250 miles from Orange County or 300 miles from L.A.

What I like about this route is it gives you a glimpse of what Southern California looked like before we stole it from Mexico.  You won’t find housing tracts, malls or freeways out here — just a good two-lane highway that’s suitable for all vehicles;  it’s an especially nice motorcycle route.   It climbs, dips and winds past hills, mountains, chaparral, grasslands and stands of California valley oaks.  The drive can be made pretty much any time of year, although April and May are probably ideal.  If you can, drive SR 79 on a weekday.  Weekends can get crowded with off-roaders headed to the desert and antique shoppers headed to the little town of Julian.

Your starting point is Temecula, midway between LA and San Diego on Interstate 15.  Temecula is the home of people who take on monster commutes in return for affordable housing.  Nearby is the huge Pechanga Casino.  From 1-15, take Exit 58 and drive east.  You’ll quickly leave the cookie cutter housing developments and the traffic behind.  After 35 miles or so of rocky, oak-covered hills, you’ll enter a vast, grassy valley and soon arrive in the hamlet of Warner Springs.  To the west is Mt. Palomar, with its famous observatory, and Lake Henshaw, which sometimes has actual water in it.  (Not this year, of course.)

At the junction with westbound SR 78, you’ll pass Mission Santa Ysabel.  You’ll also pass the Julian Pie Co.  Julian is orchard country, and the company does a tremendous business selling fresh pies.  A great test of wills comes when you slow your vehicle, wind the windows down, and smell those fresh fruit pies.   Julian itself is at an elevation of about 4,000 feet and is San Diego County’s mountain town.  It’s a fun place to stroll, shop and have lunch.  Continue south from Julian, and you’ll reach Interstate 8.  San Diego is 40 miles west.

I sometimes use this route as a scenic alternate when driving to southern Arizona.  From Julian, SR 78 eastbound drops down to Anza-Borrego Desert State Park.  There, Highway S2 runs southeastward through interesting desert scenery to I-8 near the Mexican border.  Yuma is about 1 ½ hours east.

Mount Rushmore is on everyone’s bucket list.  And, in fact, it’s something every American should see.  Once.  You begin your visit by entering a huge parking structure, where you’ll pay $11 to park your vehicle.  You then walk down a long promenade, take an elevator ride to the visitor center/observation area, and gawk at Mt. Rushmore.  That’s pretty much it.  There are no trails or other activities, other than the obligatory souvenir shop.  You’ll be ready to leave in less time than it took to walk from the parking structure.  Oh, and let’s not forget:  In summer, the memorial is mobbed.  Best coping mechanism is to arrive early.

The cure for any disappointment a visitor might feel is the Peter Norbeck Scenic Byway, which begins just down the road in the tacky tourist trap town of Keystone.  It loops through some of the Black Hills’ best scenery and brings you back to Mt. Rushmore.  There are two loops.  I’ll focus on the shorter of the two, which takes about three hours to drive.  The byway begins as US 16A, or Iron Mountain Road.  This was a remarkable feat of engineering when built in 1933.  It climbs and twists around “pigtail” loops and three tunnels.  After the first tunnel, park and look back:  The tunnel perfectly frames the faces on Mt. Rushmore.  Farther on, the road enters Custer State Park, one of the best places in the United States to view wildlife.  Bison, elk and bighorn sheep are abundant; you’re almost sure to see some of them.

Turn right at the junction with SR 87, also known as the Needles Highway.  This road winds around impressive granite pinnacles and past Sylvan Lake.  From here, you can turn south to visit more of Custer State Park or continue north and east back to Mount Rushmore.  TIP:  Just before arriving back at Mt. Rushmore on SR 244, look to your left for a profile view of George Washington.  There are parking spaces nearby.  You’ll find a good map of the Norbeck Byway at http://www.fhwa.dot.gov/byways/byways/2459/maps

Other nearby attractions include the Crazy Horse Memorial, Custer State Park’s Wildlife Loop road, Jewel Cave National Monument and Wind Cave National Park.  The old west town of Deadwood has been spiffed up and outfitted with casino gambling.  Accommodations are in Custer, Keystone and Rapid City.  Commercial flights land at Rapid City.

Welcome to Benefit Street – the most impressive neighborhood of END_OF_DOCUMENT_TOKEN_TO_BE_REPLACED

This week, Road Trips with Tom steams down the mighty END_OF_DOCUMENT_TOKEN_TO_BE_REPLACED