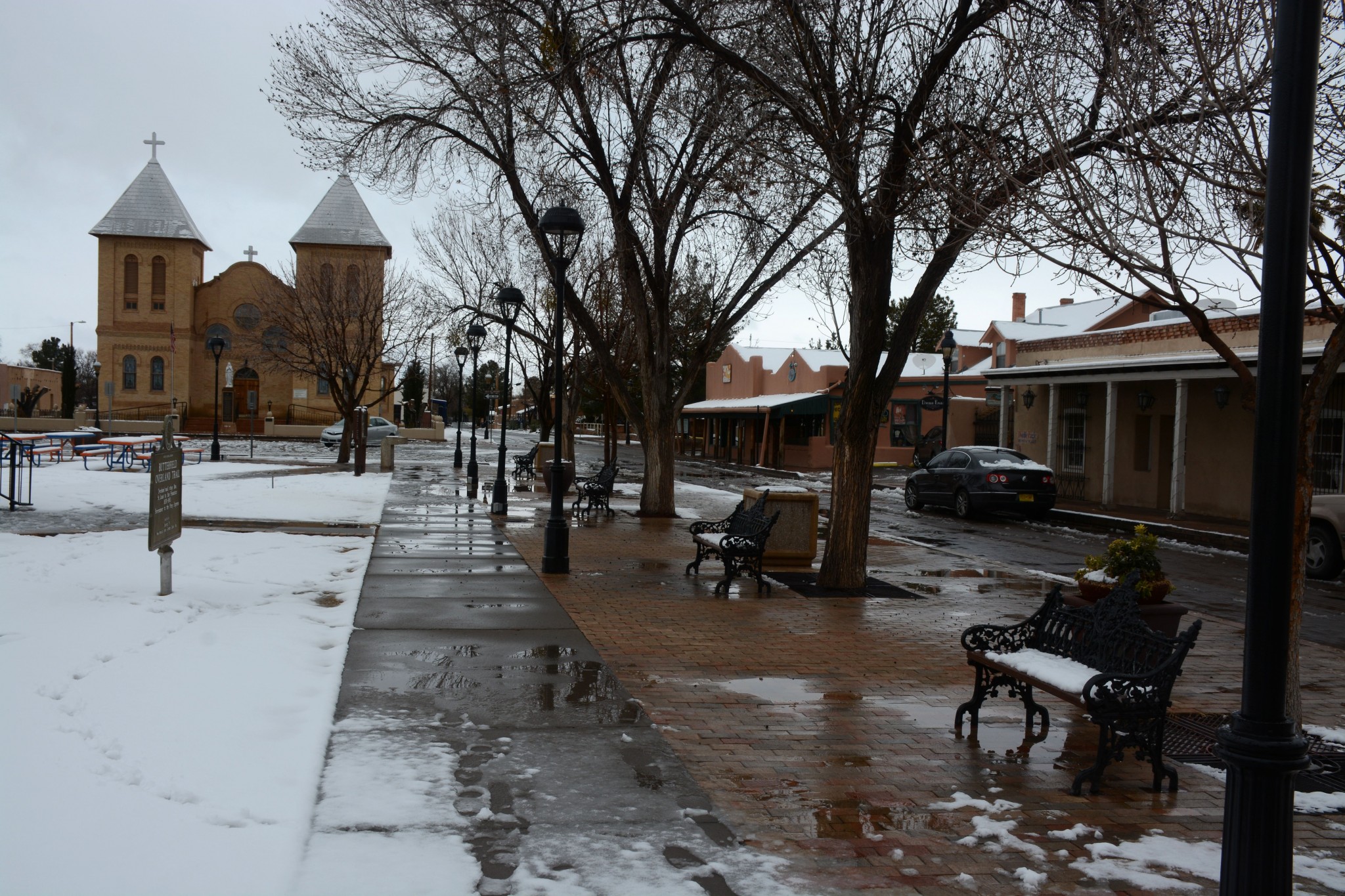 This week Road Trips with Tom takes Exit 140 from Interstate 10 and visits the historic village of Mesilla, New Mexico.

Mesilla isn’t just in New Mexico.  In many ways, it is New Mexico.  If you were to be magically transported to the village plaza, you’d know you were in New Mexico almost immediately.  Where else in the United States would you find a spacious plaza anchored by a magnificent church and surrounded by adobe buildings with wooden vigas?

This isn’t a tourist attraction wearing historical getup – it’s an authentic 19th-century village with a bucket load of genuine appeal.  It’s like Santa Fe on a smaller scale without the state capitol, upmarket aura and high prices.  Mesilla’s entire historic district is a National Historic Landmark, but a visit here won’t stretch your credit card limit.

What you see here is a story that’s been repeated time after time in the West.  Prosperity and growth are followed by a big downturn, resulting in a loss of economic sustenance and population.  What’s left is the shell of what was and just enough of an economic engine to avoid extinction and allow the historic infrastructure to survive.  In Mesilla, as in other places we’ve highlighted in this blog, preservation has transformed “old” into “charming.”

Old Mesilla is a great place to spend a couple of hours.  Nothing could be easier, since it’s just off the interstate, 4 miles from Las Cruces and 40 from El Paso. What’s there to do?  Stroll.  Shop.  Eat.  All are pleasurable here.  For a preview, watch the 8-minute video at www.youtube.com/watch?v=93fGzSZzhXE.

To get there, take I-10 to Exit 140, then head south on Avenida de Mesilla (SR 28).  After about a mile, turn right at Calle de Santiago.  There’s a sign (for Historic Mesilla Plaza) at the corner.  Drive two blocks, and you’re there.  The plaza is dominated by the graceful Basilica of St. Albino, built in 1906, replacing an earlier church built in 1852.  Traffic moves counterclockwise around the plaza.  Parking is usually okay except during festivals and other special events.  Most of the best shops and restaurants are within walking distance.

You might want to begin at the Old Mesilla Visitor Center, located in the town hall at 2231 Avenida de Mesilla.  The town’s web site, which you’ll find at www.oldmesilla.org, has lots of good information and is worth checking out.  You might also want to get a copy of the walking tour guide sold at Bowlin’s book shop on the plaza.

Now, for the history lesson.  The lower Rio Grande valley was a traditional homeland for native Americans, who established pueblos in the area.  The first European party to pass through here was the Coronado expedition in 1540.  Coronado was looking for gold, didn’t find any, and left.  Not until 1598 did another Spanish expedition under the leadership of Juan de Onate head up the valley to Santa Fe, 250 miles north of Mesilla.  That opened up what became known as El Camino Real as a travel route and cemented Spain’s ownership claim.

Mesilla itself wasn’t settled until 1848.  This was two years after the Treaty of Guadalupe Hidalgo ended hostilities between the United States and Mexico, which won its independence from Spain in 1821.  Mesilla became an American town, at least in theory.  Many settlers moved into the area, but Apache raids became a problem.  In response, the U.S. army established a fort just upstream.  Mesilla became prosperous supplying the garrison.

As an American town, Mesilla soon found itself on a strip of land claimed by both the United States and Mexico.  It seems a mistake was made establishing the boundary, and Mesilla wasn’t in the United States after all.  This issue was solved in 1854 by the Gadsden Purchase (see map).  Mesilla was the most important town in the newly purchased parcel, and the U.S. flag was officially raised in Mesilla Plaza.

Mesilla continued to prosper, not missing much of a beat when Confederate troops marched into the plaza and took control in 1861.  For eight months, Mesilla was the capital of New Mexico and Arizona territories.  However, it seems that the Confederates had outdistanced their supply lines and had to withdraw.

The defining factor in Mesilla’s history came in 1881, when the railroad bypassed the town in favor of nearby Las Cruces.  The wound was apparently self-inflicted; Mesilla’s town fathers didn’t want the railroad invading their space.  That wound was nearly fatal.  Businesses, population and county government fled to Las Cruces, which became the state’s second-largest city.  Mesilla, on the other hand, settled down to life as the sleepy New Mexican village you see today.

In Mesilla, as in most of the state, one of the real treats for visitors is the food.  New Mexico has its own distinctive cuisine that’s similar to the Mexican food we know and love in California, but different.  New Mexican food is based on the chile (note spelling) – the state vegetable.  Chile is either green or red, depending on when it’s harvested.  You may be asked “red or green?” when ordering in a New Mexican restaurant.  If you want to try both, ask for “Christmas.”

Wikipedia has a very good post on New Mexican cuisine.  Go to www.en.wikipedia.org/wiki/New_Mexican_cuisine.

My favorite New Mexican dish is carne adovada – chunks of pork in a fiery red sauce that will grow hair on the bottoms of your feet.  It’s sometimes stuffed into sopapillas – puffed bread pockets.  Sopapillas are also sometimes served warm with honey — yum!  Bottom line:  Don’t miss the opportunity to eat New Mexican food when you visit Old Mesilla.  This cuisine is pretty much restricted to the Land of Enchantment, although you’ll find it throughout the state.

Special:  Here’s a recipe for carne adovada, courtesy of The Food Network:  www.foodnetwork.com/recipes/carne-adovada-recipe2.  If this link doesn’t appear “live” on your screen, simply paste it into your browser.

On my most recent trip last month, I ate at La Posta just off the plaza.  La Posta is where the tourists go, and I wanted to show it to you in this post.  It’s in an 1840s building that once housed a freight and passenger service co-owned by Roy Bean.  Yes, that Roy Bean – the judge portrayed on film by Paul Newman.  The restaurant was first opened in 1939.

I enjoyed my dinner there.  Prices were reasonable, and the service was good.  Had I not wanted to feature it here, I would have eaten at a place on Avenida de Mesilla named Andele (ON-de-lay), which has the third-best carne adovada in the state and a killer posole.  (The two best places for carne adovada are El Rancho de Chimayo in the mountains near Taos and the Shed in Santa Fe.)

Want to spend the night?  You’ll find a plethora of places in nearby Las Cruces, including a group of hotels near I-10 Exit 140.  The nearest commercial airport is in El Paso.

Thanks for visiting Road Trips with Tom.  Next week, we’ll take you on a mile-by-mile journey along South Dakota’s most scenic highway – the Peter Norbeck Byway in the Black Hills.

Welcome to Benefit Street – the most impressive neighborhood of END_OF_DOCUMENT_TOKEN_TO_BE_REPLACED

This week, Road Trips with Tom steams down the mighty END_OF_DOCUMENT_TOKEN_TO_BE_REPLACED