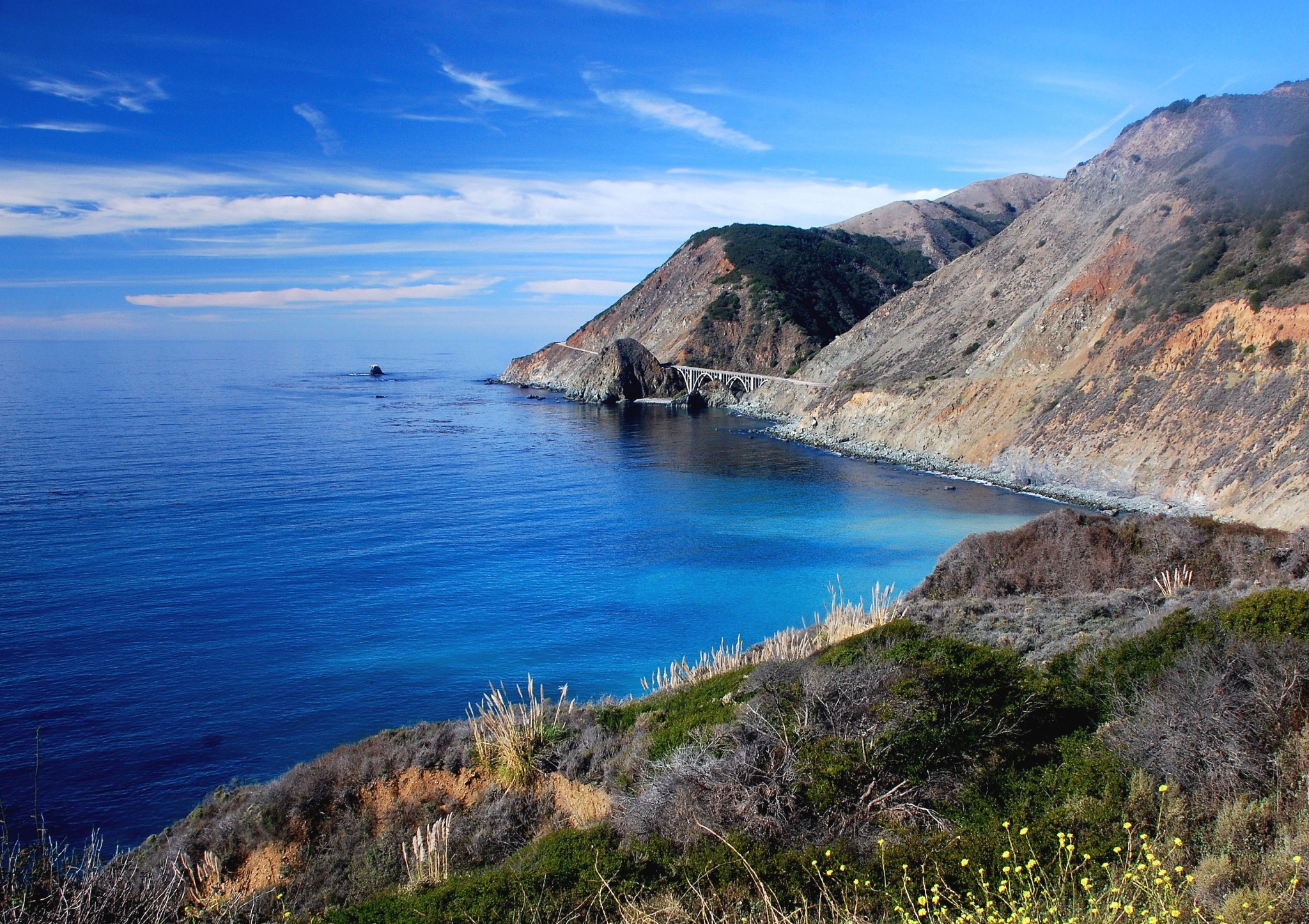 What are the most scenic highways in North America?  It depends on whom you ask.  After all, scenery is a subjective thing.  For example, people who love the desert think it’s beautiful.  Those who don’t think those who do are crazy.

The list I’m going to share with you in this and the next few issues of Road Trips with Tom is my list – 25 of the roads I most enjoy driving.  I’ve driven each of these routes at least once.  For each, I’ll include just enough information so you can pinpoint the location and perhaps add to your road trip bucket list.  The content is divided into five posts, each of which covers five scenic drives.

In this post you’ll find Scenic Highways 1 through 5.  Scenic Highways #2 was inadvertently posted before this; look for the link.  We’ll present the third scenic highways post in two or three weeks.  Each instalment will be archived so you can come back to it whenever you want.  Please use the comments button to share your thoughts on the highways we’ve included and perhaps those we’ve omitted.

SPECIAL TIP:  Five miles beyond Hearst Castle is Piedras Blancas Lighthouse.  Just south of there, watch for a parking area on the ocean side of the highway.  This is the best place to view rare elephant seals, especially in December and January.  Unlike the more famous Ano Nuevo Beach near Half Moon Bay, you don’t need reservations and a tour ticket.  Just walk to the edge of the cliff and look down.  Morning is the best time.

NOTE:  I prefer the northern segment of SR 1in Sonoma and Mendocino Counties.  It has comparable scenery, more civilization, but a fraction of the traffic.  I’ll provide details on that segment in a future issue.

From here, continue east, enjoying the waterfalls and viewpoints along the way.  Eventually, you’ll come to Multnomah Falls, at 620 feet Oregon’s highest.  This is where all the people are.  To continue east, don’t get on the freeway here; you’ll want to visit Horsetail Tails, a few miles farther east on the scenic highway.  It’s literally right next to the road, yet it’s rarely crowded.  You’ll find an onramp to I-84 east just beyond that.  Ainsworth State Park, just down the road a piece, is a great picnic spot.

TIP:  At Hood River, take SR 35 south a mile or two, then go left on East Side Road.  That takes you to Panorama Point, which overlooks the beautiful orchards of the Hood River Valley, with Mt. Hood in the distance.  You may have to trust me on this, because the mountain is rarely visible through the clouds.

The road is fine for cars, RVs and motorcycles.  You’ll find services in Ouray and Silverton.  There are plenty of turnouts for photographers.  Nearest airports are Denver and Albuquerque (both are a considerable distance).

Foliage displays happen on their own schedule – earlier one year and later the next.  For the San Juans, your best bet is to be there between September 25 and October 1.  Don’t worry about days of the week.  This is too far from Denver for traffic to spike on weekends.  Traffic never gets heavy, but you’ll find lots of tripod-toting photographers in the best shooting locations.  Some of these people have photo equipment that cost more than my house.

You’ll want to drive from north to south.  The sun is in the south sky in October, and foliage looks best when it’s backlit.  Spend the night in the funky old mining town of Ouray.  Start your day early by detouring west a few miles on SR 62 to the Dallas Divide.  You’ll probably find 50 other photographers there waiting to capture the dawn on 14,110-foot Mt. Sneffels. Back on US 550, as you pass Ouray, you’ll start to climb.  And climb.  At Red Mountain, you’ll see an entire mountainside of golden aspens, reflected in a mining pond.  The shore of the pond is tripod city.  Of course, western fall foliage is mostly yellow – aspens on the high slopes and cottonwoods in the valley bottoms.  Both are spectacular.  Fall isn’t the only time to drive this road.  It’s plowed in winter, and looks great any time of year.

While you’re in the area, here are a few options.  One is the highly popular Silverton train out of Durango.  Another:  Take a jeep tour out of Ouray to some of the old mines and ghost towns of the San Juans.  Third, Mesa Verde National Park is an hour to the west of Durango off US 160.  And fourth, the canyons and mesas of southeastern Utah are just a few hours away.

Welcome to Benefit Street – the most impressive neighborhood of END_OF_DOCUMENT_TOKEN_TO_BE_REPLACED

This week, Road Trips with Tom steams down the mighty END_OF_DOCUMENT_TOKEN_TO_BE_REPLACED