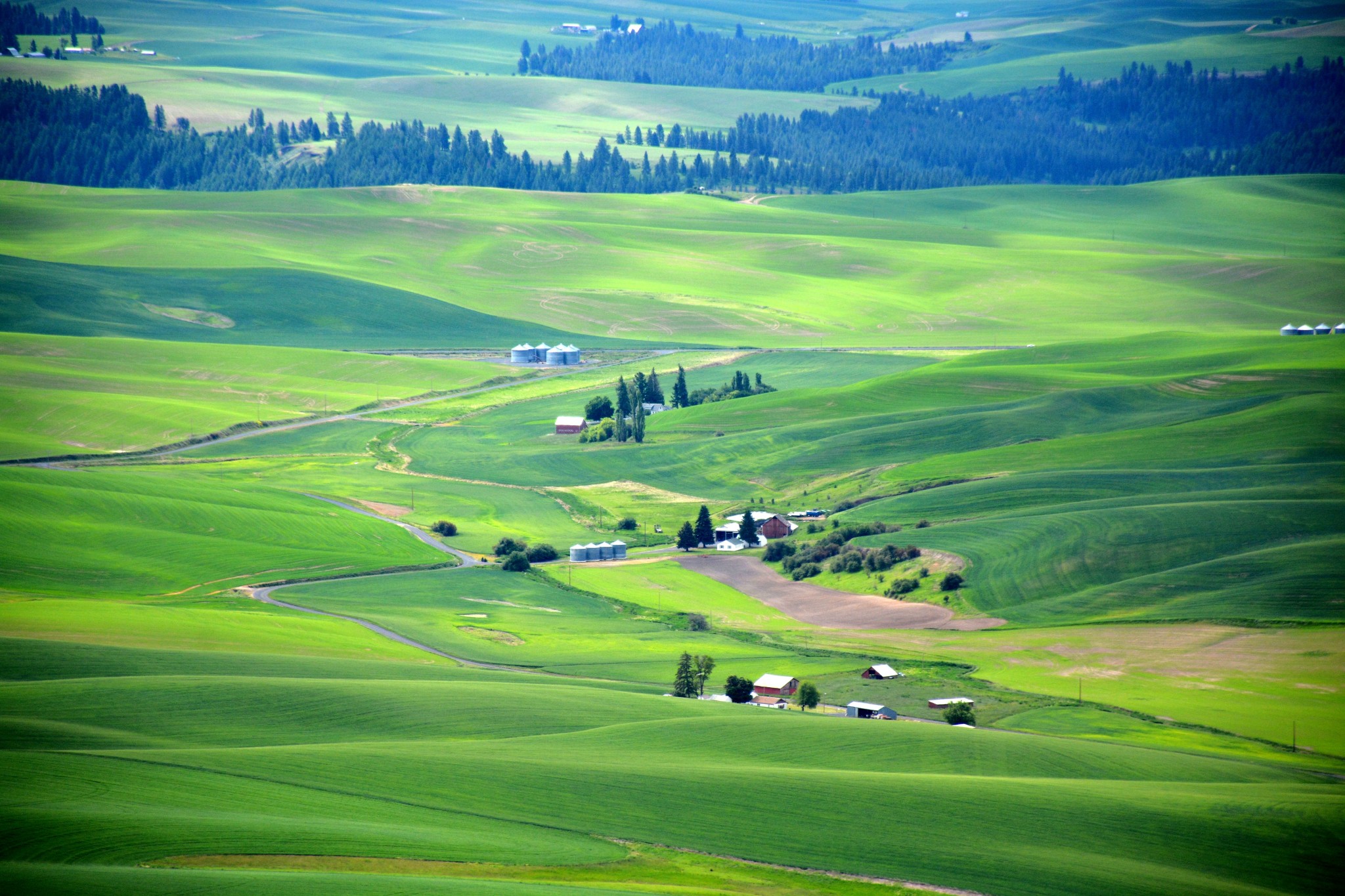 How’s this for a reason for a road trip?  I saw a photo of Washington’s Palouse region taken in the spring, and I thought “Wow!  I have to go there!”  So I did.  I flew round trip to Spokane from LAX on Delta – the only direct flight between the cities.  As is common these days, the rental car cost more than the plane ticket.

The Palouse region begins about 20 miles south of Spokane and extends southward along the Idaho border to the Snake River.  This is considered the primo wheat-growing area in the country, if not the world.  It’s certainly the best-looking.  In early June, when I was there, the fields were the most intense green you can imagine.  In summer and fall, they turn gold.  To tour the area, I recommend you drive SR 27 from Spokane to Pullman, but don’t hesitate to mosey down some of the back roads.

Be sure to stop at Steptoe Butte State Park for a 360-degree view of the Palouse (pictured).  You’ll find lodging in the college towns of Pullman, Wash., and Moscow, Idaho.  Summary:  Worth a two-day detour from your Pacific Northwest road trip.  This is off the beaten path, so you won’t be in a crowd.

Next, on to Canada, eh?  The border is about 2½ hours north of Spokane.  My first objective was Fort Steele Heritage Town near Cranbrook, British Columbia.  The quickest way there from Spokane is via US 2 to Sandpoint, then north on US 95 up the Idaho Panhandle to the border.  Sandpoint is a very cool, somewhat upscale resort town on the shore of Lake Pend Oreille (ponderay).  The route becomes BC 95 in Canada and is joined by BC 3, the Crowsnest Highway.  This is mostly forested mountains with lakes along the way.  Moyie Lake is especially nice.  Cranbrook is the largest city in the area and has ample accommodations.  That’s where I stayed.  Campgrounds are abundant as well.  Fort Steele is about 15
minutes from Cranbrook.

This is a historic re-creation of a frontier gold mining town.  It’s very well done, with restored and reconstructed buildings and costumed interpreters.  Definitely worth a two-hour stop if you’re in the area.  If you have kids with you, you’ll thank me for suggesting this place.  If you’re headed to Banff, stay on 95, then take BC 93 through Kootenay National Park to Lake Louise.  It’s only a couple of hours.

My third objective was Waterton Lakes National Park, which is the Canadian cousin of Montana’s Glacier National Park.  The drive there from Cranbrook crosses the spine of the Canadian Rockies and is highly scenic.  Take Highway 3 through the gorgeous Elk Valley to Crowsnest Pass, once a major coal-mining area.  The small town of Fernie has as beautiful a setting as you could imagine.  The town is nothing special, but it does have a Tim Horton’s – the ubiquitous Canadian counterpart to Starbucks and a place to get coffee and very good baked goodies.  Once across the Alberta border, the road leaves the mountains.  At Pincher Creek, take Alberta 6 south about 30 miles to the national park.  The approach is spectacular.  The mountains rise almost vertically from the prairie.  I wonder if the ranchers who live along Highway 6 ever get tired of the view.  Nah!

Waterton has a town located on the shore of Upper Waterton Lake, surrounded by jagged mountains.  Standing sentinel as you approach the town is the grand old Prince of Wales Hotel, where a room will set you back $500 or so.  You’ll also find expensive accommodations and other services in the Waterton townsite.    Campgrounds are nearby.  I backtracked to Pincher Creek for the night and saved about 50 percent.  By all means take the pricey Waterton Lake cruise, which actually crosses into the United States, and drive the two scenic roads – the Akamina Parkway and Red Rock Canyon.  Hiking is terrific in the park.  The trail to Crypt Lake is considered Canada’s best hike, according to the narrator on the boat cruise.  You can easily drive to the U.S. border and Glacier National Park from here.  The park can be crowded on pleasant weekends and in summer, though it’s nothing like Glacier.  Verdict:  Worth 2-3 days of your time.  If you’re headed to Glacier National Park, take the side trip to Waterton.  Pictured:  Waterton Lake cruise.

The fabulous Going-to-the-Sun highway in Glacier National Park was still closed by snow, so I drove US 2 around the southern edge of the park.  The consolation prize was the drive on US 89/Montana SR 49, which is scenic to the max.  After an overnight in Kalispell, I continued on US 2 to Spokane for my flight home.

Welcome to Benefit Street – the most impressive neighborhood of END_OF_DOCUMENT_TOKEN_TO_BE_REPLACED

This week, Road Trips with Tom steams down the mighty END_OF_DOCUMENT_TOKEN_TO_BE_REPLACED