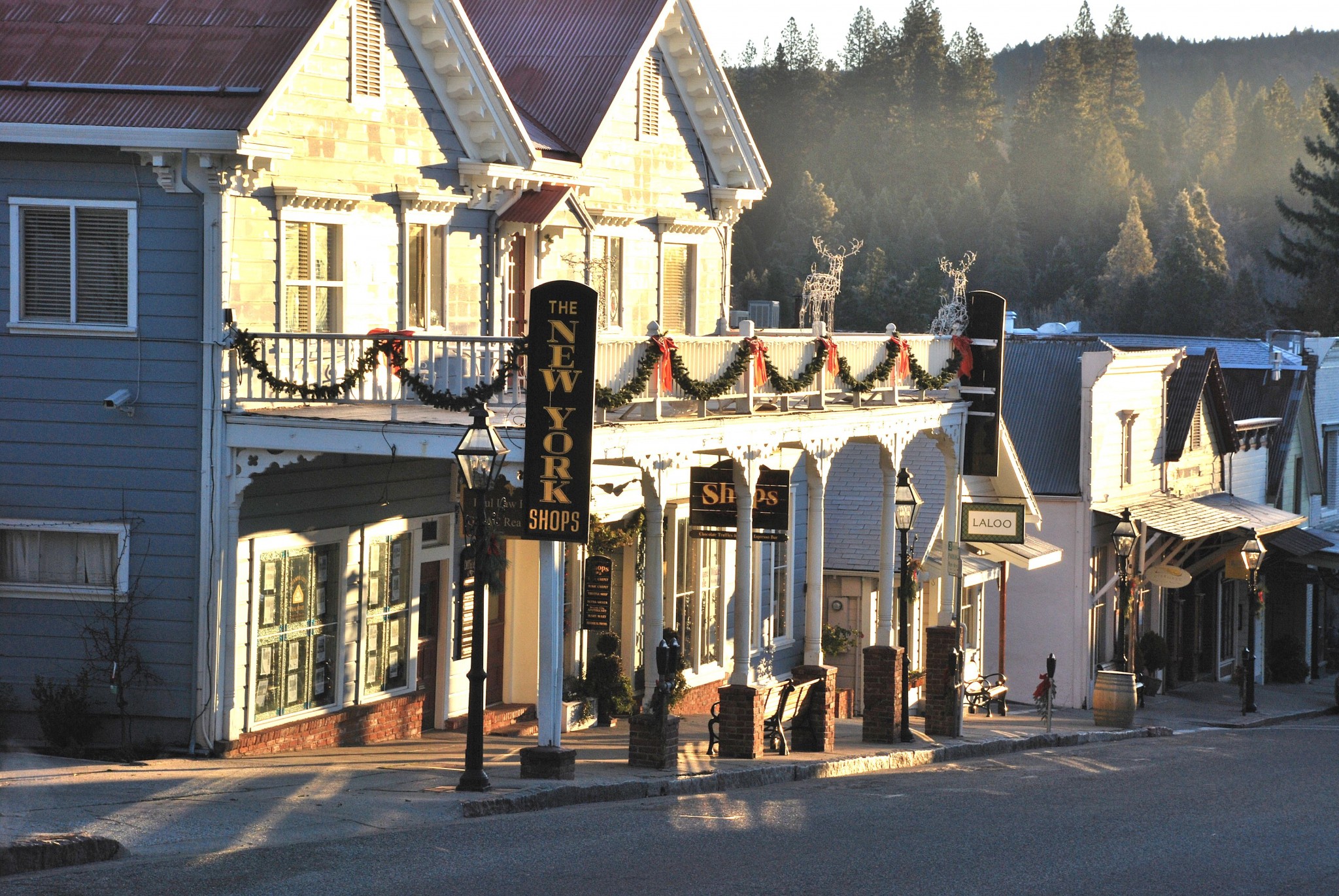 One of California’s favorite road trip destinations is the Mother Lode – scene of the great gold rush that in less than two years transformed California from a sleepy backwater into a U.S. state.  The Mother Lode region extends along the foothills of the Sierra Nevada from Mariposa in the south to Downieville in the north – a distance of about 180 miles.

There, you’ll find dozens of small, historic towns connected by SR 49; that number represents 1849, when the Gold Rush went into full swing.  In fact, the unusual shape of California’s state highway signs represents a miner’s shovel.

In this post, we’ll focus on my favorite Mother Lode town, Nevada City, located near the northern end of the diggins, not far from where James Marshall discovered gold in 1848.  Nevada City was founded the next year and quickly became one of the richest of the Gold Rush towns.

Most of the Mother Lode towns avoided death by combining continued mining with forestry and ranching.  Nevada City is north of the line separating oak-covered hills from forests.  In addition to continuing to mine for gold, it became a lumbering town.  It still is, to some extent.  More important to its economy, however, is tourism.  More so than other Mother Lode towns, Nevada City has an upscale aura.  What draws visitors is the town’s historic buildings, including 93 that are on the National Register of Historic Places.  In addition to the well-preserved downtown, you’ll find Victorian homes, plus lots of shops, galleries, inns and B&Bs.  No chain motels here.  Nevada City is also famous for its restaurants.  You can drop lots of money here, although there’s no charge to wander around the town.

A nearby attraction is Empire Mine State Historic Park.  The Empire Mine operated from 1850 to 1956 and extracted over 5.8 million ounces of gold.  You can visit the mineyard, view mining equipment, and learn how the gold was mined.  To get there, drive a few miles south on SR 49, exit at Empire St., and follow the signs.  Hours are  10-5 daily except major holidays.  Admission is $7 for adults and $3 for kids 6-16.  Tours of the cottage, mineyard, gardens and grounds are included in the admission fee.  It’s worth a couple of hours.

Nevada City is 60 miles from Sacramento via Interstate 80 and SR 49.  It’s also a convenient weekend destination for people from the San Francisco Bay Area.  That translates into weekend crowds, especially in summer.  A Nevada City road trip can easily be combined with a visit to Lake Tahoe.

Welcome to Benefit Street – the most impressive neighborhood of END_OF_DOCUMENT_TOKEN_TO_BE_REPLACED

This week, Road Trips with Tom steams down the mighty END_OF_DOCUMENT_TOKEN_TO_BE_REPLACED