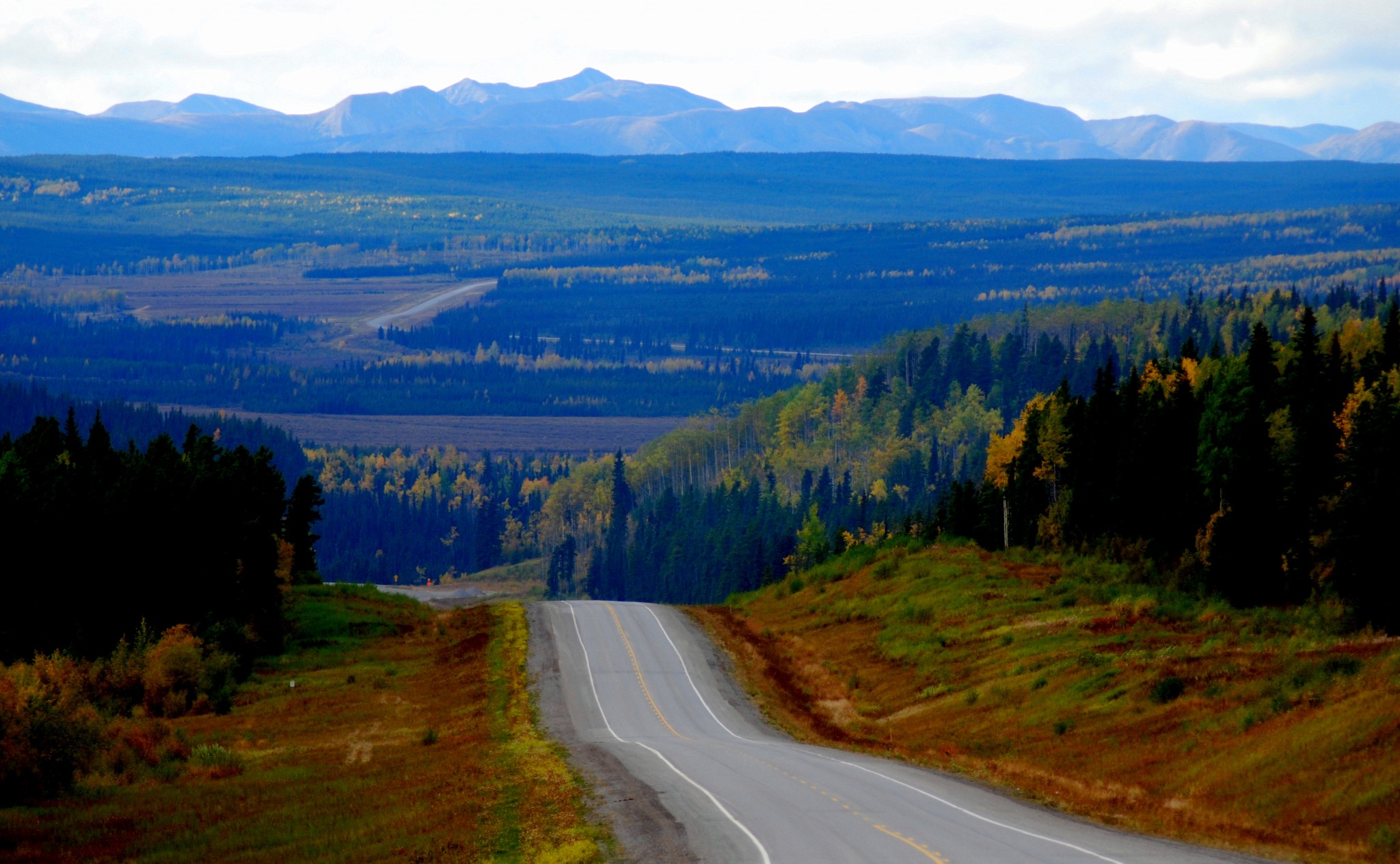 This post continues our list of North America’s most scenic highways.  In this issue you’ll find Scenic Highways 11 through 15.  Please use the comments button to share your thoughts on the highways we’ve included and perhaps those we’ve omitted.

We’ll start out with what may be the ultimate North American road trip, then head to the Midwest.  Scenic driving in the Midwest?  Absolutely!

Driving the Alaska Highway isn’t just a road trip – it’s a full-on adventure.  If this trip isn’t on your bucket list, it should be.  The good news is that you can make the trip in just about any vehicle in decent condition.  The heart of the adventure is in this section, which is about 490 miles long and takes a full day to drive.  I made this run in September 2007 in a Buick I’d rented at Calgary Airport.  If I were doing it again, I’d shorten the distance by spending the night at Watson Lake; that would allow more time to enjoy the drive.  From there, it’s easy to make it to Whitehorse the following day.

The Alaska Highway – formerly the Alcan Highway – was built as a defense project during World War II.  Brutal winters and permafrost make it a challenge to maintain, but it’s in generally good condition.  In some sections, you can drive 50-60 mph; other sections are badly potholed and require extra caution. You’re likely to encounter construction and temporary gravel sections in summer.  The highway is essentially a narrow thread of civilization surrounded by thousands of square miles of wilderness.  You get the impression that this veneer of civilization’s existence is on loan from Mother Nature.

At milepost 283 – Mile Zero is at Dawson Creek – is Fort Nelson, a town of 6,000 with all visitor services.  Shortly beyond Fort Nelson, four things happened when I drove the road.  First, the road turned west and climbed into the northern reaches of the Rocky Mountains.  Second, the fall foliage became spectacular.  Third, it began to snow.  And fourth, the animals appeared.  This is probably the single best drive anywhere for observing wildlife.  Nowhere I’ve been even comes close!  I saw moose, bears (small ones), mountain goats, caribou, bison and stone sheep.  They weren’t hard to spot; often, the animals were standing in the road.  Ever been in a caribou jam?

There’s very little traffic on the highway, although it’s steady.  In late September, a vehicle would pass by every 10 or 15 minutes.  There are a few commercial trucks using the road.  The only settlement that could be called a “town” along the way is Watson Lake, just beyond the B.C.-Yukon border.  In addition, there are small lodges/cafes/gas stations at regular intervals.  As you might expect, the people are friendly, and the gas prices are obscene.  Lodging is somewhat expensive, as is food.  Campgrounds are abundant.  The Alaska Highway is open all year, but you don’t want to mess with Mother Nature, do you?  If you’d like to meet up with other travelers, go to the signpost forest in Watson Lake.  Everyone stops there.

If you’re taking this trip, do some research first.  A great source is the book called The Milepost.  You can buy it from Amazon or major bookstores.  Google it, and you’ll find tidbits of its content online.  Also, consider returning via the Cassiar Highway (BC 37), which cuts off near Watson Lake and leads to Prince George via the Yellowhead Highway (BC 16).  The Cassiar is narrow but paved.  The distance is about the same, but it lets you avoid retracing your steps.  At Meziadin Junction, you can detour west to Stewart, B.C., and Hyder, Alaska.  Where else do you go south to get to Alaska?  Hyder is a great offbeat destination.  We’ll have a special post on it in the future.

This road trip takes you along the Mississippi River through its most attractive sections.  While the entire route is designated part of the Great River Road, I’ve created an arbitrary routing that combines the best of the region.  At 367 miles, this is a fairly long drive, probably too long to be done in a single day.  You also may want to just drive part of it.  The route is easily accessed from Chicago, St. Louis or Milwaukee, and its northern end is less than an hour’s drive from the Twin Cities.  If you aren’t familiar with the area, you’ll be surprised at how scenic this country is.  Summer and fall are the best times.  I’ll be driving the northern portion in July.  Maybe I’ll see you there; just look for the blue L.A. Dodgers cap.

The best-known and most popular high altitude highway in North America is Trail Ridge Road in Rocky Mountain National Park.  On a summer afternoon, it can seem as if everyone is on that road.  I once saw it literally bumper to bumper on a summer Sunday.  I’d been to a conference in Vail and had to fly home that night, so this was my only chance.  Still, I should have known better.

However, you, podnuh, are smarter than I was that day.  You’ll head for Independence Pass for that same alpine experience minus the hordes, with the added bonus of being in Aspen when you get to the other side.

Here’s your plan:  Starting in Denver (which just about everybody does), take I-70 west through the Eisenhower Tunnel to Exit 195, then head south 22 miles to Leadville, which is the highest town in the country at over 10,000 feet.  There, pick up US 24 and continue south to the junction with SR 82, then turn right.  The road runs past Twin Lakes up a deep canyon, then twists its way up to the summit before dropping down into the Roaring Fork Valley and Aspen.  The summit is 12,093 feet.  That puts you above timberline in the alpine tundra.  Up on top, you’ll find a big turnout with great views, exhibits and ample parking.

Allow two hours for this scenic drive.  The road is fine for cars, great for motorcycles, and okay for RVs.  (Just don’t get in front of me, please.)  Last time I made this drive, I passed at least 100 bicyclists headed uphill toward the pass.  Keep an eye open for them when you go.  The highway closes in winter.  There are no services between Leadville and Aspen.  You’ll find plenty in Aspen; just bring money.  Lastly, skip this drive if you have respiratory issues.

I love Quebec.  It’s a chance to visit Europe without leaving North America.  Traveling here, you really feel like you’re in a foreign country.  Sorry, Canadian readers:  Most U.S. visitors are very comfortable with the culture and lifestyle of English-speaking Canada.  This, however, is different.  This drive can be done in one full day; you may want to allow two, with a stop at La Malbaie.

The Charlevoix region begins just east of Quebec City, which is the soul of French culture in Canada.  It’s drop-dead gorgeous, with forested hills sloping sharply down to the St. Lawrence shore.  Once you pass offshore Ile d’Orleans, the St. Lawrence is so wide, you can’t see the other side.  That gives this scenic highway more of a coastal feeling than a river drive.  Leave Quebec on Autoroute 440, which becomes Quebec Provincial Route 138 as you exit the city.  It’s a straight, fast shot to the attractive village of Baie St. Paul.  There are three worthwhile attractions along the way.  First is Montmorency Falls, which are beautiful but more developed than I’d prefer.  They’re illuminated at night, and you can see them from the Promenade in Quebec.  Second is a bridge to Ile d’Orleans, a rural island in the middle of the St. Lawrence, with farms, vineyards and cute villages.  And third is the village of St. Anne de Beaupre, whose huge, twin-towered church can be seen for miles and is the site of an important pilgrimage.  Visitors are welcome.

Baie St. Paul is an art colony.  It’s a great place to stop, have lunch and browse, but be prepared to fumble around if you don’t speak French.  In fact, this entire region is strongly francophone.  Most people in this region don’t speak English.  Many who do, won’t.  The folks here don’t much like English-speaking Canadians, but they’re generally friendly to Americans.  I always wear my LA Dodger cap or my UCLA sweatshirt.  I know about 20 words of French, including the “polite” words and how to order a meal.  My wife bought me a phrase book, so I can also say, “Madame, you are on the wrong train.”  So far, so good.

Beyond Baie St. Paul, PR 138 swings inland; you should stick to the coast road, which is PR 362.   The two routes rejoin each other at La Malbaie.  St.- Simeon, about 17 miles farther, is the end of my scenic route.  From there, you can head back the way you came; continue downstream, crossing the Saguenay Fjord to Tadoussac by ferry; or turn inland on PR 170.  If you take the third choice, be sure to stop in the village of Petit-Saguenay, which is considered one of the most beautiful villages in Quebec.  Nearby, the Saguenay River is a mountain-lined fjord where whale-watching is a popular pastime.  There’s also a ferry to the south shore of the St. Lawrence (which is much less interesting but offers access to the Maritime Provinces and a freeway back to Quebec City).

This is the route from Vancouver to Whistler.  It became well known when the 2010 Winter Olympics were held there.  However, few people venture beyond Whistler.  You, however, will, and be glad you did, because it’s a great drive.  If you’re coming from the United States, Seattle is a good starting point.  From there, it’s about 2 ½ hours to downtown Vancouver.  The drive as described below will take about 3-4 hours, depending on stops.  It’s suitable for all types of vehicles.

BC Provincial Route 99 is the designation for this route.  It actually begins at the US border.  We’ll pick it up where the Lion’s Gate Bridge leads from downtown Vancouver to West Vancouver and Horseshoe Bay.  Follow 99 along the shore of beautiful Howe Sound to Squamish.  You pass the BC Mining Museum and 1,000-foot-plus Shannon Falls.  Squamish is famous for windsurfing and other outdoor activities.  From Squamish, Highway 99 climbs to Whistler (about 70 miles from Vancouver), where you might want to stop for a latte or microbrew.  After you tear yourself away from that scene, you’ll soon find yourself in Pemberton.  This is a picturesque farming town in a valley surrounded by snowcapped peaks.  How rural is it?  The McDonalds has hitching posts!  While Pemberton looks bucolic, it’s begun to gentrify, thanks to its proximity to Whistler.

From Pemberton, the highway skirts Lillooet Lake and climbs into the mountains, passing gorgeous Duffey Lake.  As you continue through the mountains, the forest disappears, and you find yourself in just about the closest thing to a desert you’ll find in Canada.  This is ranching country, the far southern end of the legendary Cariboo Region that extends north all the way to Prince George.  At Lillooet you’ll find the first services since Pemberton.  Not far beyond that, Highway 99 ends just north of Cache Creek.  There, you can head south on the Trans Canada Highway through the rugged Fraser River Canyon back to Vancouver.  If you’re headed east, the Trans Canada will take you to Kamloops, Banff and beyond.  PR 97 goes north to Prince George and the Alaska Highway.  Most people loop back to Vancouver; this trip is a bit long to do in a day; I’d suggest one overnight stop.  Cache Creek has a couple of motels.

Welcome to Benefit Street – the most impressive neighborhood of END_OF_DOCUMENT_TOKEN_TO_BE_REPLACED

This week, Road Trips with Tom steams down the mighty END_OF_DOCUMENT_TOKEN_TO_BE_REPLACED