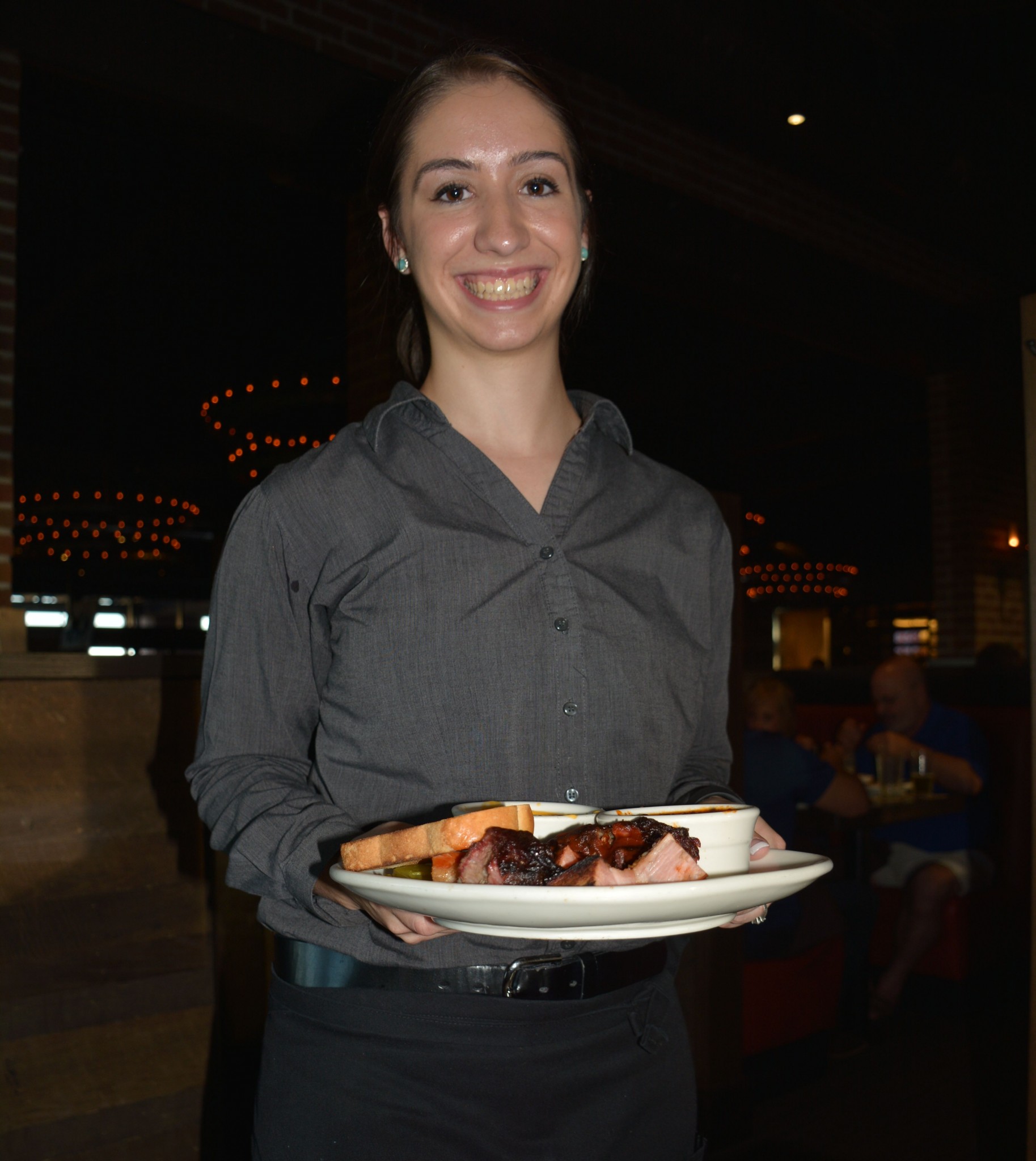 We interrupt this road trip blog to focus on another topic that generates excitement and anticipation – food!  And what could be more American than good ol’ barbecue?

If you’re a barbecue lover, you know that ‘cue is has dozens of styles reflecting various parts of the country.  People in Memphis, Chicago, North Carolina and Texas will tell you only they know how to prepare it.  The same is true for Kansas City, which is the focus of our comparison.  As the blog owner and entire staff, I’ve nominated myself food critic.  To prepare, I ate at Kansas City’s three top-rated barbecues.  This, of course, was a tough job, but someone had to do it.

Barbecue in central Texas is about brisket and sausage.  In Memphis, it’s pork ribs and even barbecue spaghetti.  In the Carolinas, it’s sliced or pulled pork.  What’s different about Kansas City barbecue?  For one thing, KC pitmasters prepare a wide variety of meats:  Beef, pork, chicken, turkey, ham and even fish.  Second, it’s always served with sauce – no dry rubs here.  And third, KC has one unique offering called burnt ends, which are pieces of tender meat cut from the ends of a brisket, pork or ham.  In the photo above, my server Lauren at Jack Stack Barbecue brings my burnt ends dinner.

The legendary Arthur Bryant opened his restaurant in 1946 and moved it not along afterward to its current location in an iffy neighborhood east of downtown.  Bryant died in the ‘80s, but his family has continued the business.  Recently, a second location was opened near the Kansas Speedway.  New Yorker food critic Calvin Trillin once named Arthur Bryant’s “the best restaurant in the world.”

The upscale member of our trio, Jack Stack opened in 1974 and now has five locations – four in Missouri and one in Kansas.  It does a big nationwide business shipping barbecue.  Jack Stack has been featured on The Food Channel and was named “Best Restaurant in Kansas City” by the Zagat Survey.

Formerly Oklahoma Joe’s, the restaurant began in a converted gas station in Kansas City, Kansas, in 1996, after the owners won a series of barbecue competitions.  It’s been featured on the Travel Channel’s “Man vs. Food” show.  In addition to the ex-gas station, Joe’s has two additional Kansas locations.

The only fair way to compare these three barbecue giants would be to eat exactly the same thing at each.  Forget that!  My idea of fairness is to tell you that all three are terrific, and you can’t go wrong at any of them.  I’ll summarize my experience at each and point out a few differences.

All three BBQ meccas have web sites with locations, directions and menus:

I had lunch Wednesday, July 15, at the Kansas Speedway location.  My flight home was later that afternoon, and this location offers a straight shot to the airport.  At Bryant’s, you order and pay in a cafeteria line.  I had a barbecue ham sandwich with a side order of beans and a fountain drink (see photo).  The tab for that was a whopping $18.22.  But the ham was probably the best I’ve ever had, and there was so much I couldn’t finish it.

I had dinner at the Jack Stack in Lees Summit, Mo., on Tuesday, July 14.  It’s a big restaurant, yet I had to wait 15 minutes for a table at 7 p.m.  Jack Stack is a full service restaurant, meaning you have a server who takes your order, brings your food, and processes your payment.  I ordered the burnt ends dinner on the recommendation of Lauren, my server.  I also had beans and a unique side dish called “cheesy corn bake,” which was very tasty.  My tab was $21.46 plus tip.

I had dinner at Joe’s location in Olathe, Kansas, Wednesday, July 8.  Went straight there from the airport after landing.  I had Joe’s famous Z-man sandwich consisting of sliced brisket, provolone cheese, an onion ring and sauce.  Like Arthur Bryant’s, Joe’s is set up like a cafeteria.  By the time the line gets to the cash register, your food will be ready.  And the line was long, even at 7:30 on a week night.  It took about 20 minutes to get my food.  I also had a side of beans and a drink.  The tab was $14.89.

The beans were very similar at all three – a three-way tie for best I’ve ever had.

Please keep in mind that this comparison was opinionated and subjective.  I don’t think you can go wrong at any of these outstanding establishments.

An interesting conclusion:  The difference between Kansas City’s top three barbecues and a chain operation like Famous Dave’s isn’t huge.  And chances are, you have a Famous Dave’s closer to you than Kansas City.

Welcome to Benefit Street – the most impressive neighborhood of END_OF_DOCUMENT_TOKEN_TO_BE_REPLACED

This week, Road Trips with Tom steams down the mighty END_OF_DOCUMENT_TOKEN_TO_BE_REPLACED